The premise of this new cookbook is very much in the title. In this colourful new release, Preston brings together our favourite, flavourful dishes from around the world. Some of the recipes are in their classic style, others have a special ‘Matt twist’. They’re all accompanied by the intriguing and myth-busting stories behind them.

To celebrate the release of Matt Preston’s World of Flavour we’re pleased to bring you this, the first of two extracts from the book. It’s time to don the apron and take a crack at Preston’s Jerked Chicken.

The local legend is that Jamaica’s Blue Mountains earnt their name from the barbecue smoke that constantly hung over the range, and it is from here that the famous Jamaican tradition of grilling spicy jerked meats comes.

Jerk itself is a traditional cooking method that originated with the Maroon people of the area. These communities date back to runaway slaves who joined with the indigenous Taino people in Jamaica’s inaccessible interior to evade Spanish or English slaveholders.

The Maroons predate the English capture of Jamaica from the Spanish in 1655, but their numbers rocketed immediately following the invasion as slaves took the opportunity to escape once the Spanish left and before they could be put to work by the new colonial government.

The Taino peoples’ traditional way of cooking or drying meat to preserve it was on a raised lattice of green wood – normally local pimento wood, from the tree that gives us allspice berries. We know this because when Christopher Columbus first landed in the Caribbean in 1492, he saw Taino people cooking meat on a rack of intertwined green wood sticks raised over a fire. It immediately earned the name barbacoa in Spanish, taken from the Taino word for such a grill.

Of course, back when the Maroons were hiding out in the country’s mountainous interior, smoke would have been an obvious signal to the colonial militias that sought to eradicate or re-enslave them. Thus the slow-cooking and drying of meat became something that was done in ground ovens, where the smoke would be contained, rather than on green wood grills. It was a similar approach to a Maori hāngī or Fijian lovo. The meat was usually wrapped in agave-like maguey leaves before being covered in earth to keep in both the heat and the smoke. The pimento wood used for the fires in these pit ovens, and indigenous Scotch bonnet chillies, gave jerk its signature flavour, while the roasted maguey leaves would impart a caramelly sweetness.

When the Maroons no longer needed to fear capture, they returned to slow-cooking meat over the fire with grills made from green pimento wood. When the technique was exported, the absence of the signature pimento wood meant homesick Jamaicans improvised by using the tree’s dried allspice berries in a spice rub to bring in some of that flavour.

The history of jerk is so intertwined with the history of barbecuing that it is practically an ancestor of everything we cook over coals or gas in our backyards today. Thus, the Taino peoples of Caribbean islands like Jamaica can claim to be the creators of the barbecue. However, if we trace the history of jerk, we can see that this technique is much older, and the first barbecues may have been born further south.

Most scholars believe that the Taino arrived in the Caribbean from South America. The Arawakan language group, of which Taino is considered to have been a part, stretched from the Colombian Andes to the northern Brazilian coast and included some of the Amazon basin. The circum-Caribbean theory espoused by American anthropologist Julian Haynes Steward posits that the Taino came to the Caribbean from the Andes.

Here in Latin America, Europeans also saw indigenous peoples cooking on a grill made of green sticks, and called it boucan, after the Tupi term for the technique (buccan). The Tupi are another major language group from northern South America. This shows us that the technique of drying, smoking and cooking meat on a grill was a common practice in the region from where the Taino are thought to have originally come.

The most plausible explanation for the origin of the words ‘jerk’ and ‘jerky’ is that they come from the Andes and the local Quechuan word for the smoky, slow drying process, charqi.

All of this seems to point to the fact that the Taino brought the grilling techniques of South America with them when they migrated to the Caribbean.

Interestingly, the process of underground cooking of ingredients wrapped in leaves like maguey is still common in Mexico under the name barbacoa. It is not certain whether that technique originated locally, or spread up from Central America or across from the Caribbean.

So, with all this evidence, linguistic and otherwise, it seems the origins of barbecue and jerk were in South America and not the Caribbean, so I don’t feel at all guilty putting a local spin on it by amping up the spices! 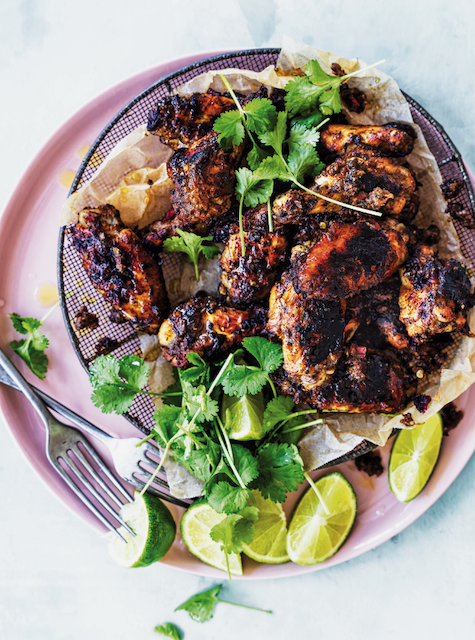 Blitz all the jerk marinade ingredients in a food processor until a smooth paste forms (the mixture is a wet paste).

Place the chicken in a glass or ceramic bowl. Add the marinade and toss to coat. Cover and place into the fridge for at least 30 minutes, or overnight, to marinate.

Preheat a barbecue grill on medium heat. Drizzle the chicken with oil. Add to the barbecue grill. Cook, turning regularly, for 3–4 minutes each side over direct heat, then move and cook over indirect heat for 15 minutes until cooked through. Alternatively, once you have given the wings some colour on the grill, transfer to a roasting pan and cook in the oven at 180°C (160°C fan-forced) for 10 minutes until cooked through. (Keep an eye on the little wingette pieces, as they will take less time than the larger pieces. When these are cooked, move them to the side of the grill to keep warm while the larger pieces cook through.)

Pile up your chicken on a serving platter and sprinkle with coriander. Serve with lime wedges.

TIPS
If you have a bit of time and don’t like tendons around the exposed top of the bones in your wingettes, they are easy to remove – just cut the cartilage and bone. Then ease back the flesh down the bone, cutting any cartilage still attached. Now pull out the bones while easing down the meat. When the bones have been removed, roll back the flesh so the skin side faces out.

For a more authentic and far hotter burn, use Scotch bonnet or habanero chillies instead of long red chillies. You can also serve these with buttered soft bread rolls and some sour cream, which will tame any savage heat and allow the spices to shine.

Food nerd fact
The Tupi word boucan was used by both the Spanish and French to refer to the lawless hunters who set up camps on Tortuga and Hispaniola to hunt wild pigs. They cured the pig meat and rendered the lard to sell to passing ships that needed to resupply their stores.

Given that the area was a hotbed of both piracy and state-licensed corsaires from France and privateers from Holland and England all preying on the Spanish gold galleons, and that many boucan traders signed up to work for privateers like Sir Francis Drake, the name boucaneer or buccaneer became a synonymous with being something of a pirate.