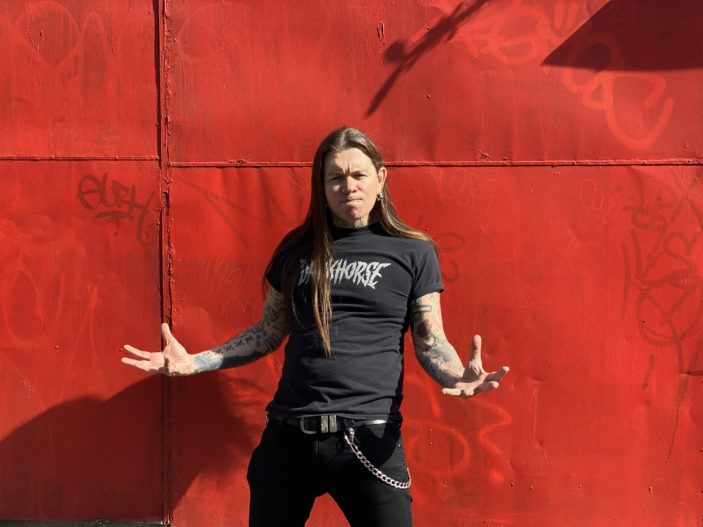 Since exploding over the internet with his isolation cooking videos in early 2020, Sydney comedian, musician, YouTuber and now award-winning, bestselling author Nat’s What I Reckon has been riding the wave of success with style.

The swearing tattooed rocker has been creating content for almost a decade, uploading tongue-in-cheek criticisms of cultural norms and societal politics to a fanbase in the hundreds of thousands. Now with an audience of over 2.5 million, Nat has released his second book, Death to Jar Sauce: Rad Recipes for Champions. This collection of 25 awesome recipes is complete with his trademark humour and crazy drawings by his pals Bunkwaa, Glenno, Warrick McMiles and Onnie O’Leary.

Nat’s previous book, Un-cook Yourself: A Ratbag’s Rules for Life, regaled life stories and taught lessons that he learned the hard way with a handful of illustrated recipes in between. The book was shortlisted for General Non-fiction Book of the Year at the Australian Book Industry Awards and won the Booktopia Favourite Australian Book Award for 2020 – the proceeds of which he donated to Beyond Blue. This time around, it’s all about the cooking but with the same no-nonsense attitude we all know and love. 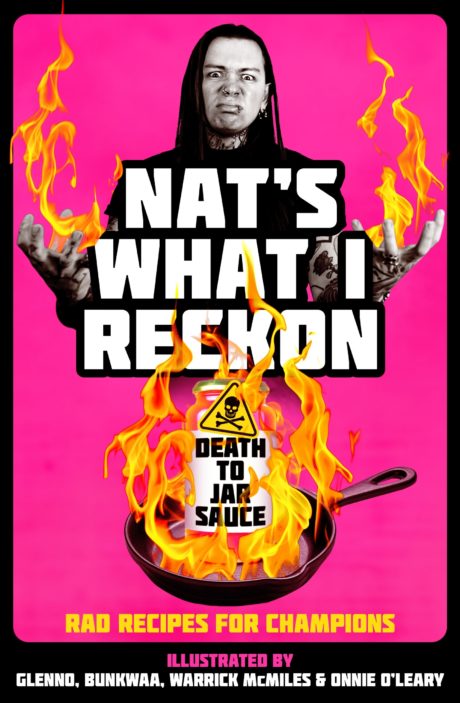 We had a chat with Nat about the book and the many other things he has going on to get a better understanding of how the legend manages it all.

First of all, congratulations on the new book! How does it feel to have a personally tailored and awesomely illustrated cookbook of your own?

It feels pretty bloody bananas. I still don’t quite understand how I’m the bloke who ended up with his own cookbook, but I count myself a very lucky fella indeed.

Especially lucky to have such amazingly skilled mates to turn my jokes into incredible illustrated episodes.

Death to Jar Sauce is a collection of 25 kick-ass recipes for champions everywhere to add to their arsenal. Do you have a dead-set go-to recipe, or is it like choosing a favourite child?

I don’t have any kids so thankfully I don’t have to make that decision. The book is kinda all my favourites at once I suppose. It’s a stack of no-bullshit recipes, that, depending on what you’re feeling like, I’m hoping will include your new bloody favourite too.

You’ve featured the ungodly Eggmaster in your latest video and even in your live shows with hilarious results. Have there been any recipes you’ve come across recently that either blew your mind or made you think ‘what the f*ck is that sh*t?!’?

Absolutely every recipe in the Eggmaster book scared the absolute fucking shit out of me.

One of my favourite things at the moment is something that Jules made me, which was a killer chicken dish with poached pear.

You have also recently released your own trivia boardgame, Yeah Nah. What gave you the idea to create it?

It was a bit of a team effort that one. I am shit at trivia and thought wouldn’t it be funny to make a trivia game for people that are shit at it.

In addition to a loved YouTube personality and amazing cook, you’ve also become an advocate for mental health. What are some things that have helped you battle on through the past 18 months?

Talking to Jules, my therapist, fucken heaps of exercise and rock n roll.

Music is obviously a big part of your life and you mentioned in your last book that you are trying to be open to more styles. What have you been jamming lately and is there anything you’re looking forward to?

Don’t mind a bit of cheeky Michael Bolton in the shower in the morning, peppered with some death metal to get a huge vibe going – really sets a wild pace for the day.

Of an arvo, I crank a lot of old jazz records and 90s hip hop.

I have a pretty panicked music taste.

On that note, you’ve also been busy making a new album on top of everything else. How do you find the time for all of this and still churn out incredible stuff?

Yeah, the infamous unfinished DBX album. That’s been on the back burner for a little while we get all this other stuff sorted. It’s flat chat over here, haha.

Your brutal yet hilarious social commentary on the absurdities of everyday life is one of the biggest appeals of your work. Do you think one of the reasons so many people follow you is because you say what everyone else is thinking?

I hope so. I think a bit of cutting the shit and having a good bloody laugh at the same time seems to be translating well. Stoked on the gang that’s hanging with us on the channel… love ya’s.

From cooking in your kitchen to raiding Area 51, what’s next on the agenda for Nat and Co.?

Some things I can’t mention yet, but what I can say is heaps more swearing, touring and making stacks of awesome videos.

With the country slowly emerging from lockdown and borders reopening, it’s a great time to pick up a copy of Nat’s latest book and try your hand at some of these incredible (and easy!) recipes for anyone you want to impress. Whether it’s Honey B*stard Chicken, Get F*cked Roast Potatoes or Frownie Reversal Orange Chocolate Brownies, Death to Jar Sauce is complete with killer recipes, handy culinary tips and a few solid laughs to see you through the tough times. Good onya, Champ!

Death to Jar Sauce: Rad Recipes for Champions is available now from Penguin Australia. Snag yours from Booktopia HERE.