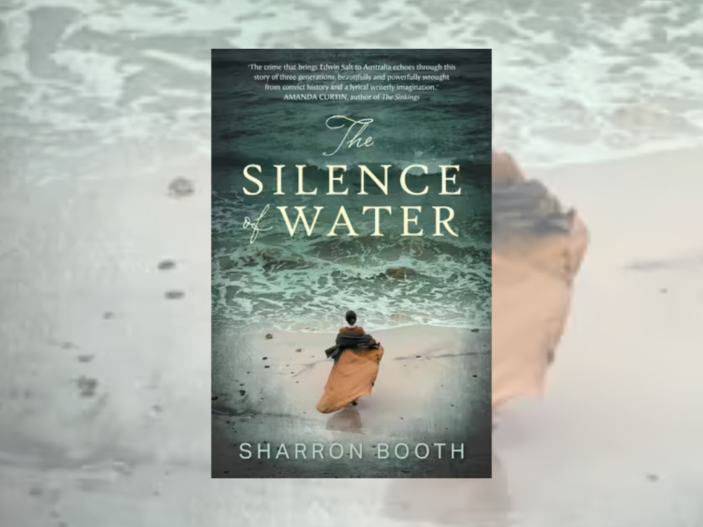 In 1906, Frances (Fan) Johnson moves from Adelaide to Fremantle with her family so that her mother, Agnes, can take care of her estranged father. Edwin Salt has been thrown out by his wife, Annie, and everyone believes that he does not have much longer to live. Though Agnes is estranged from her mercurial and secretive father, she feels obliged to take him on as a boarder.

There are more opportunities for Fan’s father to work on the port in Fremantle anyway; and so, the family of five move across the country and become a family of six. At first, Fan is angry that her life has been uprooted for the sake of a family member she’s never even heard of before. But, before long she is fascinated by her grandfather and the mysteries that seem to surround him, dark as they prove to be.

Sharron Booth’s debut novel, The Silence of Water is a braided rope of a historical novel, weaving together the stories of Fan, Agnes and Edwin to expose the legacy of a terrible secret on one Australian family. The novel was shortlisted for the 2020 TAG Hungerford Award administered by Fremantle Press, and picked up by them for publication as a result.

Fan’s story follows the young girl as she bonds with her grandfather and begins to tease loose the secrets that have haunted him for half a century. Agnes’s story shows the middle part of Edwin’s life, his starting of a second family in Fremantle in the late 1800s, and their gradual estrangement after the death of his wife Cath. Finally, the third story is that of Edwin himself, and starts in Lichfield in 1840. Edwin, the son of a tailor, is one of five children, though he is the closest to his sister Eliza.

The reader follows Edwin as he escapes the family business to make his fortune as an excise man. It is while he’s travelling for work that he meets and falls in love with Mary Ann, his first wife. This part of his life sets in motion the great secret of the novel, and it is this part of the story which Fan starts to uncover in the front room of a house in Ellen Street half a century later.

There is a sense throughout this novel of a great schism; Edwin’s life before the crime that saw him transported and Edwin and his families’ lives after almost feel like two different stories. The two settings are both rich and well-researched, using the full five senses to build facsimiles that feel incredibly accurate.

Booth captures the heat of Australian summer and the relief that accompanies being in the water with ease. Rivers, ports and the water in general are almost a central character in the novel, and there is a common affinity with water that is shared by the women of the book through the generations.

One of the most poignant moments in the book is when Fan, on being told that she loves to swim just like her mother, protests that she never sees her mother swim. We, as readers, know why Agnes stopped going into the water; there is a delicious dramatic irony here, as the three points of view allow us to see this complicated family history from a number of angles.

One of the great successes of this novel is in the creation of the character Edwin Salt. Edwin has done some truly horrific, violent things, and yet still believes himself to be a good man, and a victim of circumstance. His protestations, even to his own conscience, sound remarkably like echoes of ‘see what she made me do.’ I can only imagine the challenge that must have accompanied getting inside this character’s head and attempting to write him with sympathy, as it would have been easy to cast him as a caricature. Yet Booth carries it off. Edwin is both the transported criminal, the drunken angry father, and the fascinating grandfather in the front bedroom telling stories to his granddaughter.

If you’re a fan of Amanda Curtin, Meg Keneally or David Whish-Wilson’s historical fiction, you just might love Sharron Booth’s The Silence of Water – I know I did!

The Silence of Water by Sharron Booth is out now from Fremantle Press. Grab yourself a copy from Booktopia HERE.