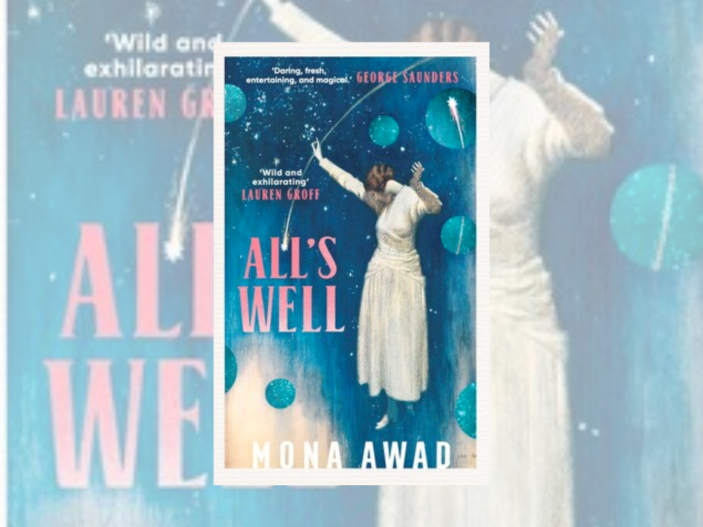 Mona Awad‘s latest novel, All’s Well, tackles one of William Shakespeare‘s lesser known works. All’s Well That Ends Well is considered a ‘problem play’, not least because it sees its heroine, Helen, performing what was known as a ‘bed trick’ to consummate her marriage to her estranged husband, Bertram. But, the protagonist of Awad’s All’s Well relates deeply to Helen. Like Helen, she too has known great pain and suffering, and has known what it feels like to want things and be denied them. She knows what it is to be overlooked.

Once, Miranda was an esteemed Shakespearean actress, but a fall off the edge of the stage saw her career ended and her life changed forever. Miranda is now afflicted by chronic, undiagnosable pain in her hip, leg and back. She often describes the sensation as being like having an overweight man sit on a chair atop her foot.

When the reader first meets Miranda, she is lying on the floor of her office watching YouTube videos on her laptop as snow falls on her from a nearby open window. She is in too much pain to get up and close it. After her accident, her career has ended, and so has her marriage. She is now an associate professor at a college, and has been given the role of director for the drama program’s annual Shakespeare production.

The students want to do Macbeth, but Miranda wants to do All’s Well That Ends Well. She comes head to head with conniving faculty member Fauve and spoilt rich girl, Briana, who gets the lead every year by virtue of the fact that her parents’ donations to the school keep the program going… just. Miranda sees no talent or depth in Briana, and instead favours another student, Ellie, but is forced to cast her in minor roles.

Everything changes one night when Miranda and her friend Grace go drinking at a bar named The Canny Man. After Grace leaves, Miranda is befriended by three anonymous businessmen who offer her a drink called The Golden Remedy. They seem to know things about her life, about her pain, and her frustration to have others believe that her pain is real rather than psychosomatic. In many ways, they are like the three witches in Macbeth. They promise her a change in fortunes so long as she puts on a good show.

As Miranda’s luck changes, we see her descend into an almost manic sense of wellness. She is drunk on how healthy and powerful she feels as she thwarts the mutiny by her cast, snares the affections of set designer Hugo (who bears more than a passing resemblance to her ex) and discovers that she may now have the power to show those who never believed her just how much pain she has actually been in.

Bordering on horror and supernatural, All’s Well takes a while to get to its point; but as a reader, I didn’t mind the build up being slow. Miranda is such a compelling character, and Awad quickly shows how frustrated and tired she is with her lot in life. The relationship with her friend, Grace, is particularly well drawn, as Awad explores the ways Miranda is forced to balance her own need for support with her desire not to be seen as a burden to those around her.

Likewise, Miranda’s disappointment at finding a physical therapist who seems to be willing to believe her and share in her struggle, only to discover that he too believes that her problems are largely mental – and that his treatment methods cause more pain than they relieve. By the time Miranda develops her almost supernatural ability to pass her pain on to others, the reader is so embedded in her experience that they almost cheer for her – despite the fact that she is actively causing harm.

Awad is a skilled literary writer and the novel has echoes of an Atwood novel in her ability to skewer the human experience. Her prose is sharp, smart, and frequently full of dark humour. Through the highly cynical eyes of Miranda, she makes judging others a high art.

The ending to the novel has the qualities of a fever dream, and for a moment, I did find myself worried that we were about to find out – in fittingly Shakespearean fashion- that it was all a dream. While that’s not what happened, I will leave it up to each individual reader to decide whether the ending to the novel is satisfying or not. As for me, I think that this is a book that bears rereading, and might even require it to fully appreciate its conclusion.

Read this book if you loved Hagseed by Margaret Atwood or The Power by Naomi Alderman.

All’s Well by Mona Awad is available in paperback now from Simon and Schuster. Get your copy from Booktopia HERE.