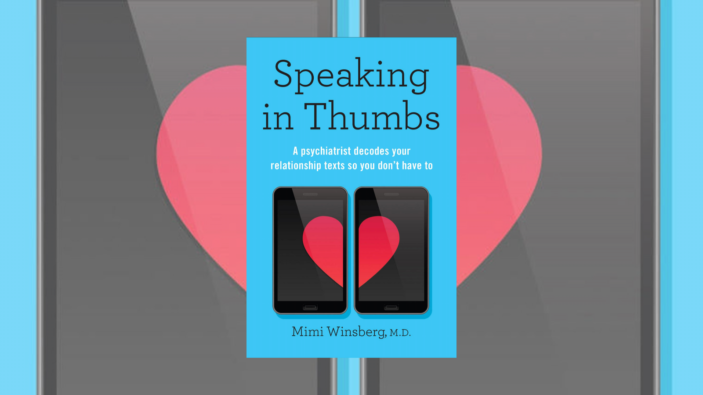 As a psychology graduate and serial online dater the premise of Speaking in Thumbs was appealing. A psychiatrist – herself a fellow dater – dons the best friend cap to decipher text messages and uncover what is REALLY being said. It’s a great idea, but I found it difficult to relate to this, as some of it is quite US-centric.

This is Dr Mimi Winsberg’s first book. She has twenty five years clinical experience to draw upon and she jokingly says she can diagnose people within a certain number of texts. I can relate to this as I do find myself diagnosing people in my daily life. Though I appreciate we should probably suspend judgment.

The book is organised into three separate sections: swiping, syncing and scrolling. It looks at different relationship phases, from the initial swipe and messages, to developing a deeper connection and even to breakups. And, it also considers things like attachment theory and how people may communicate this in the content or frequency of their text. It can be interesting stuff.

Winsberg has a solid bibliography and readers can search out more content, should they want it. Her commentary is a combination of writing about scientific studies and personal anecdotes. The book is designed to instruct readers in how to glean personality traits from potential paramour’s text messages based on OCEAN- openness, conscientiousness, extraversion, agreeableness and neuroticism. While some may find this useful, we are delving into difficult territory, as this should not replace formal diagnoses (in the same way some psychometric tests have received criticism because we can present differently, depending on context and situation).

This title apparently includes real-life text exchanges, which the doctor then dissects. I found myself questioning whether some of these were actually real as some seemed really strange. I also found many of them hard to relate to as they seemed quite different to my own experience. For instance, where are the monosyllabic texters? I am met with this even though I follow Winsberg’s advice and ask open-ended questions. These are the people that would need this kind of book but it’s doubtful they would read it.

I’d be curious to see how conversations between potential Australian couples play out and how they compare to other cultures, including the Americans featured here. I suspect they would differ significantly from what’s on offer here. It would also have be interesting to include a greater breadth of contributors, as the exchanges seem to be largely heterosexual ones. A greater look at complexity would make for a more relatable and insightful book.

Speaking in Thumbs has some draw points but I imagine it’s difficult to offer advice in a one-size-fits-all approach to something as complex as written communication. Our texts may be short but there is so much more underlying stuff, which is why we tend to ask our friends about things.

Speaking in Thumbs includes some facts-based commentary amongst the personal advice and some readers may find this a useful tome, while others may be left feeling genuinely more confused.

Speaking in Thumbs by Mimi Winsberg is available now from Pan Macmillan. Grab yourself a copy from Booktopia HERE.