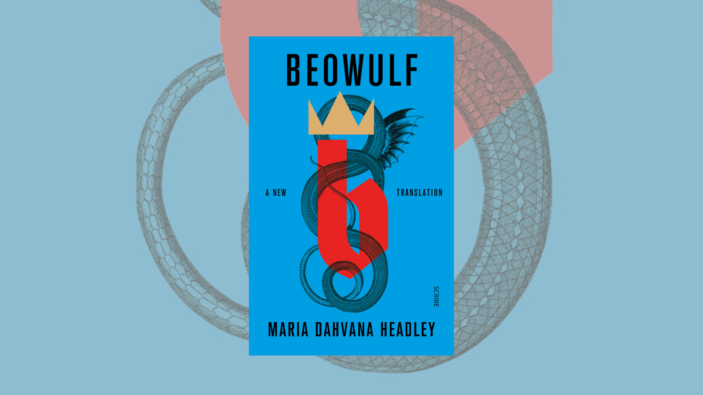 Beowulf is one of those stories that a lot of people think they know. That’s because it’s an iconic work of early English literature. Not only that, there have been countless translations and adaptations in the intervening centuries since the heroic tale was first uttered by a bard. Amongst its translators and adaptors are some heady names, including J.R.R. Tolkien, Seamus Heaney, Neil Gaiman.

Maria Dahvana Headley, the author of this new, contemporary translation, is no stranger to the tale. Her 2018 novel, The Mere Wife, was a novelistic adaptation of the poem. in many ways this translation is a natural successor to that work. Certainly, reading Headley’s introductory remarks, it was born out of Q&A sessions at festivals following The Mere Wife’s promotion.

If like you’re like me, don’t despair, Headley has included a comprehensive introduction before the main text, full of the history and context of the text, and a run down of some of the translations that have come before. In it she also brilliantly sets out her approach to translating the text, and her reasoning behind some of her choices. Some of your more conservative classical scholars might despair of this new translation, but there’s no denying Headley’s arguments for why she’s approached the text the way she has is compelling and persuasive.

What is clear is that Headley’s text contains all the hits: A man who seeks to prove himself a hero; a monster; an avenging warrior and a big ass dragon! What it omits are the outdated tropes rooted in misogyny and gynophobia. In many of the earlier translations, Grendel’s mother, is depicted as a monster and a supernatural force – because of course you can’t have a strong powerful female warrior.

It’s here that Headley’s “feminist” approach is most strongly felt. The supernatural monster becomes a warrior queen, an equal to the heroic Beowulf, and an avenging mother. Something to be feared, certainly, but not because of some supernatural femininity. These are not just changes to sate some agenda, rather they’re born out of research and a close reading of the text. In fact, you could perhaps argue that Headley’s feminist reading of the text could’ve gone further and been more radical.

Another of the radical changes in this new translation is the language. And, it’s here as Headley’s introduction states, she would butt heads with previous translator Tolkien. He argued that any translation should employ language that was “literary and traditional”. But, I find myself siding with Headley and her argument that; “Beowulf is a living text in a dead language”, that it’s “the kind of thing meant to be shouted over a crowd of drunk celebrants”. And, she captures that feeling wonderfully in her translation.

The text isn’t bogged down in archaic language. Instead, it’s peppered with a distinctly contemporary vocabulary. That, isn’t to say it’s not faithful to the original text; it is, but there’s always one eye on a contemporary audience. So there are archaic words transcribed for new cultural contexts, this is Beowulf for a 21st Century audience, so yes words and phrases like “hashtag: blessed” and “swole” will feature. Those conservative translators will be mortified, but I am very much here for it, and again her arguments are sound.

Maria Dahvana Headley’s new translation is bold, exciting and breathes new life into an old classic. With a more nuanced approach to some characters and some inspired language choices, Headley helps Beowulf reclaim its rightful place as a raucous and boozy crowd pleaser.

Maria Dahvana Headley’s Beowulf: a new translation is out now, published by Scribe. Get your copy from Booktopia HERE.