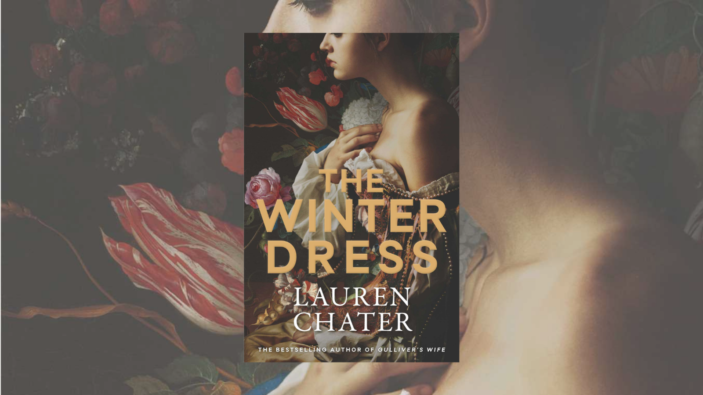 Shipwrecks, court fashions and the Dutch art trade of the 17th Century take centre stage in Lauren Chater’s third historical novel, The Winter Dress. Chater was inspired by a shipwreck discovered in 2014 off the island of Texel, containing a dress perfectly preserved underwater for four hundred years. The dress was later found to have belonged to Jean Kerr, Countess of Roxburghe, a lady-in-waiting to Queen Henrietta Maria.

In the fictional counterpart to this history, the dress belongs to Anna Tesseltje, who began her life as a merchant’s daughter, but was forced to become a laundress after his death. By chance, Anna is elevated to the position of lady’s companion to Catharina van Shurman, a celebrated artist and advocate for women’s education. Anna and Catharina were said to be close, but the discovery of Anna’s dress on a boat belonging to the Dutch East India Company indicates that the pair parted company…

Four hundred or so odd years later, textiles historian Jo Baaker receives a phone call from a childhood friend whom she hasn’t seen since she left Texel at sixteen, after her parents’ tragic death. Bram and his diving crew have found some artefacts on a well-known shipwreck. Among these artefacts is a shockingly well-preserved dress which just might be the making of Jo’s career, but the catch is, she’ll have to go home to Texel in order to see it.

The Winter Dress is a sumptuous novel of Dutch history, evocative of Deborah Moggach‘s Tulip Fever or Jessie Burton‘s The Miniaturist, but with a modern-day mystery element à la Kirsty Manning or Natasha Lester. To read this book is to feel like you are walking through the tapestry lined halls of the von Shurman house, or standing with the aristocracy at a ball held by the Winter Queen; or even diving alongside a hulking wreck in the midst of a storm. Both of the novel’s storylines are evenly weighted; Jo’s struggles to protect her stake in the discovery when other interested parties come sniffing around are just as interesting as Anna’s struggles to live in a world where all she has to her name is an old dress belonging to her mother.

The novel’s focus is on what fashion and textiles can tell us a lot about history and culture. Jo’s frequent frustration at the way this field is seen to be trivial mirrors that of writers whose area of interest is the histories of women; who are more often than not, absent from the historical record. I would have liked to have seen this thread teased out more.

Indeed, the book is almost economical with words in some areas, and while I enjoyed it very much, I wouldn’t have minded at all if there were one hundred or even two hundred more pages. In particular, I would have liked to see the research process in the modern day storyline unfold in real time, rather than having Jo and her colleague’s discoveries revealed in summary; discoveries that the reader had already learned through reading Anna’s parts of the books. There were also a few intuitive leaps for the sake of moving the plot along that might prove a little irritating to those who know how long and arduous historical research really can be.

I loved learning about Jo’s backstory; her complicated relationship with her parents’ memory was a barrier to be overcome before she could truly reconnect with Texel. In learning to understand them better, she seemed to become a stronger person over all. Her friendship with Gerrit, a man from her mother’s past, allowed both Jo and the reader to see that the memories of a grieving sixteen year old are not always the most reliable.

The Winter Dress is a stunning, fast-paced historical novel which is sure to please Lauren Chater fans and attract new readers alike. There’s a little bit of something for everyone; mystery, the hint of romance, court life, shipwrecks.. the list goes on.

It’s the perfect book to curl up under a blanket with, and enjoy with a piping hot cup of tea.

Lauren Chater’s The Winter Dress is out now from Simon and Schuster. Grab yourself a copy from Booktopia HERE.