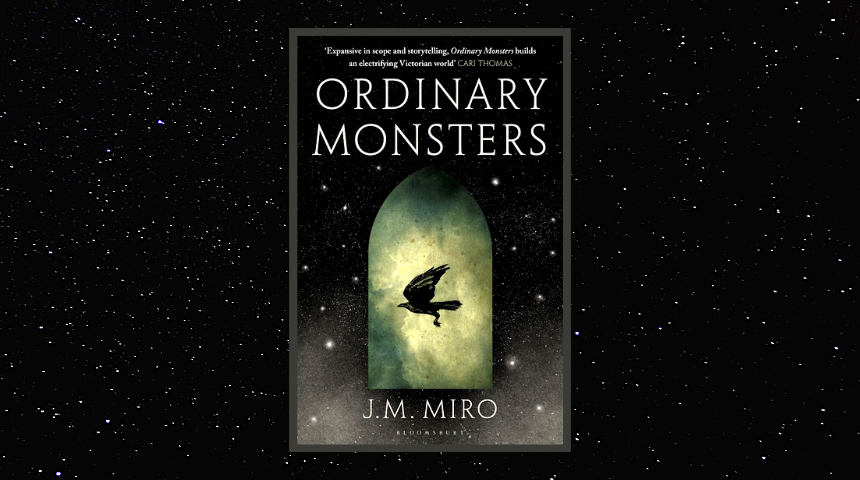 The Cairndale Institute isn’t like other schools. Taking in children with specific skills, known as Talents, it’s not only a chance to grow and learn; but also a refuge from a world not ready for their powers. Charlie Ovid can heal himself from just about any injury. Komako can manipulate dust to do extraordinary things. Ribs can vanish in the blink of an eye. And Marlowe glows with a strange blue light that no one quite understands.

Once located by the glyphic, a mysterious creature living on the Cairndale grounds, it’s the job of people like Alice Quicke to find the Talents, wherever they may in the world. From a travelling fair and a lonely prison in the American South, to the theatres of Meiji-era Tokyo, and through the dark streets of Victorian London, Ordinary Monsters eventually brings Marlowe, Charlie and company to Cairndale, housed in a once grand estate outside of Edinburgh. But when they enter the fold, everything changes. Evil is hunting little Marlowe, and the question of what makes a monster – and what makes a family – is begging to be answered.

The first in The Talents series from J.M. Miro, Ordinary Monsters marks the start of an exciting new dark fantasy series. Feeling a little like a Dickensian X-Men – super-powered children at an isolated school, tracked down by a telepath, anyone? – it’s a rich and detailed opener, filled with fantastic characters and solid world-building.

While the hefty page count might dissuade a few readers, once Ordinary Monsters grips you, it refuses to let go. The action is well written and exciting, and the twists and turns are certainly worth the wait. As the first book in a new series, we won’t get all the answers we’re looking for, but there’s more than enough here to make waiting to find out very frustrating – and isn’t that just half the fun?

It’s worth noting that though its cast is largely made up of children and teens, this is no Middle Grade or YA fantasy. Miro has a talent (no pun intended) for scary monsters and bloody fight scenes that make it distinctly family-UNfriendly. However, if you’re more in the market for reading by candlelight during a thunderstorm, then Ordinary Monsters has you covered.

A highly anticipated read, with rave reviews from the likes of Conn Iggulden and Joe Hill, this is unlikely to be the last you’ll hear of Ordinary Monsters. Grab a copy and get in ahead of the curve!

J.M. Miro’s Ordinary Monsters is out now, published by Bloomsbury. Grab yourself a copy from Booktopia HERE.