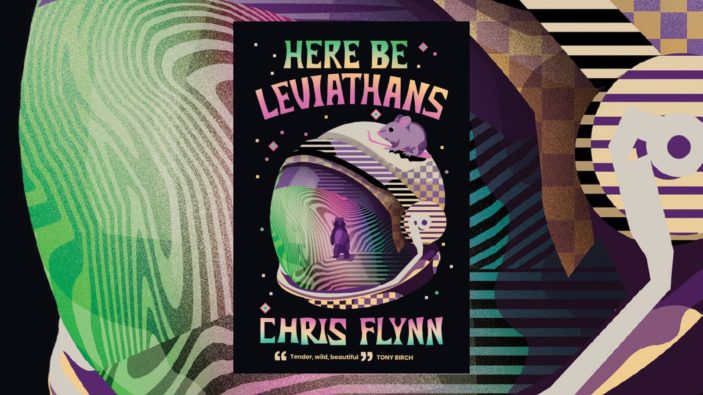 Author Chris Flynn was the mastermind behind my favourite novel of 2020, Mammoth. Now he’s back with a new collection of short fiction/stories, Here Be Leviathans. And, it’s quite probably my favourite book of 2022.

Collected over a period of ten years, the stories in Here Be Leviathans show an author who is full of imagination, daring and who is unafraid to explore and experiment. Flynn has crafted something of a niche for himself in the fiction landscape in Australia and beyond, thanks to his use of non-human narrators – animal and otherwise.

In Here Be Leviathans, we hear from grizzly bears, artistic platypus, and sabertooth tigers, as well as motel rooms and airplane seats. Even the most mundane of locales and objects can be rendered compelling in Flynn’s hands. “22F”, the second story in the collection for example, starts as an almost office based sit-com before develops into quietly moving story about a plane crash, told from the perspective of one of the seats.

As would expect from Flynn, there is plenty of humour to be found within the collection. “Inheritance” (what an opening line!) and “Monotreme” are both a delight and full of snark and larrikinism. “Here Be Leviathans” reads like a wonderful homage to Crichton’s Jurassic Park and Westworld, with two Smilodon Fatalis going head to head with a posse of entitled jerks.

“Alas, Poor Yorick”, another favourite from the collection, proves to be absolutely devastating. Based on real events, the story depicts the final flight of Albert VI, nicknamed Yorick. Another of the collection’s impactful stories is “The Strait of Magellan” which imagines a world overrun by a viral pandemic. Not so much of a flight of fancy these days, but, according to Flynn, this is a story that is six years in the making. It is interesting to think if it would be quite as impactful if it was released into a pre-covid world?

The final story in the collection, “Kiss Tomorrow Goodbye”, is perhaps the most difficult of them all. Stylistically it differs from the others, and coincidentally it’s also the only one with a human narrator. It’s hard work, but once you attune yourself to the rhythms of the piece, it does pay off. It’s a story of endurance, survival and friendship – all recurring themes in Flynn’s recent work.

Here Be Leviathans is a joy of a collection; one that’s brimming with imagination and emotion. It’ll make you laugh, think, and maybe even cry – sometimes all in the same story. A worthy successor to Mammoth, Here Be Leviathans highlights Chris Flynn as one of Australia’s most unique and compelling writers.

Here Be Leviathans by Chris Flynn is available now from UQP Books. Grab yourself a copy from Booktopia HERE.

You can also catch Chris Flynn on the road over the next couple of months as he heads out on the road to celebrate the release of the new book. You can find more information about dates and appearances HERE.