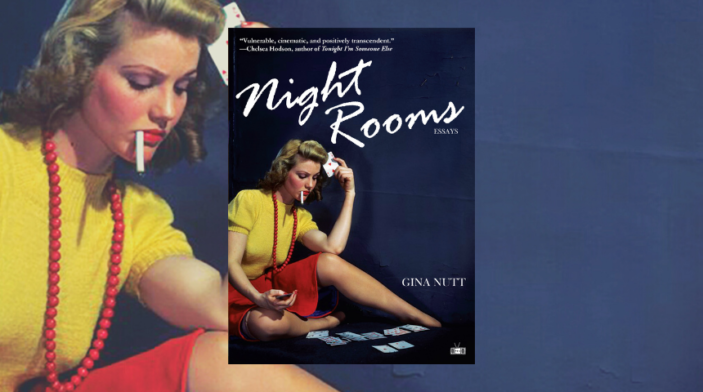 There’s likely an expectation that, given that she’s writing about it, Nutt’s life is packed with adventure or trauma or something generally monumental. It isn’t. But Night Rooms is no less emotionally resonant for it. Nutt’s relatable recollections are made electric, filled with vivid imagery and unexpected analysis.

While reading, it should come as no surprise that Nutt’s background is in poetry collections and chapbooks. Her writing is lyrical and imaginative, and the essays walk a wonderfully experimental line, playing with memory, emotion, and movie references.

As packed with media nods as it is, you’d be forgiven for thinking Night Rooms is more film reviews than personal essays. But, Nutt handles them elegantly, pulling on a film’s thematic thread and tying it to a time, a place, or a feeling with ease. The particular focus on horror films and their associated tropes is a brilliant choice, not only for emotional impact (fear is, after all, very complex), but also as tribute to the emotive and varied nuances of the genre itself.

It’s worth noting that Night Rooms demands attention, and dropping in and out of the collection is not advised. Picking up the threads after a few days away can be a challenge, as readers try to regain a foothold in Nutt’s fragmentary writing. But oh boy, it’s worth it when you do.

Captivating, vulnerable, and defiantly original, Night Rooms is a simply stunning collection. With a stream-of-consciousness style at its core, its a beautiful addition to the personal essay genre, and one that will reward even more with subsequent readings.

Gina Nutt’s Night Rooms is out now, published by Two Dollar Radio. Grab yourself a copy from Booktopia HERE.