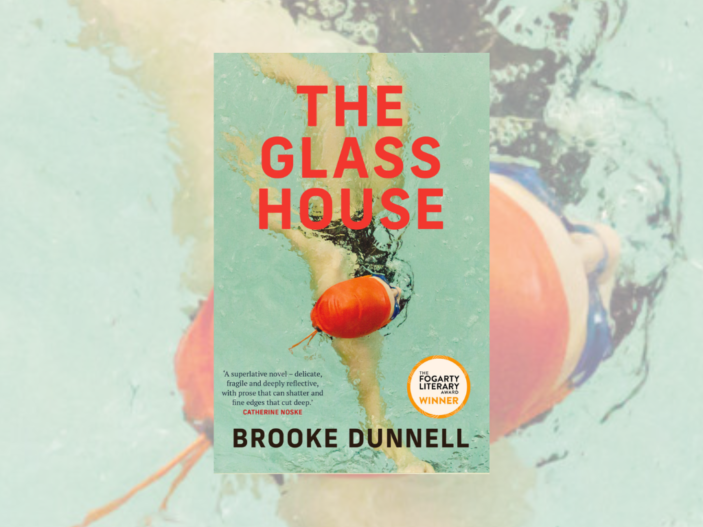 In Brooke Dunnell‘s Fogarty Award-winning debut novel, The Glass House, Julia Lambett returns to her childhood home in Perth to move her father into care. The timing, as is usually the case in such novels, couldn’t be worse. Julia and her husband Rowan have taken to sleeping in separate beds; with some sort of unspoken issue between them that neither wants to discuss. Julia tells Rowan that she doesn’t think they should speak while she is away.

Arriving in Perth, Julia finds things worse than she had expected. Her father seems to be neglecting to properly care for himself or the house. Yet, he is so reluctant to leave that he has purchased new guest room furniture and has adopted a dog – adorably, named Biscuit – who cannot be uprooted to another residence.

As Julia sets to work clearing out her childhood home, and Don digs his heels in further, Julia’s frustration mounts. Enter Davina Weir. A childhood friend with whom Julia has lost contact; Davina seems determined to reconnect and probe the sorer aspects of Julia’s life.

At first, Julia resists. But, loneliness and nostalgia are a powerful mix and she soon finds herself sucked right back in, repeating the patterns of their childhood friendship dynamic all over again.

The Glass House is a compulsively readable domestic noir. It defies classification into any one genre. The prose is literary, the suspense is reminiscent of a thriller, whilst the complex exploration of relationships leans towards the hallmarks of contemporary fiction.

Like a Liane Moriarty novel, Dunnell’s work is preoccupied with what is going on behind the closed doors of suburbia, which can sometimes be shocking, but more often than not is so painfully relatable that it feels like the book is reaching out to squeeze your hand in support.

Julia, as a lead character, feels incredibly realistic, from her petty need to lock the door to her childhood bedroom to keep her father out, to the way she keeps going back to Davina’s even though her brain keeps telling her the woman is not really her friend. Her relationship with step-daughter, Evie, and her mother rounds out a depiction of a modern family that is touching to witness.

Throughout the novel, Julia dreams about Evie being approached by a strange man on a bus; the sense of menace this lends the story is confusing at first, seeming to draw attention from the plot line about Julia’s father refusing to leave. What purpose these sections eventually serve I will leave for the reader to discover. Though I will say if you find them jarring at first; persevere, and pay attention. Though the reveal didn’t shock me as much as I think it was intended to, Dunnell’s use of foreshadowing is very clever indeed.

The Glass House is a great read, and I recommend you pick it up for your next book club.

Brooke Dunnell’s The Glass House is out now through Fremantle Press. Grab yourself a copy from Booktopia HERE.