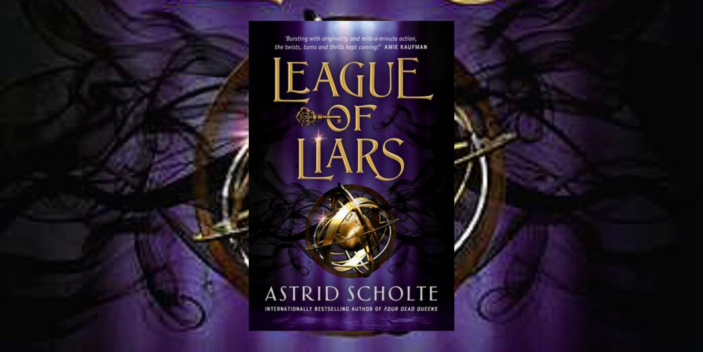 Astrid Scholte’s League of Liars is a YA fantasy thriller full of twists and turns; in which no one can be trusted to tell the truth and everyone’s motives are questionable. It’s a suspenseful page-turner with an interesting cast, told in alternating points of view. But despite its young protagonists, the book doesn’t shy away from the big questions about justice, second chances and what law and punishment is for.

The story follows seventeen-year-old Cayder Broduck who became obsessed with law and order after the death of his mother in a magical accident years earlier. He dreams of one day being a public prosecutor who upholds the justice system and holds criminals to account. To ensure his success, he enlists for an apprenticeship with top defence lawyer Graymond Toyer to learn the ‘tricks’ he uses to, in Cayder’s perception, ‘get criminals off the hook’.

But Mr Toyer has a different idea of what justice looks like; and when he invites Cayder to help him defend three high profile clients, Cayder begins to question what justice looks like. None of the criminals seem to be telling the truth, and none of their cases are as simple as they first appear. The more of their stories he uncovers, the more he realises it’s not just the criminals who are scheming and lying.

This is a crime mystery thriller so it’s hard to talk in too much detail without giving away major plot points. But, I’m impressed that Scholte trusted her audience with the topic of the justice system. It’s a worthy and important conversation. Without resorting to clichés like poverty or mental illness, she examines what leads people to commit crimes, how split-second decisions can dramatically alter the course of a person’s life, and what the purpose of punishment is.

There is a wonderful scene very early in the book where Graymond says to Cayder: “Each year, I see more and more people placed behind bars for the rest of their lives. Each year, I see more guilty verdicts and stricter sentences for crimes that once would’ve resulted in a few months’ imprisonment or even a fine.” In this same conversation, Cayder is reminded that he once committed a crime and was sent to a juvenile reform and given a second chance. What would have happened to him if a second chance wasn’t granted?

These sorts of questions are perfect for Cayder as both the victim and the perpetrator of a crime. Where does the balance lie between justice and reform? What is the purpose of prison? And who is given the power to decide who is and isn’t worthy of second chances? They aren’t easy to answer and Scholte doesn’t offer any easy solutions to them, but she does highlight that ruling powers dictate the answers, and therefore have the power to abuse them to their own ends.

There are some wonderfully solid characters here and the relationships between Cayder and Mr Toyer, and Cayder and his father are superbly portrayed. While some of the romances feel a little forced, the familial and platonic relationships are solid and engaging. I loved Cayder’s friendship with Kema, and Mr Toyer’s role as a mentor and guide. Likewise, his dedication to his sister is both endearing and heartbreaking, given their father has all but abandoned them in pursuit of his work following their mother’s death.

Scholte has once again crafted a read-in-one-sitting thriller that satiates the desire for magic and fantasy while unravelling mystery upon mystery. It’s the perfect blend of suspense and drama, in which no one can be trusted and nothing is as simple as it seems.  If you enjoyed her debut Four Dead Queens, you’re going to love this.

Astrid Scholte’s League of Liars is available now from Allen & Unwin. Grab yourself a copy from Booktopia HERE.