Theatre Review: Once is a joyful, musical celebration, performed with mesmerising passion 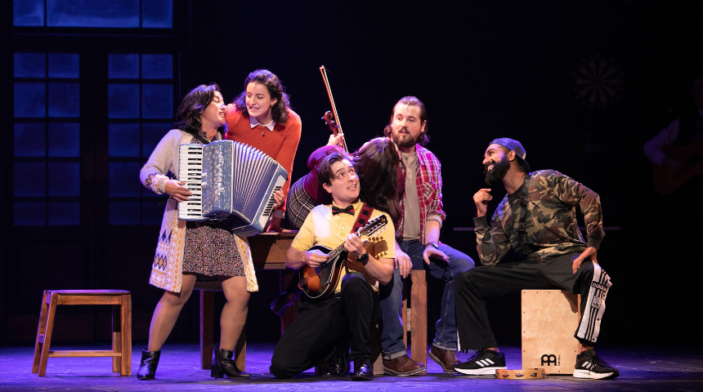 The Australian production of Once, the eight-time Tony Award-winning musical (based on a critically acclaimed 2007 film) has come to The Regal Theatre in Subiaco. It’s a charming, joyous story, and even before the show started, there was a palpable feeling of excitement in the air – assisted by musicians wandering between the rows, playing traditional Irish music, and creating a welcoming, almost pub-like atmosphere. That’s the thing that makes Once particularly special – the cast play all of the music live on stage, there’s no hidden orchestra.

Similar to the original movie by John Carney, Once follows a struggling, broken-hearted Irish musician (Toby Francis) who meets a piano-playing Czech immigrant (Stefanie Caccamo) right at the moment he’s going to give up on his dream – these two main characters are simply called ‘Guy’ and ‘Girl’. The story is set in Dublin, and the way the city is spoken about throughout the show is reminiscent of how New York is often romanticised (as a magical place full of talented people).

The story itself is of course very romantic, but not just in the ‘boy meets girl’ way; it also views the entire world through rose-coloured glasses. Thankfully, the show tiptoes right to the edge of cliché and then pivots, refreshing your palette with realism and witty dialogue. It has a slice-of-life vibe, like peeking into someone else’s world or overhearing a conversation on the street. None of the dialogue feels forced or cheesy, and the jokes elicited uproarious laughter from a completely invested audience.

Music is what ties the story together. Written and composed by the stars of the movie, Glen Hansard and Markéta Irglová, the songs are passionate, lively, and moving enough to make the characters’ connection believable. Although, if you’re expecting any Irish traditional music, you’ll find it’s surprisingly lacking – especially for a piece that leans so heavily into its Irish identity. 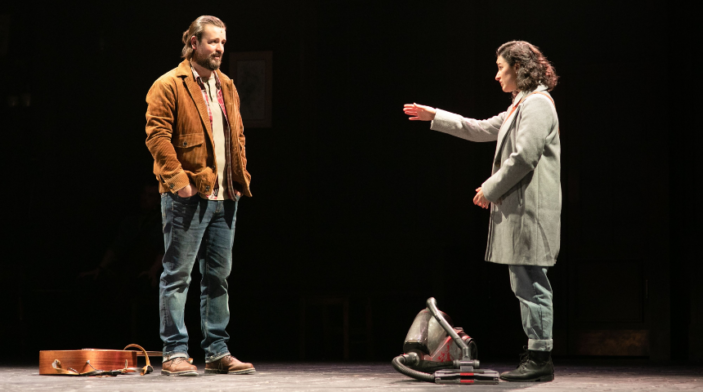 The cast they assembled for the Australian production are intimidatingly talented musicians and every member performed the songs flawlessly. The stand-out by far was Caccamo, who was haunting and almost operatic in her delivery. Her solos tugged at the heart strings, and silenced the awe-struck audience immediately.

Overall, the acting was quite good, but again Caccamo stole the spotlight with her effortlessly funny delivery and an expert subtlety that slowly revealed the depth of her character as the story progressed. She was perfectly complemented by Francis, who gave a solid performance as Guy, but really shone during his committed musical solos.

There was a large supporting cast, with Gus Noakes giving a scene-stealing performance as the hilarious bank manager and Luke Hewitt creating an impactful, moving rendition of Da. However, music shop owner Billy (Rupert Reid)  and Girl’s Czech friend Réza(Victoria Falconer) came across as rather stereotypical and over the top. Their comedy was a real crowd-pleaser, but felt like exaggerated comic relief, which didn’t suit the subtle nature of the show.

One of the most impressive things about the production was the choreography. When the full ensemble of eleven musicians were on stage together, they would perform intricately choreographed dances which had people ducking, weaving, and moving in perfect unison (sometimes on rollerblades). It was mesmerising to watch. Surprisingly, the lighting also played a huge part in the delivery. Usually the cast had to remain on stage and play background music when they weren’t part of a scene, so several parts of the stage would be lit up individually. This highlighted different conversations occurring at the same time and allowed for layered storytelling – it was an elegant technique.

Once is ultimately an ode to love and music, and although there are moments when it verges on rom-com cliché, it remains wonderfully wholesome and hopeful. It shows the world as we wish it was: a place where everyone parts as friends, bankers give loans out of generosity, and following your dream turns out to be easy once you stop doubting yourself. Every scene was performed with vigour, as each cast member threw themselves into the movements and songs with complete abandon. And when a show is performed with such passion, you might find yourself believing in such a world too.

Once is playing at The Regal Theatre until 12 June and then the Darlinghurst Theatre from 24 June to 31 July.