Theatre Review: Margaret Fulton: Queen of the Dessert is a sweet & cheesy look at the cook’s many hats (Bondi Pavilion Theatre until 27th October) 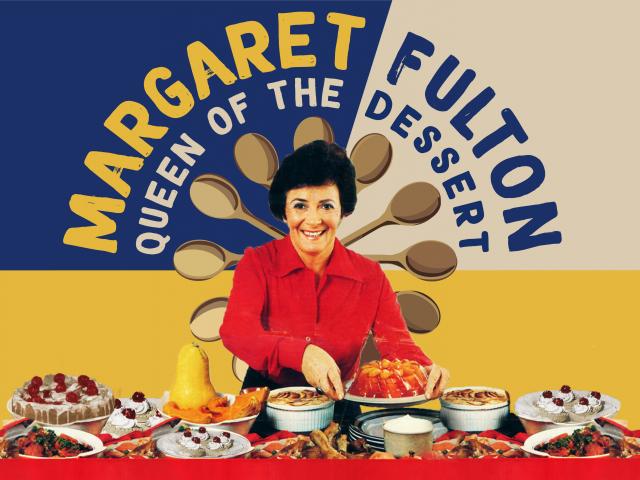 For some people food is fuel, and then there’s Margaret Fulton. This food icon has been teaching Australians how to cook for seven decades. She’s also the subject of the rollicking musical, Margaret Fulton: Queen of the Desserts. The show had its Sydney premiere this weekend and is every bit as tasty and kitsch as Fulton and her delectable, sweet treats.

The inspiration for this musical comes from Fulton’s memoir, “I Sang for My Super.” It is adapted for the stage by writer, Doug MacLeod. He made several refinements to the script following the show’s successful debut at Theatre Works in St Kilda in 2012.

The music is composed by Yuri Worontschak (Mad as Hell) and includes numbers with catchy, almost-familiar melodies. They’re the sort of jubilant, toe-tapping tracks that will get audiences having to restrain themselves from dancing in the aisles. The only exception to this is the “Aussie Icon Living National Treasure Blues,” which is a mouthful to say and a little clunky in its rendering. Musical director, Mary Lennon performs the show on the keyboard, along with minor accompaniment from some recorded pieces.

This year is the sophomore season for the Bondi Theatre Company and this production is directed by Ruth Fingret. The troupe pack a lot of love and warmth into the intimate confines of the Pavilion’s theatre space. The set by Alex Morgan is an authentic throwback to your Nan’s old kitchen, complete with small white cupboards, tessellated lino and old gas hob. It immediately makes you feel like you’re home.

Manon Gunderson-Briggs (Cry Baby) is entertaining as the strong-willed, Scottish-born Fulton. It’s a big role about a diminutive lady and she pulls it off. Rebecca Spicer is sassy and colourful playing Fulton’s friend, Bea.

Clare McCallum reminds me of Magda Szubanski here. She offers up some real comedic chops for Isabella; the old, proud Scotswoman and Fulton’s mother. Alexander Morgan and Brett O’Neill juggle many roles, including the decorative and useless male love interests. But they also rise above such throwaway, pretty-boy statements. Jasmine Sands meanwhile, is a fierce opponent to Fulton in Mandrake the Magician.

It is fascinating to learn about Fulton’s formidable spirit and brilliant carer through this all-singing, all-dancing extravaganza. Fulton was responsible for introducing Australians to new ingredients and methods. It was a time when olives were considered strange, pizza was like an “Italian scone” and standard dinner fare was meat and three veg. This musical is a celebration of the changing Australian palate and a history lesson because it portrays the advancements in kitchen technology.

To watch a show about such a rich, female character is very satisfying. In fact, it’s akin to baking a perfect cake and eating it too. Fulton’s most famous cookbook celebrates its 50th birthday this year. This show is a little messy at times because it condenses a lot of different things into a slim, 90 minute run-time. It shows the many hats Margaret has worn over the years from: cooking teacher to home economist, author to super-star, and more. Things aren’t neat in life and that’s certainly the case in this show and in the opening night performance, because the latter had a few little sound quirks. These didn’t detract from – what is at its core – a human story that is a timeless and resonant one. Margaret Fulton has ensured she’s lived a good life and had one brilliant career.

Margaret Fulton: Queen of the Dessert is a fun night out and a love letter to Australian ingenuity. Fulton is a passionate pioneer and vanguard, and this show is like an ecstatic reception. This musical brims with love and energy, and is almost like chicken soup for the soul. It will inspire, nourish and fortify in the same way as one of Fulton’s lovingly-prepared, homemade meals. Yum.

Margaret Fulton: Queen of the Dessert plays at the Bondi Pavilion Theatre until 27th October. For more information and tickets please visit the official website.

The reviewer attended the performance on 12 October.