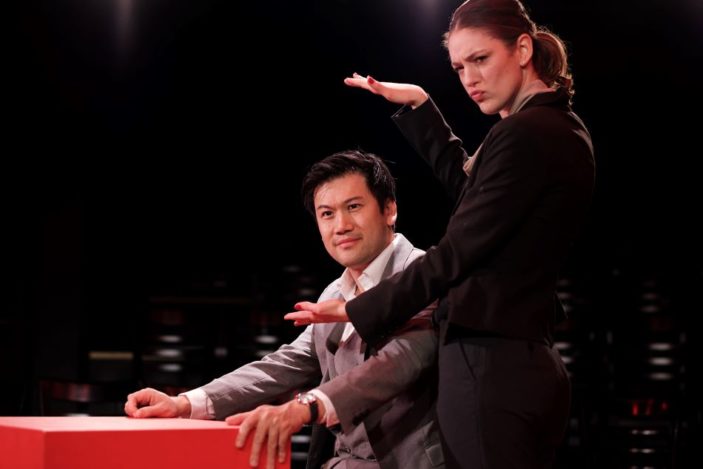 Written by David Henry Hwang, Yellow Face at Kings Cross Theatre is a semi-autobiographical play that features the playwright himself as the protagonist. Set in America over the course of the 1990s, Yellow Face focuses particularly on the inception, creation, release and subsequent failure of Hwang’s 1993 play Face Value, and everything that follows.

When we first meet Hwang (Shan-Ree Tan) he is a celebrated, Tony Award-winning playwright. Upon hearing the news that the upcoming Broadway play Miss Saigon, will star a white, British actor in the starring role (of an Asian man), Hwang writes a public letter of protest against the casting.

The uproar that ensues is told through the media headlines from various publications and, combined with the pressure of trying to write a new play, Hwang starts to consider if perhaps he should have just kept his mouth shut.

Inspired by the controversy surrounding Miss Saigon (the play went ahead with the white actor playing an Asian man), Hwang writes Face Value. With rehearsals just around the corner the playwright thinks he has stumbled across the perfect leading man, there’s only one problem – no one can tell if Marcus G Dhlman (Adam Marks) is Asian.

Hwang manages to convince himself, and Marcus it would seem, that the actor is Eurasian with Jewish ancestry from Siberia. However, once the truth is revealed – that Marcus is Caucasian – Hwang fires him from the play, terrified of the inevitable backlash he’d receive from the press.

Unfortunately for Hwang, Marcus does not fade into oblivion, instead achieving huge success starring in The King and I as the male (Asian) lead. When he eventually confronts him he accuses him of being an “ethnic tourist” and as we see Marcus refusing to be honest about who he is, there is a resemblance to Victor Frankenstein being confronted by the monster of his own creation.

Directed by Tasmin Hossain, Yellow Face steps away from a traditional narrative structure, instead opting to tell much of the story through news headlines and quotes from articles. This is an effective way to move the plot along while providing perspectives outside of the main protagonist. The majority of the cast play multiple characters, to varying degrees of success, in particular Idam Sondhi and Whitney Richards are seamless as they jump into various personas and numerous accents.

Throughout the play, we are treated to the comical and endearing relationship between Hwang and his father Harry (Jonathan Chan). Often frustrated by his father’s blind optimism about America, we are presented with polar opposite views on the country’s acceptance of Chinese immigrants.

While Hwang is sceptical and believes that incidents like the Miss Saigon controversy prove that prejudices still exist, his father laments about the Great American Dream, and bursts into Frank Sinatra’s My Way and talks of how he always wanted to be Jimmy Stewart. He is idealistic and hopeful in a way his son is unable to understand.

Without giving too much away, there is a moment we see this hope snatched away from Harry, and it is absolutely heartbreaking.

While Yellow Face is intensely funny, this doesn’t detract from the commentary it makes on the treatment of the Asian community in America and the interactions which occur between politics and the media. It’s not too much of a stretch to apply this commentary to our own country and when considered as a reflection of our own prejudices, Yellow Face hits far too close to home. The twist at the end is a nice touch and ensures this is a play you’ll be thinking about long after you’ve left the theatre.

Yellow Face runs until 8 May 2021. For more information and to book head to the Kings Cross Theatre website.