Interview: Courtney Meagher from Artrage on how The Rocky Horror Picture Show Immersive Spectacular enhances and celebrates the film 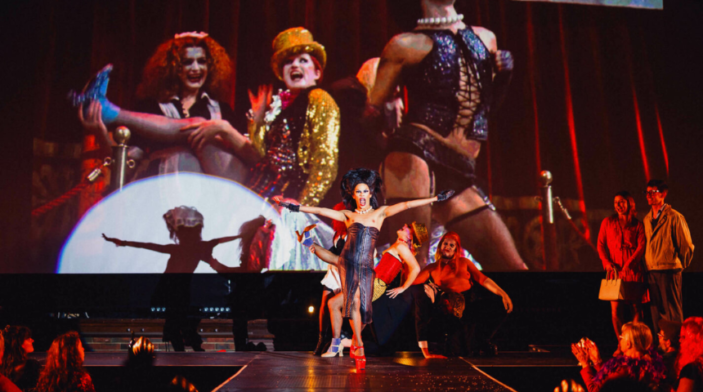 WA arts and cultural organisation, Artrage, is bringing a new version of The Rocky Horror Picture Show experience to the stage, and it begins from the moment you enter the venue. For the Perth shows, you’re greeted by a brightly decorated, retro-style bar that serves drinks with names like ‘Pretty in Pink’ and features rows of sparkling pinball machines. And at the entrance of the theatre, there’s a sign that reads ‘Enter at your own risk!’.

These cheeky references, the crowds of excited fans in fishnets, and twirling spotlights above a screen with the words ‘The Rocky Horror Picture Show Immersive Spectacular’, would be enough to get any Rocky Horror devotee excited. And that’s what the show is all about. Revelling in the weird and wonderful experience that is Rocky Horror, with other people who understand just how special it is.

The phrase ‘immersive spectacular’ is vague and intriguing — perhaps purposefully so, considering the infamous nonsensical quality of Rocky Horror — but Courtney Meagher, Projects Manager at Artrage, says it’s ‘a unique theatrical experience, where we encourage you to get involved with what’s going on. You can expect a screening of the film, alongside a performance. Imagine being in your living room watching the film, but a million times better and a million times more fun.”

Showing at the The Royale Theatre in Northbridge, as well as in multiple regional towns, The Rocky Horror Picture Show Immersive Spectacular draws from the ‘shadow casting’ traditions of the late 1970s, and has people perform the story in unison with the characters on screen. However, unlike the classic shows, which according to Meagher were ‘by the fans for the fans’, Artrage has assembled a troupe of professional WA-based performers to create a polished homage to this history. The cast comes from various disciplines, including circus, burlesque, drag, contemporary dance, and acting — taking the performance to a whole new level. As Meagher said, “Everyone had their own input into how their character was going to be portrayed and how we were going to bring the movie to life. It was a wonderful, creative, collaborative process.” 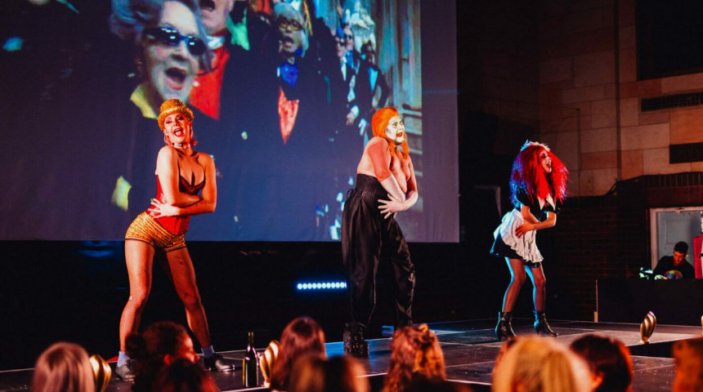 It’s no wonder that a production like The Rocky Horror Picture Show — with its glam rock anthems, extravagant, revealing costumes, and genre-bending storyline — couldn’t be contained to a screen. The fans simply don’t allow it. With Rocky Horror, the more, the better. And this immersive experience is about as over the top as you can get. With performers chasing each other through the aisles, the audience roaring the words to every song, various props flying through the air, and brave audience members joining the cast on stage. “You’re not going in there and taking anything seriously,” says Meagher, “You just shirk that rigidity you have in your life and lean into this absolutely bonkers world that the musical creates.”

The Rocky Horror Picture Show was originally a stage musical, first performed in London in 1973, with the film adaptation released in 1975. Now, nearly fifty years later, the production is not only beloved, but still relevant and modern. Along with the hilarious scenes and catchy music, it’s the progressive, positive themes that make it such an enduring story. As Meagher explains, “It was ahead of its time. And it’s an inherently queer film as well, so it resonates closely with the queer community. I think because it was very much, at its essence, an acceptance of who you are. No matter what you are, no matter how you dress, no matter who you want to be.”

For any fan, the experience of watching Rocky Horror is steeped in nostalgia and memories of what the show has meant for them. Whether that’s a liberating, empowering experience or simply a joyful one. Meagher’s first time watching the film was at home on DVD, she was fourteen, as her Dad had saved the viewing until she was old enough, “I remember sitting there when it finished and going: okay that was awesome, but I don’t know what I just watched.” she recalls, laughing.

But The Rocky Horror Picture Show Immersive Spectacular isn’t just for seasoned viewers. “We’ve had quite a few people say to us that they’ve never seen the film before, but this was probably the best way they could have ever seen the movie.” says Meagher, “Being there with a bunch of people all going on that same journey together, it is a really great way to experience the film.” 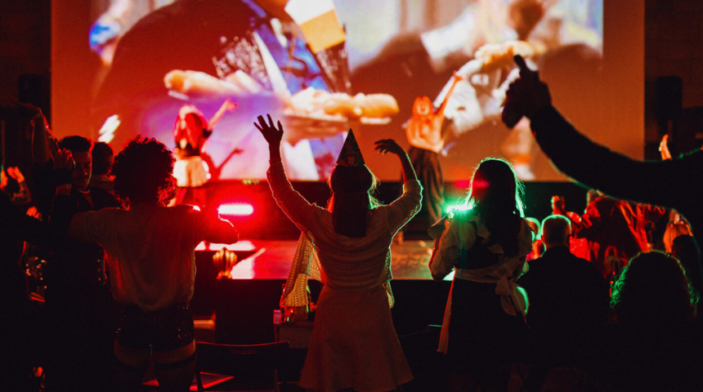 And, truthfully, it’s just a really good time. So go on, give in to the antici…pation!

The Rocky Horror Picture Show Immersive Spectacular is showing at The Royale Theatre until 27 November and then has shows at Kojonup Memorial Hall on 30 November, Manjimup Repertory Club on 1 December, and Margaret River Heart on 2 December. You can find more info HERE.