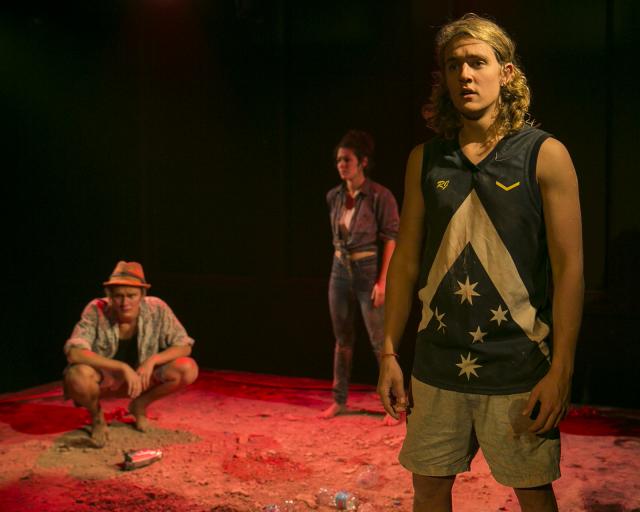 Under this Sun is the debut work from Perth’s latest budding theatre company, The Emergence Co. Directed by Warwick Doddrell, Under This Sun follows the escapades of three young twenty somethings as they, each for their own reasons (some more misguided than others), make their way into the unforgiving landscape of the Australian outback. I went into this production with high hopes, and I’m pleased to say Under This Sun did not disappoint. For their first production together, Emergence Co. really knocked it out of the park, setting the bar pretty high for future productions.

There is a lot to like about this play, from the acting right down to the set design and lighting. Maja Liwszyc, Tristan McInnes and Peter Lane Townsend each put in excellent performances as Grace, Jeremy and Cooper. Though at a push I would say that Townsend really stood out the most for me, playing the just-turned-eighteen Cooper with the right balance of naivety and charming cheekiness. It was hard not to feel sorry for him as his father abandons him as he sleeps, in the middle of nowhere, with nothing but a bottle of whisky.

The story is perhaps not the most complicated or complex out there, nor is it maybe the most original. But Doddrell and his team tell it well, presenting the story cleverly and captivatingly; and I liked the fact that it didn’t strive for a happy ending. Even the set design is reasonably simplistic; it’s definitely a case of less is more, with the cast using the set to great effect, not only capturing the visual barrenness of the outback, but also at times bringing the audience into the dessert, red dust swirling around the studio space, turning the whole thing into much more of an immersive experience.

Finally, I really enjoyed the soundtrack, both the ambient organic soundscapes produced by Mike Podmore, but also the acoustic indie folk of Gareth Stevenson; I felt they added just that little bit of extra emphasis to certain scenes and at times helped moved the play along. It also gave the play somewhat of an Into the Wild Australian Outback edition feel (That’s partly down to Jeremy though too) – which isn’t necessarily a bad thing.
Under This Sun is easily one of the best plays I’ve seen this year, if not my favourite. It’s funny, charming and well presented with great performances from the cast. The production bodes well for the future of Emergence Co. I’m already looking forward to what they come up with next!

—————-
Under This Sun is on at the Blue Room Theatre in Perth, with performances through until the 6th June. For more information and to buy tickets visit: http://blueroom.org.au/events/under-this-sun/

The reviewer attended the Opening Night performance on the 21st May.