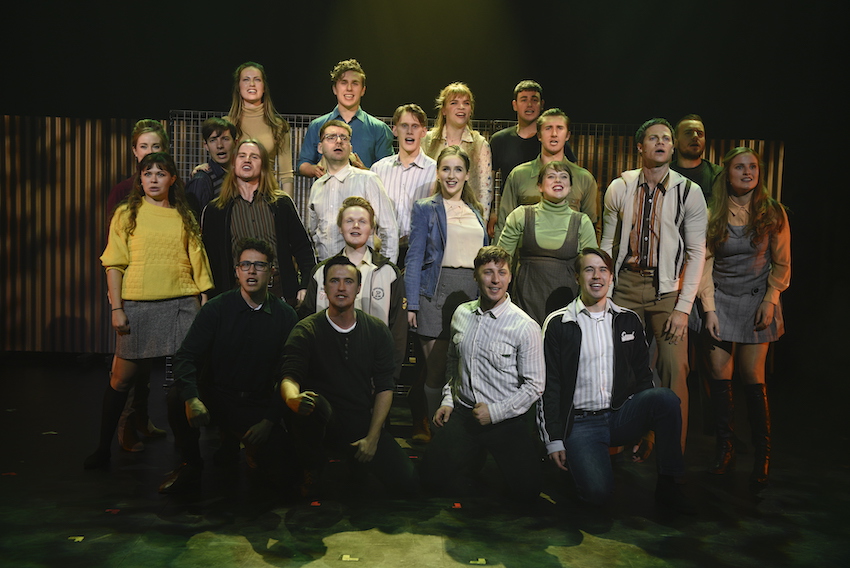 The Beautiful Game is a lesser known award-winning collaboration between the legendary Andrew Lloyd Webber and Ben Elton. On premise, it’s difficult to be excited by a musical based on football (soccer) if you have no interest in the sport, but by the end, you’ll discover that that’s not really what the story is about at all.

Similarly in the way the game of Chess, in the musical of the same name, is just a metaphor of the conflicts between the Americans and the USSR during the Cold War Era; The Beautiful Game is about a group of teenagers growing up during ‘The Troubles’ in Belfast, Northern Ireland in the 1970s.

Like most productions at Chapel Off Chapel, staging is kept to a minimum with only a few movable set pieces used throughout. Lighting by Jason Bovaird creates visual texture, which enhances the storytelling and adds mood where needed. Costumes are used sparingly. These deceptively subtle creative decisions don’t hurt the production, instead allowing focus to be put squarely on the talent of the actors. Based on that alone, makes this Manilla Street Productions musical a winner.

The fact that bringing the premiere production of The Beautiful Game to Melbourne is a passion project for director and producer Karen Jemison is evident throughout. There is enough wit and romance to keep the audience engaged in the complex story.

Jemison’s efforts are backed by an equally driven creative team and talented cast. Having hidden his evident talents in a number of musical theatre supporting roles, Stephen Mahy is perfect as the charismatic leading man. He plays wonderfully opposite his on-stage love interest, played by burgeoning actress Stephanie Wall. Her emotional acapella rendition of ‘If This Is What We’re Fighting For’ is easily the highlight of the show.

I went in to The Beautiful Game under the false pretense the musical was based on sports alone – and I’m not the only one. Ben Elton, himself, has stated the confusion with the title, meant to refer to life and all its possibilities. After mixed reviews, the musical was later rewritten under its sister title, The Boys In The Photograph.

Although not a fault of the production itself, Act I suffers on its heavy reliance of sports to further the story. Creative choreography by Sue-Ellen Shook helps this by merging game play with thematic dance. Act II is better and takes a dramatic, unexpected turn for those unfamiliar with its source material.

Although an Irish story, The Beautiful Game’s themes and sentiments are universal.

The Beautiful Game is a good alternative for those wanting something not overly lavish or theatrical. It’s a thinking kind of musical, and not for those seeking the traditional uplifting escapism to everyday life. You’ll leave the theatre feeling enlightened, changed and maybe a little miserable.

Though a thoroughly enjoyable and thought provoking production, I can’t see its subject matter having the same appeal as other productions currently playing in Melbourne, especially to justify its above-average ticket price (speaking relatively of other musicals on at the same venue). Andrew Lloyd Webber and musical fans alike will enjoy its soundtrack, but it helps having some prior historical knowledge too.

The Beautiful Game is in Melbourne at Chapel Off Chapel through to September 29th.
For more information and to purchase tickets head HERE.

The reviewer attended the performance on 14 September 2019.