History is a complex beast and this is certainly apparent in Madiba. This musical weaves together the late Nelson Mandela’s story and the history of South Africa’s apartheid. The show is ambitious and tries to cover a lot in its two-hour runtime. This is a celebration of the long road to freedom for Mandela and his followers, in the year that what would have been his 100th birthday.

This show has previously played in France. This Australian tour marks the production’s English-language debut. While promoted and billed as a musical, at times this show actually feels like a concert for Mandela. This is because the emphasis seems to be on the music and because the narrative feels a little uneven at times. The often-slight dialogue by the characters – apart from Mandela’s speeches – is not powerful enough. You get the sense that author and composer, Jean-Pierre Hadida is relying on the music – rather than the narrative – to convey the different emotions.

The big drawcards for Madiba are the dance and musical numbers. The music is a combination of traditional African rhythms, rap, hip-hop, reggae, pop/rock and Broadway show tunes. These are rendered in a big and confident way by musicians: Gavin Williams and John Clarke, along with musical director, Michael Tyack. The vocals produced by the company are magnificent and often soar to the high heavens. The dancing fuses together contemporary steps with traditional tribal moves and some eye-catching acrobatics.

This story is framed around a young artist/narrator named Will (David Dennis) who lived through the apartheid era. He has drawn charcoal sketches and raps about the historical context of black and white segregation. The costumes by Sabrina Gomis Vallée are gorgeous and feel authentic to the period. The chequered history is depicted downstage and it gets quite graphic at times.

The set here is quite sparse. A large screen is used for a number of different purposes. It is used to show animations of “Will’s” drawings and in order to convey the passage of time. The screen is also back-lit and used to create the fortress-like prison that Nelson Mandela endured for 27 years. 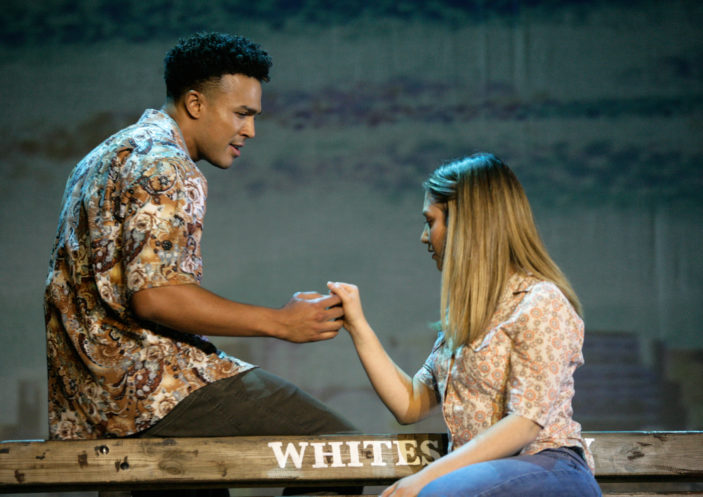 Madiba is Mandela’s clan name and it is used as a term of endearment. It represents his being a father-like figure with an enduring legacy. In the beginning, Mandela was a lawyer who represented black people in court. This opened his eyes up to the injustices committed against his people. It also galvanised him to embark on this crusade. He promoted non-violent methods of protest; but there is more to this story than this musical suggests. This show is a family-friendly and sanitised view of history.

South African native, Perci Moeketsi is excellent as the eponymous character. He has captured Mandela’s mannerisms and speech perfectly. Ruva Ngwenya (Beautiful: the Carole King Musical) is a powerhouse as Winnie, Mandela’s then-wife. The first half of this musical takes in from 1952 to 1982, during part of Mandela’s imprisonment. It is in jail that Mandela meets another activist, Sam (Tim “Timomatic” Omaji) who learns about Mandela’s peaceful approach to the struggle.

The first half of the show is uneven and tackles lots of events including some of the protests, uprisings, massacres and Mandela’s imprisonment. It’s a mixed bag of different emotions and sometimes it drowns under the weight of tackling so much in so many different ways including: various emotions, styles and methods. It could also be that the story was lost in translation by co-adaptors Dylan Hadida and Dennis Watkins.

Act two was far more cohesive and a tighter performance. This one examines the true human impact of the apartheid. We have Helena (Madeline Perrone) and William (Barry Conrad) who have feelings for each other. They would love to be an interracial couple but this is loaded with so much prejudice and history. In Helena’s case, her policeman father, Peter (Blake Erickson) is haunted by a heinous act he committed in the past.

Amidst the tense conflict, Mandela delivers inspiring words from his prison cell, including the Invictus poem. This comes to a rousing climax when Mandela is released. He is elected the first black democratic President of South Africa. This change had ripple effects for the country and the world.

Madiba is an enthusiastic celebration of freedom and the establishment of a rainbow nation. It is obvious from the cast that they are all passionate about the source material, even with its weaknesses. This tragic story of repression is an important and meaningful lesson for the history books. While things aren’t always perfect, Madiba is a bold and human tale that is imperfectly beautiful in its rendering. This musical is like a rainbow-coloured onion, it’s one filled with layers and it depicts a world where change challenges those old black and white views.

The reviewer attended the opening night performance in Sydney on November 1.