Theatre Review: In The Heights had us singing and dancing in the street (Sydney Opera House until 20 January)

They say you should write about what you know. You get the sense that Lin-Manuel Miranda did just that with In The Heights. This musical is the first one that the Hamilton creator ever wrote. It’s also a love letter to his loud and proud Puerto Rican heritage and the colourful people from his neighbourhood, Washington Heights. This borough in New York may be home to people from different Latinx backgrounds, but it confirms that we can all relate to this story.

This show previously played in Melbourne and Sydney at Chapel Off Chapel and Hayes Theatre, respectively. These venues are a lot smaller than the Sydney Opera House and one could argue a tad more suitable for this intimate character study. To compensate for this, the current production added some more hot and sweaty dancers. This certainly helped keep the bodega as the main focus and allowed the cavernous Concert Hall to be a fiesta of delicious sounds and wiggling bodies.

The stakes in this show aren’t particularly high. The idea is that it is a chronicle of a gentrifying neighbourhood over the course of a few days (including the 4th of July celebrations). While this won’t leave you on the edge of your seat in anticipation, it does chronicle different facets of the immigrant experience. It also creates an electric atmosphere because these individuals may have their hopes dashed and other struggles thrown their way, but they can also find time to sing and dance their troubles away.

In another life Miranda probably could have been a police comfit artist or a psychologist. He has an enviable ability to sketch out a character through a sharp line of rap here or some witty repartee there. This means the audience feel like they really get to know the character. It also helps create that intimate, fly-on-the-wall look at this tight neighbourhood and community. 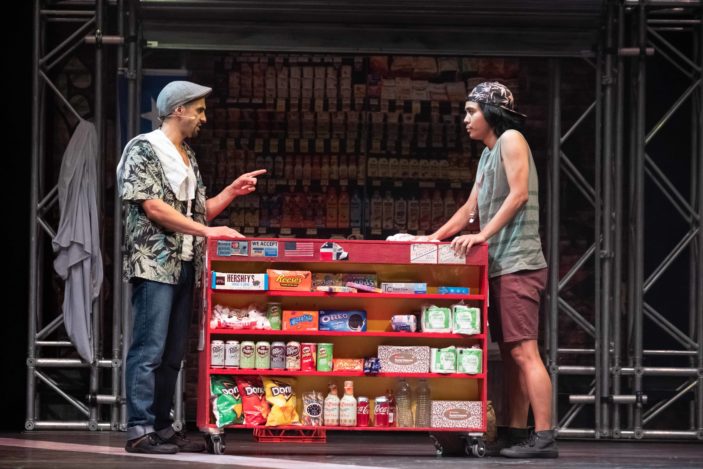 Stephen Lopez stars as Usnavi, a warm and kind-hearted bodega owner named after a boat. His shop sells coffee and modern conveniences with a side order of gossip. He is often the glue in this neighbourhood. Lopez certainly puts on a charismatic performance as an everyman kind of figure. Another important person is Abuela Claudia (Margi De Ferranti) who is the resident grandmother. She immigrated to the US from Cuba a long time ago and now takes younger charges under her wings.

Luisa Scrofani plays the good girl, Nina. She has returned home with her tail between her legs. She is also romantically pursued by Benny (Hi-5’s Joe Kalou), much to the chagrin of her over-bearing parents (Ana Maria and Alexander Palacio). Oliva Vasquez meanwhile, plays a hairdresser and delivers some powerhouse vocals. Marty Alix had some great comedic acting chops as Sonny. All of their lives will be impacted by a winning lottery ticket.

This show is a diverse one. This means that not everything will appeal to everyone, but at the very least there is a little something to be had by all. The music ranges from big, bombastic Latin beats to straight-up salsa, some heart-wrenching soul and carefully-constructed hip-hop. The numbers are so vibrant and full-sounding, you’ll be surprised to know that a nine-piece band is responsible for it all.

In The Heights is not your standard theatre fare. But it’s great that director Luke Joslin and company have created something that keeps with Miranda’s vision. It was Miranda who ultimately took a different road and made something very pleasing and enjoyable.

The dancing is absolutely stunning thanks to choreographer Amy Campbell. Some eye-catching acrobatics feature alongside taut grooves and moves. It is fast. It is furious. You won’t want it to stop.

Miranda spent his formative years in Washington Heights and now he gets to celebrate it. The result is a vital and colourful ode to friendships, adopted cultures and more. You wish someone like Messer Trump would take note. And fast. In The Heights proves we need to hear many more stories like this one. May there be less walls, more bridges and in the former’s place, some wonderful dancing and music. Just like a trip in and around the Heights.

In The Heights plays the Sydney Opera House until 20 January as part of Sydney Festival. For more information and tickets please visit: https://www.sydneyoperahouse.com/events/whats-on/musical-theatre/2019/in-the-heights.html.