On March 25th, 2010, our recently roving reporter Laurachel Ventus headed to St James Theatre on Broadway (NYC), where Green Day is currently staging their American Idiot musical. It sounds both ridiculous and genius at the same time, so naturally, we were curious as to what it was all about. Thankfully, Laurachel was kind enough to provide us with a review of the proceedings …

I have never been to a Broadway musical but on this extremely cold spring day in New York I learnt that weather doesn’t stop people from attending. 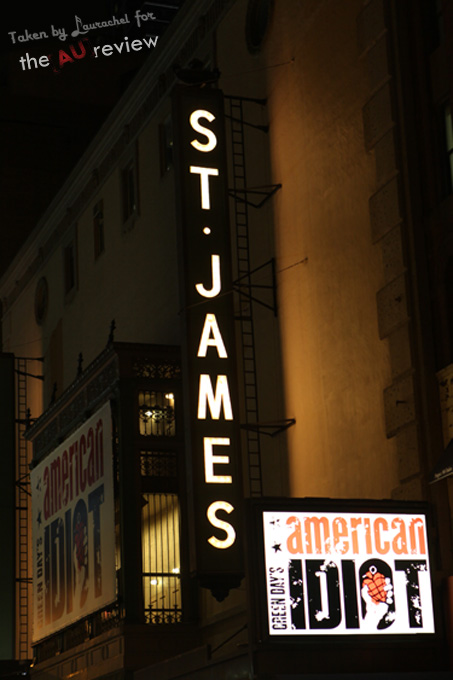 American Idiot is a story of three friends that try to break out of boring suburbia and make something of themselves – their life soundtrack using the songs from Green Day’s Grammy award-winning album. First performed at Berkley College, its popularity has moved the musical to a higher status. Tonight is the first night of previews at St. James Theatre in New York City, situated between 8th street and Broadway. When I went to pick up tickets at 5pm there was already a die-hard Green Day fan at the front. Despite set-seating, I guess you can’t stop concert habits.

As we enter the building, the red walls are covered with adoration messages from fans, encouraged by chalk left on the sill. The foyer was packed with people looking at merchandise but I’m surprised they didn’t have the disc on sale (post show research note: they are looking to have a cast recording release). My one piece of memorabilia? My first ever playbill from a punk rock band!

Even before the show begins, I am blinded by flashing lights even after numerous warnings about no photography in the theatre. Then I spot him… Sitting dead centre is the back of a messy haired lead singer. That’s right, Billie Joe had managed to sneak past me without knowing. Boy, all this travelling must really have me knackered – but as they say, on with the show.

While a smaller arrangement to what I pictured Broadway stages to be, the props and set are planned out well. Staircases were used by cast and placed for musicians, even hiding that big instrument we know as the cello. Poster-covered walls turned into windowsills and back to walls with ease. Musicians were dressed appropriately in punk rock attire and the cast made their songs their own, so much so that I caught Billie Joe nodding and singing along.

In adapting American Idiot, the play was given a determined path, and as a result some lines seemed to exist with the sole purpose of slotting in a song. However, since the album is so well received, the songs are too, no matter the entry point. As I hadn’t listened to the record in a while, it was great to hear the strings prominent in a live performance. Due to its high popularity, it is hard to pinpoint favourites, although you can tell what was given the most attention. The male lead Johnny (played by John Gallagher Jr.) began teasing us with the guitar lick of “When September Ends” but instead sings a love song to his female counterpart Whatsername (played by Rebecca Naomi Jones).

The one thing that was surprising though was the on-stage sex. No actual nudity, but I don’t recall when obtaining my ticket there being an age restriction. When the scene began, I thought of the little kids I saw in the line. So a warning to the parents out there – it’s not necessarily a family outing.

As I wasn’t in the balcony, I couldn’t tell if it was a full house or not, but if it was anything like my floor seat, then I’m guessing they also gave a standing ovation at the end. One 21 guns, lay down your arms give up the fight – if this show makes it here I do suggest you go see it.