Sydney Festival Review: Werk It will have you asking, “How’d they do THAT?” 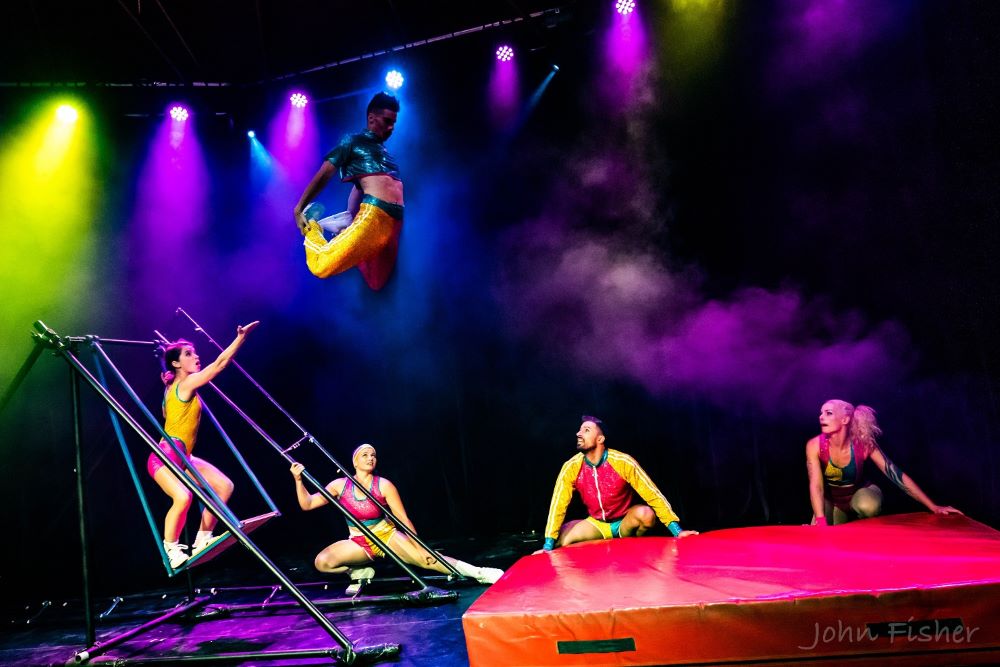 Sitting in the audience at Werk It you’d be forgiven for rubbing your eyes and questioning what you’d imbibed prior. The 60-minute show performed by Circus Trick Tease was pretty much all killer, no filler. This was a crazy array of jaw-dropping stunts and circus artistry with lashings of sass and innuendo.

As you walk into the York Theatre you are greeted with some tubthumping beats from the 90s with Daft Punk’s “Harder, Better, Faster, Stronger” proving a shape of things to come. The setting was some neon signage that seemed more Eighties-themed, but the end product was certainly more Aerobics Oz Style on steroids than “Let’s Get Physical (RIP Olivia Newton-John).

Circus Trick Tease is made up of five incredible performers who dazzle the audience with both solo spotlight pieces and group choreography that’s as tight as their spandex outfits. The troupe’s founder, Malia Walsh balances on a beer barrel above the audience when she’s not making us laugh. This feat was impressive enough in and of itself, but she was also doing so in a pair of heels that were so high I’d actually struggle to walk in them, never mind anything else!

The award-wining Vincent Van Berkel does more backflips in this show than a filibustering politician. How he manages to do one of these while navigating a kettle ball and a Solo can left me mightily perplexed. You’ll never look at soft drink in the same way again after both this and the “Vogue” routine where the cast wore conical bras fashioned out of Coke bottles. Yes, you read that right.

Richard Sullivan manages to balance on his head while swinging on a trapeze. And if that’s not enough he also returns to juggle at one point with so much speed I defy you to count the balls nevermind contemplate catching them. Some people like to pick on jugglers, but you couldn’t possibly win if you pick on this dexterous fella.

Lisa Lottie is the undisputed queen of hula hoops. She balanced one above her head while also managing a striptease. And if that wasn’t enough – like Sullivan – she hulla-ed that many hops it was hypnotic and impossible to quantify.

Strong woman Cassia Jamieson is an absolute badass. She managed to lift Walsh and Van Berkel above her head. This human pyramid would have made my chiropractor cry but Jamieson didn’t even break a sweat (ha ha). Oh and then she manipulated and balanced a table with her feet, giving a whole new meaning to “Under the table”.

There was barely a moment to pause during the show as the pieces quickly morphed from one energetic 90s track to the next. Perhaps the only softer moment was the skipping routine. Sure, it was done at breakneck speed by incredibly fit people, but it didn’t seem fit to hold a candle to all those other dazzling wares on display.

Werk It pushed the boundaries of exercise up to 11 and somehow managed to find and deliver more. The show was so colourful, from the array of spandex and Mardi Gras-inspired outfits to the performers both mesmerizing us and making us laugh. There was so much packed into this, it was a veritable showcase of strength, balance, precision, and agility.

They say you can run away and join the circus but these guys proved they do that for breakfast, along with 10,000 squats, twerks, burpees and more. These guys are so fit and work so capably that us mere mortals can only cry in comparison.

Werk It plays at the Seymour Centre until January 22. For more information and tickets head HERE.