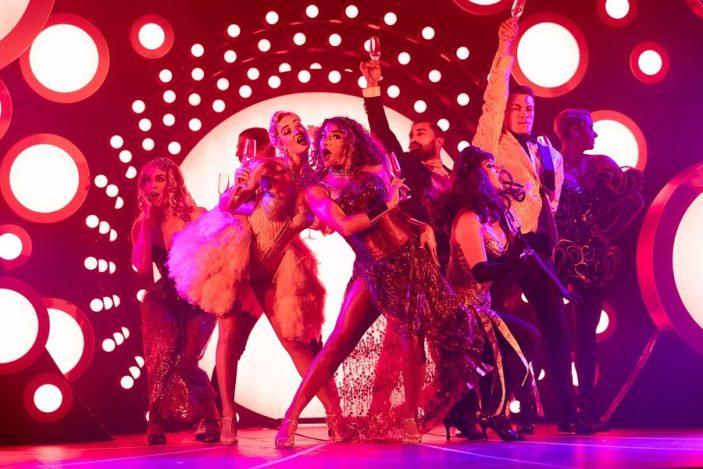 Many Sydneysiders are already familiar with Blanc de Blanc. Strut N Fret’s incredibly flirtatious, Champagne-fueled stab at high-class cabaret has played around the city for years, popping up every so often at different views including a sell-out season at Sydney Opera House.

Now, it’s back. And quite honestly, we should all be so glad that this high-flying French-themed production is as raunchy and adult as ever, shaped into new venue The Grand Electric (formerly The Giant Dwarf Studio) on Cleveland Street in Redfern. The venue – raw, open and charmingly minimal with a vibrant front courtyard (necessary during the 20 minute intermission) – is as much the star of the show as the performers themselves.

The last time I saw Blanc de Blanc was at Sydney Opera House’s The Studio a few years ago. And it’s remained one of the most infectiously playful and enjoyable cabaret shows I’ve seen to date. And yet, the relative largeness of The Studio can swallow such a production.

At The Grand Electric, Blanc de Blanc feels more grounded and in-your-face, which adds so greatly to the raunchiness that characterises this iteration of Strunt N Fret’s production.

Key to this, of course, is the cast of performers, which includes genuinely funny hosts Felix Pouliot and Remi Martin, who guide the show with tastefully drawn-out jokes about male genitalia and flirt with the crowd, some of whom are invited on stage to participate in some hilariously uncomfortable bits.

Many of these performers are veterans of the scene and have proven themselves reliable, creative and professional. Some you may already know from Cirque du Soleil, while others will introduce you to some raw talent. Put them all together and the chemistry is palpable.

From pillow fights to a standout show of acrobatics, performed while trying to cover up all the nude bits – sometimes failing – with towels. There’s absolutely no shortage of variety and entertainment to keep you satisfied throughout the run of Blanc de Blanc Encore.

I daresay, it’s the best version yet.

For more information check out the official Facebook Page.