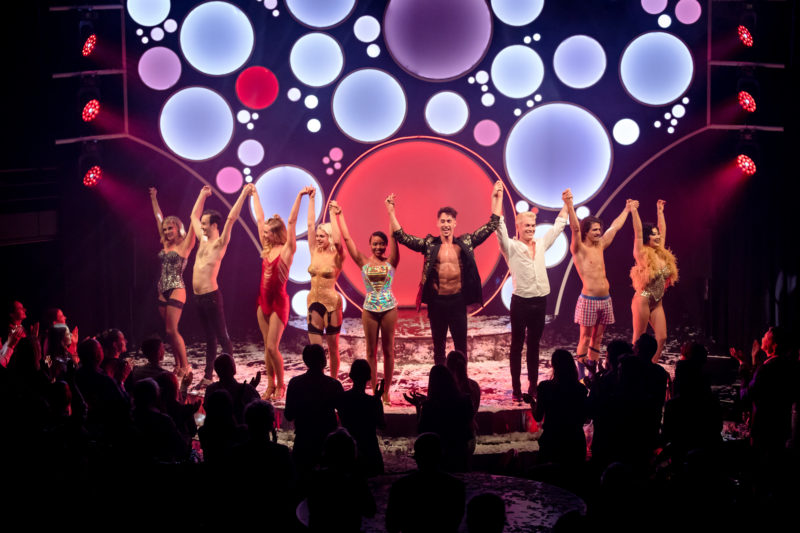 Production house Strut & Fret are now welcomed regulars around the Sydney Opera House, enjoying a strong reputation thanks to exciting past productions like Blanc de Blanc and Limbo Unhinged. It’s almost a given now that the masterminds behind these finessed circus cabaret shows will be back each year with another exhilarating project, and for 2019 that is Blanc De Blanc Encore.

With Limbo Unhinged, Strut & Fret reworked and reimagined their highly awarded Limbo, which has been a thrilling hit all over Australia thanks to its risqué frame and effervescent performers. It worked out very well for them; Limbo Unhinged went on to enjoy plenty of acclaim and drew sold-out crowds down to the Sydney Opera House’s The Studio throughout its season. They’ve done a similar thing here, reshaping their bubbly French Champagne themed production Blanc de Blanc, which first premiered in 2016, into a bigger, bolder rush of perky dance numbers split amongst cheeky pop references, acrobatics, ariels and stunts, widening the dynamic with new performers individually renowned for their respective talents.

If there was any difference when compared to their previous productions, it is that Strut & Fret have done even more damage to whatever rule book they may have read in the past, knowingly smashing conventions and showing that the genre of alt-cabaret still has plenty of room to subvert audience expectations. It may not be as grungy and tough as Limbo, replacing seductive fire breathers with scintillating choreography, but there’s still that charming ability to transgress the very idea of what cabaret should be.

Bubbles obviously play a big part in the show, from the circular shapes standing over the corner stage to a segment which has the room submerged in a fantastical sea of bubbles as one member of the talented cast, Aerialist Caitlin Tomson-Moylan, flies over the crowd on a pole with a bottle of Champagne, generously filling any empty glasses.

Masters of Ceremony Spencer Novich and Remi Martin Lenz are impeccable as a duo, juxtaposing Remi’s comparatively mature demeaner (with the exception of one musical segment I detail below) with that of Spencer, who (“unaware”, as the act goes) climbs over the crowd with his testicles hanging out of his zipper, while promising that this will be a tame and completely family-friendly show.

An even bigger juxtaposition is the elegance found in the dazzling costumes and graceful acrobatic routines aggressively shaded with crass physical humour; even some frat-inspired numbers, which include what is easily the longest beer bong you will ever see in your life. A further example is found in this: at one minute vocalist and show-stealer Ashley Stroud is strutting around the space with a sassy rendition of Ertha Kitt’s “Champagne Taste”, while the next Martin Lenz is standing on the stage completely naked, claiming he has invented a new musical instrument before getting his penis out (obscured from the audience by a flag) and slapping it from leg to leg while beatboxing to create an infectious rhythm. The constant change in tone is hilarious, but those hoping for stronger connective tissue than just bubbly and flirty entertainment should reassess their expectations.

As with Strut & Fret’s other hits, there’s no doubt that Blanc de Blanc Encore will enjoy another satisfying run at Sydney Opera House, especially given the wealth of talent and genuine imagination that helps distinguish this spectacular production as something that’s much more immersive and participatory (Want a contortionist lap dance? It may be your lucky night) than before. If that’s the evolution of Strut & Fret’s shows, then I’m all for it.