It is as magnificent, jaw-dropping, gasp-enticing and lavish a staging as you can imagine, but Opera Australia’s decision to rely on digital technology for its latest production of Aida nearly came unstuck on opening night, due to a tiny, blinking square of blue light.

Using soaring, rotating LED panels as the primary set, onto which superb video visuals are projected, Davide Livermore’s digital opera was always going to be a risk for the company, both in terms of its technical application as well as the traditional audience’s attitude to the ‘revolutionary’ approach. Whether the risk will be worth it remains to be seen, with an entire month’s worth of performances to come, but those attending opening night on Wednesday 18th July experienced both the good and the bad of the new-world approach.

A little over one hour into the performance, in which we’d been treated to giant writhing serpents, billowing, ominous storm clouds and statuesque, golden, semi-nude warriors, one of the panels experienced a glitch. It was small, true – and by this point we’d seen just how amazing an effect could be created by the visionary staging – but there was no hiding the fact that something had gone wrong. As Amneris stalked her rival Aida, determined to make her reveal her true feelings for Radames, a monstrous black panther – Amneris’ familiar – prowled behind the pair. And then, disaster. A bright blue blinking square, probably no bigger than an A3 piece of paper, appeared on the panther’s head. One LED panel had decided not to play ball. 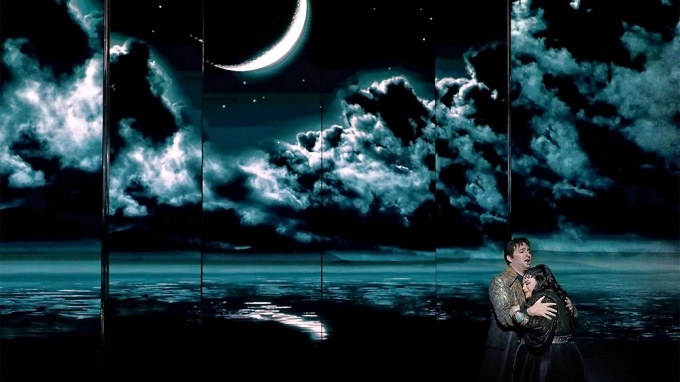 The show, of course, went on, and as the panels rotated and the images morphed from panther to dusty canyon to golden hieroglyphs, the audience tried really hard not to be distracted by the tiny discolouration. Interval was looming and they would surely have the problem fixed for the third and fourth acts, right?

Not quite. The glitch reappeared in the midnight sky as Aida pined for her homeland. Thankfully, subsequent rotations meant the LED error was no longer visible to those seated centrally and we were able to enjoy the rest of the extraordinary production distraction-free.

And that really is the thing to take away from this show: it is extraordinary. The videos, created by D-Wok, are atmospheric, breathtaking and worthy of any modern art gallery. The costumes, designed by Gianluca Falaschi, are intricate, sumptuous and oh, so beautiful. The headdresses alone are worthy of a ticket. In fact, despite the limited set, the production looks every bit as opulent as you would expect from a design that draws on Egyptian antiquities and the Art Deco movement for its references. 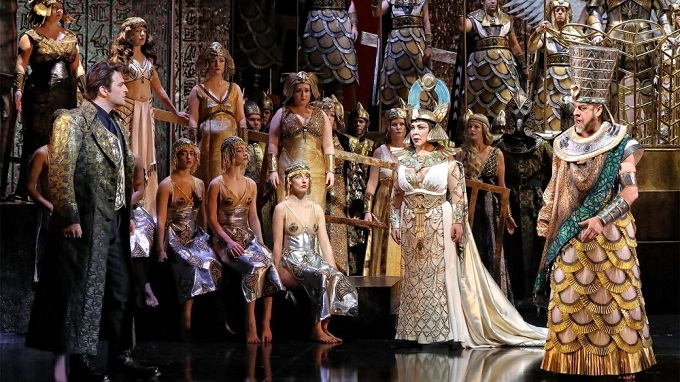 Then there’s the sublime soprano of Amber Wagner. From her very first notes, it is clear this is a woman who has command of her voice and is not afraid to bring the passion forth. She soars expertly over the Chorus of Victory, as the Egyptians call for their prisoners’ execution, while in contrast, in her duets with Radames (Ricardo Massi) and Amonasro (Warwick Fyfe) she is well-balanced and emotive. In fact, the latter duet is a true musical highlight of this production (in which a high bar is already set).

Massi’s tenor is clean and potent, although his acting is a little stilted at times. As Amneris, Elena Gabouri’s vocals were a little restrained to start, but she rose to the challenge of the emotional confrontation with Radames in the final act. 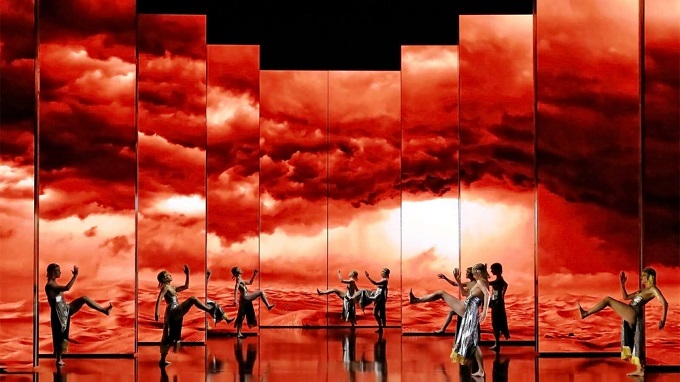 Chorus Master, Anthony Hunt, answers the extreme dynamic challenges thrown at him by Livermore and conductor Andrea Battistoni, achieving some truly unbelievable moments of softness. The male chorus, in particular, are wonderfully nuanced considering their size. The ballerinas, too, are a highlight, expertly choreographed and committing wonderfully to the roles of possessed priestesses.

The orchestra, under Battistoni’s baton, starts very strong and also manages to achieve wonderful moments of volume. The famed March is given extra oomph with six extra trumpeters appearing unexpectedly in the balcony. It is a nice touch, although it would have been even better had they been facing the audience, rather than the stage.

Directorially, Livermore manages to deliver the grand scale expected of Verdi’s Egyptian epic. Was the effect impacted by the technical issue? A little, but it’s honestly hard not to recommend buying a seat to experience this spectacle for yourself.