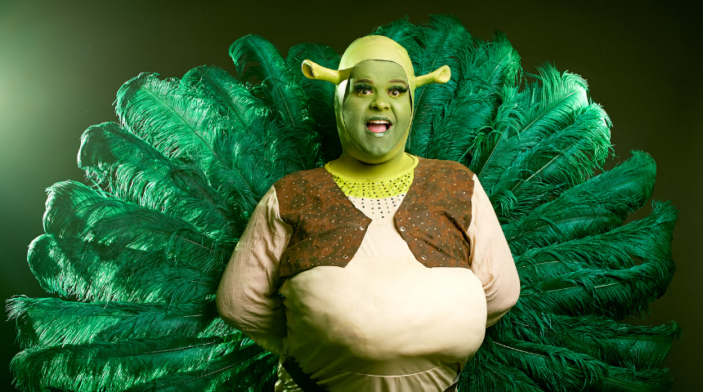 You might know him from America’s Got Talent, but burlesque performer Trigger Happy has added another string to his already well-strung bow in the form of Shreklesque. Yep, you read that correctly. Shreklesque.

Blending burlesque, drag, and everyone’s favourite orgre, Shreklesque has been entertaining sold out audiences since its first outing at Perth Fringe last year.

His goal? To wow audiences, push boundaries and show that every body is a burlesque body!

With upcoming dates at Brisbane’s Tivoli and Sydney’s Enmore Theatre selling fast, it’s an exciting time for Trigger, as creator, director and leading ogre. We were lucky enough to grab five minutes with him to talk all things Shreklesque – but first, in true burlesque style, let us tease you a little with the show’s trailer…

Well, Trigger, I guess the most obvious question is: Shrek plus burlesque??? How does that work? Where did the idea come from?

Shreklesque was born out of pure luck and coincidence actually. When I was first starting out in burlesque around 4 years ago, I was asked to be apart of a Nerdlesque show (Nerdlesque is a sub-genre of burlesque where all the acts are inspired by pop culture), and the first character I thought of was Shrek.

After a few drinks I had my first outline of what I wanted the act to be – fan dancing to “Hallelujah”, high intensity jazz to “I Need a Hero”, and of course any Shrek act wouldn’t be complete without tassel twirling to “I’m a Believer”.

Shreklesque quickly became my most booked act, and it’s taken me around the world, I’ve performed it at the Vienna Boylesque Festival, New York Nerdlesque Festival and the New Zealand Burlesque Festival just to name a few!

Fast forward 3 years and I’m thinking about what show I wanted to create for Fringe World 2020 and just thought “F#*^ it, I’m going to do a burlesque show full of Shrek characters!“

I put a call-out on Facebook and had some incredible drag and burlesque performers from around Australia wanting to be involved and from there the first iteration of the show was created!

Could you tell us a little about the show’s journey? What’s it like to go from those early days at Perth Fringe to be able to tease seasons Australia wide on the website?

The early days of Shreklesque were definitely interesting, trying to organise a show with performers from around Australia without really knowing how the show would work was challenging to say the least.

I knew what type of show I wanted to create and I brought other performers onboard who would suit the style of show but I really let them run free with creating their own acts – including all the costuming, props, music.

When the first season of shows at Perth Fringe World was announced I had a sinking feeling – Is this going to work? Will it sell well? What have I done? Then something completely unexpected happened, we sold out our entire season before we had even opened the show and before the cast even got to meet each other in person.

I still remember the day the cast all met each-other for the first time, it was the day before our opening night and our first (read: only) rehearsal, I sat them all down in the 90-seat comedy lounge with 3 lights and one back door entry and said “Well, we’ve sold out so lets make sure we put on a good show!”

The first season had mixed reviews – a lot of people loved it, others said it lacked refinement, wasn’t cohesive and the costuming needed work. So I took all of their feedback on board and started planning the second iteration of the show.

We invested in professionally made costumes, we added more characters, extended the show from 43 minutes to 100 minutes, we workshopped new/existing acts to make them bigger and better, and had a 3 month rehearsal period.

Since our re-debut, we have done 5 sold out shows in Brisbane and the inaugural Wynnum Fringe! Now we are preparing for our biggest tour yet – we’ve released our Tivoli season here in Brisbane and recently announced our Sydney show at the iconic Enmore Theatre! There are a few other shows currently in discussion but we do have dates in Melbourne and Perth almost finalised which is really exciting!

From a 90-seat comedy lounge to a 1600 seat theatre in less than 12 months and during a pandemic is pretty crazy to think about but I’m so excited that we are getting to share this show with audiences around Australia!

The response to the Brisbane shows in particular has been kinda incredible – the first one sold out super quickly, and the other shows are following suit. What’s it been like to see that kind of reaction?

To be completely honest it’s pretty overwhelming. I was speaking to the cast prior to The Tivoli announcement, kinda suggesting that this will probably be our last show and we are going out with a bang! I had always dreamed of bringing my own show to The Tivoli so I thought why not do it as our last Shreklesque show. I signed the contract, paid the deposit and thought to myself I’ve either just lost a lot of money or this is going to be successful and it was definitely the latter!

Our first show at The Tivoli sold out within 20 minutes of it going on general sale, our second show sold out in a week, and our third and final Tivoli show is over 75% sold out!

Have you had any negative pushback to the show?

Thankfully there hasn’t really been any negativity towards the show. Each time someone mentions something or reviews the show it’s always been constructive and I can see how it would improve the show!

I completely self-produce this show myself so I don’t have anyone to report to (unless you count my Mum haha)!

Tell us about the cast you’ve assembled. There’s some incredible rep for drag and burlesque community there!

THE CAST! I could talk about each and every one of them all day, they are the core, the backbone of the show and I’m so happy to work with such a professional group of performers who bring my vision to life every time they step on stage!

When I was casting the show I really wanted to showcase as many performance styles as possible and also wanted to celebrate the diversity of the LGBTIQA+ community. The cast consists of burlesque/boylesque performers, drag artists and musical theatre performers all bringing their own unique styles which I think creates a really dynamic show!

The cast are really a family, we have our fights and disagreements but we all love each other dearly and I couldn’t think of a better group to work with every week!

As people working in the arts, COVID showing up couldn’t have been easy for anyone involved in the show. What was its impact – on both the show and yourself?

Miss Rona really threw us for a few loops this past 12 months, we’ve had venues cancel on us, borders close and performers stuck out-of-state and unable to make it to performances.

We had a fully sold out 6 night run at Perth Fringe World in February that we had to cancel due to COVID which was really upsetting. That where we debuted Shreklesque originally, and we wanted to bring it back to them to show them how much the show had changed and how much we had worked on it.

For myself as a solo artist I had almost an entire year of booking cancelled, I had multiple international tours cancelled, I was supposed to perform in Europe, UK, America, Canada and New Zealand last year but it all came crashing down basically overnight.

But COVID wasn’t all that bad, it gave us time to refine Shreklesque, to get the costumes made, to rehearse the show, without COVID Shreklesque wouldn’t be where it is today, I wouldn’t be doing this, I probably wouldn’t even be in Australia. Shreklesque is one good thing to come out of COVID and I’m so happy it has!

Obviously Shreklesque’s May dates are a big focus right now, but what else is on the calendar for you? Any other projects you’ve got lined up?

I’m currently working with a few venues in Australia to secure more Shreklesque dates so we can take this show to as many audiences as we can!

I’m also thinking about what comes next, this brain never stops thinking and I definitely have a few ideas ready to go!

Shreklesque‘s Brisbane dates are almost sold out, but you can still grab tickets for the May 6th date HERE.
If you’re Sydney based, you can catch Shreklesque at the Enmore Theatre on June 11th – tickets HERE.
For other major cities, keep an eye on the tours page HERE. There’s plenty to come!