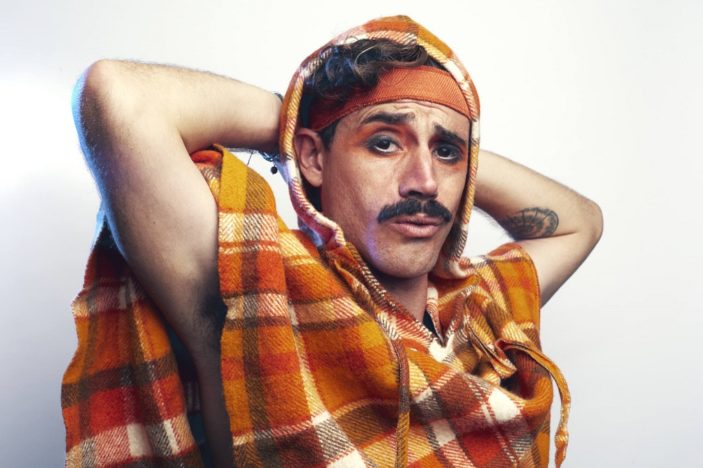 The self-proclaimed love child of Salvador Dali and the Mighty Boosh, Australian comedian Dani Cabs has created a larger-than-life alter ego in Poncho Orange, a Latino-lovin’ buffoon, liquifying the English language so that you can slurp its runny honey, gooey goodness down into your internals and be transported into his world of play, love, and… self help?

Fresh off his comedy tour in Melbourne, Dani spoke with Peter Gray ahead of his Brisbane Comedy Festival run with his latest show, Keep It Up!, discussing the origins of Poncho Orange, where his love of comedy stemmed from, and how toxic masculinity unexpectedly fuels his cheeky stage show.

Where did the idea for Poncho Orange originate from?

It just came from over the years of being frustrated at the lack of empathy and intuition I keep seeing from guys, especially towards woman.  It just happens everywhere.  In a bigger sense, you look at all the stuff that happened within the Liberal Party and those rape allegations, and how nothing has been spoken of since.  That just exemplifies as a nation how much we care about moving forward with our masculinity.  That’s really poor.  And I kind of developed this anger towards that, and as a white middle-aged man I just thought “Enough! Let’s make changes.”

It always seems like comedy is one of the best ways to express how you’re feeling without that worry of receiving backlash.  People can be really truthful in comedy and frame it as “I’m only making a joke”, but we all know they’re not.

Yeah, you hide the messages behind humour.  If people walk away from the jokes you’re making, then maybe there’s something to be spoken about outside of the theatre.  Comedy is definitely the best way to communicate those ideas.  And then you’re not lecturing.  No one likes that.

Has comedy always been an outlet for you?

For me, I’ve always been a clown.  Always the class clown, the joker…always playful.  Even if it’s the check-out at a supermarket, I’m waiting to see what I can say to make (the cashier) giggle.  I want to bring down those boundaries, so humour has always been in my life.  As for writing stories and putting it out there for an audience, I’ve only been doing that since 2015 on stage, and maybe 2013 on camera.  It hasn’t been that long a time in the scheme of things.

Was there a catalyst that prompted you to finally take on comedy in a professional capacity?

Oh, for sure.  Where I grew up it was quite toxic, and there’s some of this in the show, I grew up in a really rough area in the South Western suburbs of Sydney.  I’ve always had to hide the flamboyance and the colour.  It took me quite a few years to acknowledge the trauma that that caused me.  I guess, coming into my 30’s I was doing an honour’s degree in photographic art and I was always putting myself in the shots.  So it became a study of myself and I took the time to reflect on who I was and why I was behaving certain ways in certain environments.  I was recording myself, audio and video, and I was playing it back to see who I was.  That made me realise I had to address these insecurities around shining.  I didn’t want it to be like “Oh yeah, I’m a peacock.  I shine!”, because I still have a lot of insecurities around that, but it was in analysing myself and receiving feedback from my advisors that they loved watching me that stirred.

From what I’ve seen of the show from photos and brief video snippets there’s a bit of half-nakedness going on.  Is there an aspect of facing fear and just letting yourself go with such material?

Yeah, definitely.  It’s about stripping back any kind of barrier.  It’s saying “This is who I am” and just being present.  I’ve got nothing to hide, so let’s go on a journey. 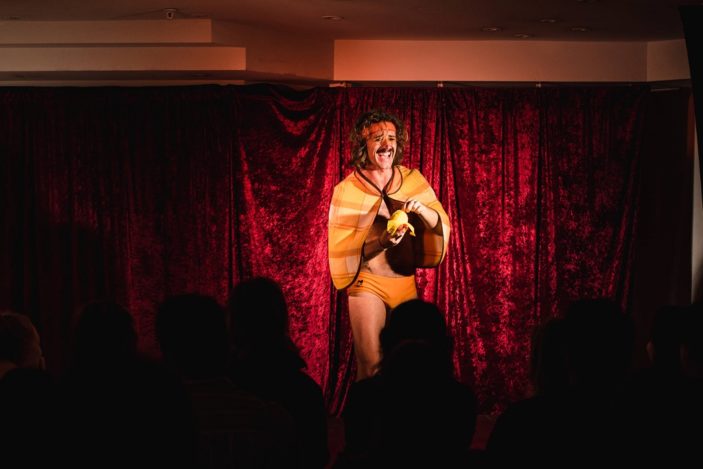 I feel like the best comedy derives from those that are void of vanity.  Are there any comics that you aspire to in any way?

I used to watch Fawlty Towers and Mr. Bean growing up, so, for me, it was the real physical clown essence that I really liked.  In terms of comedians? I guess I watched the classics in the 80’s and 90’s, like Eddie Murphy and Richard Pryor, but I think my inspiration came much later in life.  There’s clowns that I really look up to from the UK and the US, and why I like them is because there’s no barrier or ego to what they bring to the stage.  You annihilate the ego to a pulp and you’re left with honesty, and with that honesty you can 100% connect with the audience.  Instead of just being on stage thinking you have all the answers, you go on a journey with them.

Where did Poncho as a character originate from?

I’ve always played that Latino character.  On my website there’s a tab that asks “Who is Dani Cabs?”, and one (option) is The Artist, one is The Teacher and one is The Performer.  The Performer is this Latino.  I didn’t really have a set name for him, he was just a generic Latino, kind of didn’t really know where he was from, and I was coming off a 16-hour day at Blues Fest (working in video production) with a couple of mates, and it was a cold, windy day and I had no warm clothes, and my friend gave me her orange shawl.  I was carrying on performing, having a laugh, I had my leg up “seducing” my friend, being an absolute buffoon.  My friend actually came up with (it), calling me Poncho Orange because of the coloured shawl, and I thought “That sounds so ridiculous it could be the name of a character”, and since then it stuck.

As you mentioned before about toxic masculinity, it feels like this show is coming out at such an opportune time.  Was that topic and how relevant it is now more a coincidence? Or did you add more into the show due to its topicality?

I don’t think I added.  It was just always in me because I suffered from it.  I’m not saying I’m a victim or that I’m the only person who suffered from it, but it was just the (right) time to talk about it.  The #MeToo movement, which, I guess, started this wave of talking about toxic masculinity allowed a conversation.  There’s a lot of guilt surrounding (that movement).  As a man trying to do good, I feel guilty in just being a white middle-aged man.  It’s time for us to make changes and own up to the mistakes we’ve made, but if we’re vulnerable then we can help this movement and make change.  Until (cisgendered men) jump on board in a positive way and admit (our faults) with our heads held high, it won’t change.  I don’t think I purposely amplified it to fit in the show, but I felt support around the conversations that it was time to voice my opinion.

You can see Poncho Orange: Keep It Up! at Brisbane Powerhouse as part of Brisbane Comedy Festival, running 10th-15th May, 2022.  Tickets are available now at BrisbaneComedyFestival.com