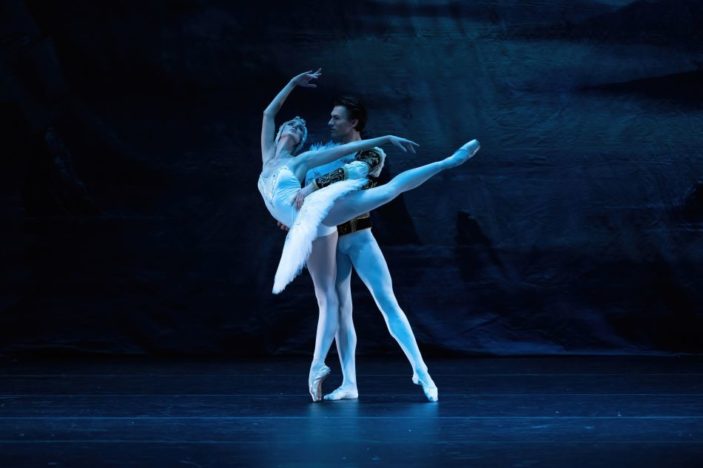 Prepare to witness one of the world’s most beloved ballets, Swan Lake, as performed by the immensely talented United Ukrainian Ballet, which only formed less than six months ago. From the brilliant mind of Pyotr Ilyich Tchaikovsky, reimagined by Elena Glurjidze and assisted by Sara Knight, this captivating production tells a classical tale of good triumphing over evil, one that has left audiences awestruck for over a century.

Split into three acts and four scenes, the story of Swan Lake takes audiences on a magical journey around a royal palace, draped in beauty and marred by the presence of an evil sorcerer. The young Prince Siegfried (Oleksii Kniazkov) is drawn to the exquisite beauty of a princess-turned-swan (Kateryna Chebykina), but all is not as it seems when Baron von Rothbart (Oleksiy Grishun) enacts a dastardly plan.

From the very first scene, the stage is set for an exquisite performance. The curtain rises to a terrace garden setting, with the entire company lighting up the stage with vibrant costumes and great choreography. The first act is one heavy on story, and it’s all told in a clear and easy-to-understand manner, one that still puts the dancing at the forefront. With so much going on across the stage, I found my eyes darting left and right to keep up with key narrative elements and more subtle mimes. It can be a little chaotic at times with a lot happening simultaneously, but at the same time, there’s beauty in that. It’s a strong start to a production that only gets better with each rise of the curtain.

Opening to a gorgeous and atmospheric lakeside, the second scene of act one is absolutely spectacular. Without a doubt the best scene of the production, it’s packed full of spellbinding solo dance numbers and a brilliant ensemble performance by the corps de ballet. As the swans grace the stage, it’s like watching an extended synchronised swimming routine where all of the 20-or-so dancers are in perfect sync. This is also where Kateryna Chebykina makes her debut as Princess Odette with successive solo and group numbers that left the audience awestruck. Her poise and finesse radiates through the theatre as she glides effortlessly across the stage. 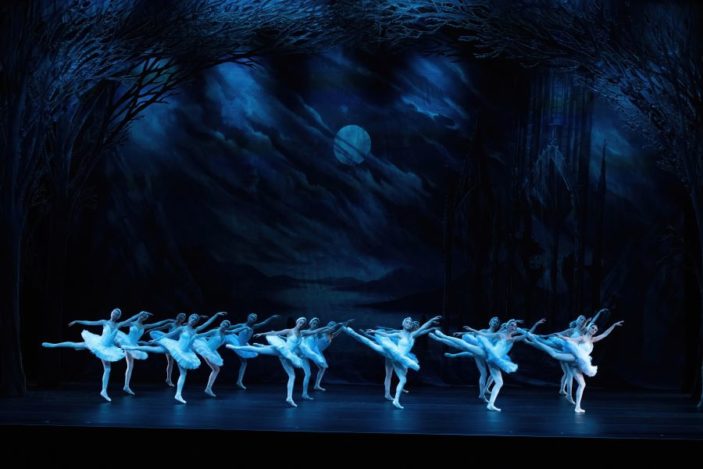 Opulent is an understatement when it comes to the staging, costuming and set design of the second act. The curtain rises to thunderous applause as the luxurious setting of the Royal Palace ballroom is unveiled. This entire scene is a rollercoaster of remarkable solo dance numbers and intriguing storytelling twists, headlined once again by both Karyna Chebykina and Oleksii Kniazkov, who combine for an even more stunning showing. Finally, the third act is a culmination of dance, love and spectacle that puts a cap on a fantastic production.

As a whole, the choreography is mesmerising, with plenty of emotion both energetic and sombre expressed incredibly well through dance. Whether it be the more charismatic style of Oleksii Kniazkov or the gracefulness of Karyna Chebykina, there’s beauty radiating from every scene. The choreography is one thing, but the backdrop of Tchaikovsky’s iconic composition is a character in its own right. As the music dips and swells through scenes, it’s a beautiful accompaniment to the dancing. I feel the music could have benefited from being a live orchestral performance as opposed to a recorded one, however it’s not a huge burden on the production’s quality.

I want to highlight one performance in particular – that of Pavlo Zurnadzhi, who plays the Jester appearing in both the first and second acts. Not only is his dancing exquisite, but there’s a comedic touch to his performance that no one else has. It makes his character a little more unique on that front, drawing plenty of love from the audience.

The United Ukrainian Ballet’s production of Swan Lake is made more impressive by the fact that this company of talented dancers have produced a unified performance after forming under six months ago. Fantastic dance performances across the board make this rendition of Swan Lake one to see. The second and third scenes make more of a lasting impression than both the first and fourth, but it’s all tied together by Tchaikovsky’s iconic score. Charming, exquisite and magical, this is a must-see for casual and avid ballet fans alike.

Swan Lake is playing in Sydney from October 28th to November 5th, and in Adelaide from November 9th to 13th. For more information and to purchase tickets, head HERE.