Returning to Australia fresh off the back of his lead role in the Atomic Saloon Show at The Venetian in Las Vegas, Damien Warren-Smith’s latest show sees him transform into an overzealous idiot attempting to perform all of Greek Mythology in less than 60 minutes in order to save his Hellenic homeland from economic ruin. The show – Garry Starr: Greece Lightning – just took out the top prize at Adelaide Fringe (BankSA Pick of The Fringe) and is highly anticipated going into the Brisbane Comedy Festival.

Ahead of his debut at the festival, Damien spoke with Peter Gray about his comedic origins, how he created such a ridiculous character as Garry Starr, and his true feelings about the atmosphere of performing in Las Vegas.

I’m predominantly in film, and I like going into films knowing as little as possible.  Watching the trailer reel for your show evoked a similar feeling in that it doesn’t give too much away.  Before getting to the show itself, where did comedy and performing start for you?

Ooh, that’s a good question. I was always a performer.  I had an older brother – I was the youngest of two – and he was really good at sport, (so) I always wanted to be really good at sport.  It was inevitable that I wasn’t going to be as good as him.  I liked putting on costumes (laughs), wearing the soccer jersey…the social aspect of it.  I played sport all my life but I drifted into performing arts around high school, and that’s when I really came into my own.  From there I went to drama school and got into performing.  I was an actor for 10 years-or-so before I discovered Clown, which is basically the style of performance I relate to now.  There was no turning back from there.  And speaking someone else’s words on stage was such a joyous experience.

Do you find writing your own material an easy process? Did you think it would be something you’d be good at?  Or was there time in fine-tuning it?

Oh, I was terrified of it, but I think that’s why I chased it.  I found this whole new side of performance I felt incompetent and terrified of, so, as I discovered this trait of mine, I followed that path.  As far as writing goes, I kind of write in retrospect.  I create the show and I have these type-cards on the wall that’ll say what will happen in each scene, and I’ll get up and play them at an open-mic night or a cabaret night.  Then I go back and write (down) what I’ve said and tweak it a bit.  So then I pitch together a script on what works and what doesn’t.  That was very early on, mind you.  Now, I’m a bit better at writing knowing what people think will work.

So, in some ways it’s almost a dress rehearsal in front of an audience as their reaction changes your material?

Yeah. I had the bare bones of this new show and I booked in a week of previews at The Butterfly Club in Melbourne in December last year, and essentially that is my rehearsal.  I have time during the day to work and then I perform to an audience and I respond to what they see me doing.  I re-work it for the next day and perform again that night.  It’s forever evolving throughout that first week.  And, really, the first 50 performances (the show) is changing and growing.

Yeah, so the first solo show I created, back in 2018, Garry Starr Performs Everything, which was kind of a little bit of a hit for me.  The guy that directed (that show) was a very well known comedy director from Britain, and he quite liked what I was doing.  He loved the show so he was happy to put his name on it.  One of his next projects was that he was commissioned to create a show in Vegas, and he suggested me.

Is there a certain sense that once you’ve conquered Vegas the fear in anything more has dissipated?

I think (Vegas) sounds much better.  It looks great on paper, on my CV, but the reality is that they’re pretty easy to please as audiences because they’re off their heads (laughs).  They’re just wasted!  You see people in the front row who aren’t just really drunk, but enormous pupils.  I didn’t find Vegas a particularly nice place to live (either), so when the show re-opened I said I didn’t want to go back.  Some people think it’s the pinnacle of a career, I think it’s where art goes to die. 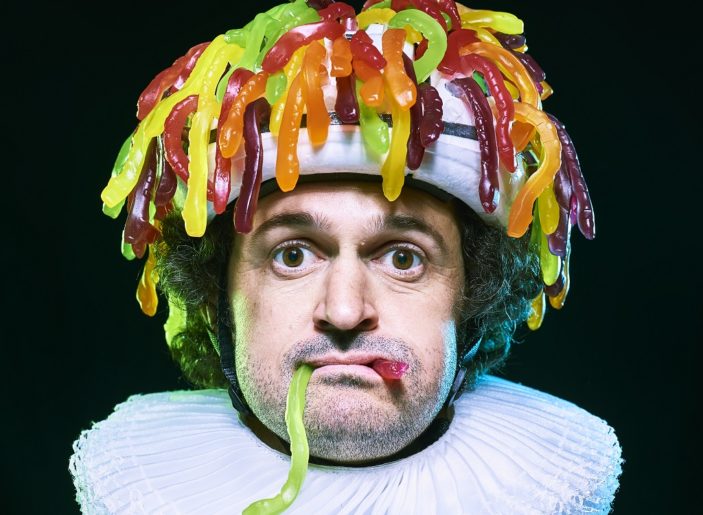 When you were forming the Garry Starr character, did you take inspiration from anyone?

Garry Starr is kind of my clown, in that he is the one thing that’s ridiculous about me, the thing I’m embarrassed about.  It’s like when people say something about you behind your back, and if you can find out what that is and open that wound up on stage, people will love you for it.  That’s kind of how it came about for me.

And the show itself, what’s the general narrative? Without giving too much away…

The general idea is that Garry has discovered his Greek heritage.  And then he discovers the economy isn’t doing well in his homeland, so he thinks “What if I help boost tourism by performing all of Greek mythology in an hour?  Surely, everyone will want to go Greece!” (laughs).  This is the type of high stakes, low intelligence of this character.  It’s this impossible task and this utter arrogance of this character who thinks he can do everything.

It feels topical in the sense that art has been one of the major areas that has suffered through COVID, and then tourism as well.  Someone saying they’re going to save tourism in one show has a lot more relevance to it now…

It’s funny, on some subconscious level I must’ve thought…I just wanted to make people laugh, I wasn’t aiming for a profound element (laughs).

With your writing, do you feel comfortable in writing a show for other people to perform?  Or will you always include yourself in whatever you do?

I’m becoming much more open to that idea.  No one else can do Garry Starr, obviously, but I’m something now aimed at kids and that includes other actors.  It’s equally as ridiculous, and hopefully I can be in that one and direct it (too).  I’m excited to do that a bit more.  I’m excited because I’m coming into the theatre world in a way that a lot of people don’t come into it.

And on the subject of including other people, there’s a lot of audience interaction in this show…

Oh yes.  I would describe what I do as playing with the audience.  This new show I hand out props at the beginning, and they don’t know when or how they will be used.  As soon as people realise that I am the butt of every joke, no one is ever made to look more stupid than me.  I don’t prescribe to what I want people to do, I just give them the prop and they think “Oh wow, I think this is the moment I need it!”

Are you ever worried about what someone is going to do?

Yeah, that was so much of a learning curve.  You learn very quickly the parameters in which people are going to respond.  It’s not so much that you’re frightened they’re going to get it wrong, it’s more disappointment if they try to be funny and do more than what’s absolutely needed.  You can feel it.

You can see Garry Starr: Greece Lightning at Brisbane Powerhouse as part of Brisbane Comedy Festival, running 10th-15th May, 2022.  Tickets are available now at BrisbaneComedyFestival.com