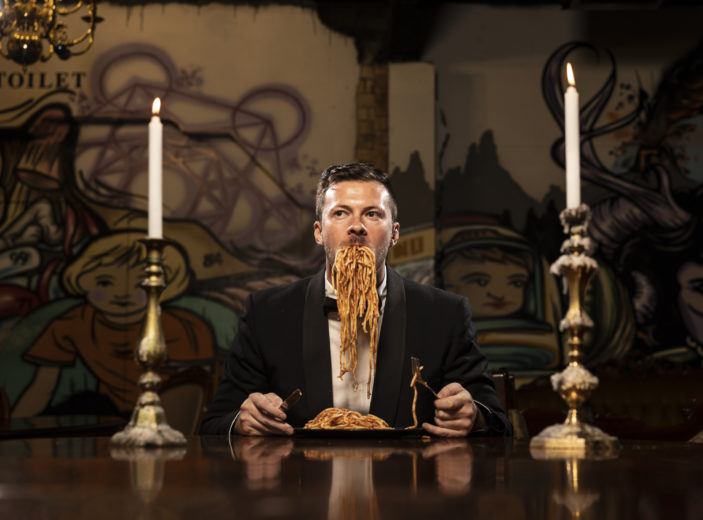 Coffs Harbour comedian Ben Stevenson is coping with grief in the best way that he knows how: through comedy. Using his wit as an outlet for the emotions surrounding the loss of his mother, Stevenson created Ratbag – a stand-up routine combining the darkest point in his life with uplifting stories from his childhood.

The three-time Raw Comedy state finalist, 2020/21 winner of Best Comedy at the Australia Radio Awards and winner of the Golden Croc for Best Comedy at Darwin Fringe is no stranger to success for his quirky views on life. Ratbag – a nickname given to him by his mum – provided Stevenson an opportunity to find meaning and consider alternate perspectives on the situation.

“This is an incredibly personal show, and the one I am most proud of,” Stevenson explains. “One of my favourite parts about comedy is the ability to make fun of the things that hold power over us. Taking such a dark and heavy point in my life and turning it into something so light and fun is my greatest achievement to date.”

The Ratbag tour – a whopping 19 dates – will include performances at FRINGE WORLD Perth, Adelaide Fringe and Melbourne International Comedy Festival. Starting with three shows at The Shoe Bar & Café in Perth on 2 February (Stevenson’s debut appearance in WA), the tour will then head to Laugh Lounge in Adelaide from 22-25 February before 12 shows straight at The Belfry Fitzroy in Melbourne from 29 March to 9 April.

In support of the tour, Stevenson has shared his top five tips for planning a funeral.

“Planning a funeral is never an ‘exciting’ event. They require almost the same amount of planning as a wedding, and… I’m going to admit, not anywhere near as much fun. They cost a lot, and most of the time they have to be planned at short notice while you’re coming to grips with losing someone. Any way you can find to make it easier, I say go for it. I’ve assembled some handy tips below.”

Someone close to you has just died. This is their last hurrah, so you can be forgiven for wanting to pull out all the stops. My advice is to keep your coffin choice to something on the first page of their brochure. It’ll be seen for 45 minutes max, and then put in the ground forever. Or if you opt for cremation, put straight into a furnace (never did get a reply asking for those brass handles back). Page five might have the ‘Rolls Royce of Burial Caskets’, but you aren’t burying the ‘Rolls Royce of People’, are you? Flick back to the generic 4-door sedan section. Your wallet will thank you, and the recipient is unlikely to complain any time soon.

My partner’s family lost their Granddad recently. At the request of his wife, the turnaround for the funeral was very quick, but as a result the funeral company’s main hearse was already taken, so the back-up was used. After a very lovely service and a heart wrenching goodbye as we all watched Peter, the patriarch of four generations, be loaded into the back of the hearse, things got incredibly awkward as the driver tried starting the engine several times with no luck. After the fifth attempt we were ready for Peter to come back to life and punch a hole through the coffin screaming “Have you checked the bloody spark plugs!”

As an experienced comedian, I was able to draw a lot of parallels between a funeral and an open mic night (at least at a funeral the person on stage had the decency to die before they got there, not during). What I’m saying is, be choosy with your line-up. It’s easy to get sentimental and let everyone share something, but before you know it the service is cutting into valuable drinking time at the wake. Blood relations only as a bare minimum. Your uncle gets a Guernsey, but your cousin? They’re clearly making a last ditch run at any potential inheritance. You always thought of her as ‘kind’? How original. Dreaming if you think that’s getting a run. Lift your game, or save it for the after party.

This isn’t so much a tip for the funeral you’re planning, but the one that will be planned for you someday. Let your family know your last wishes. It helps to write it down, but even a conversation will do. It will go a long way to easing their decision-making when deciding between cremation/burial/shooting you out of a cannon. If you want to donate your organs, actually register. If there could ever possibly be an upside to never seeing my mum again, it’s that someone else gets a second chance at life because they received her liver (no warranty included, of course).

You’ve most likely heard of the wedding tax (the sudden increase in cost when it’s revealed the service you are booking is part of a wedding). But have you heard of the funeral discount? It exists and it’s entirely dependent on how far you’re willing to go. Obviously, the sympathy card won’t work at the funeral home with grief being their bread and butter. But practice saying ‘It’s for a funeral’ solemnly in the mirror so you don’t giggle come showtime and you’ll be surprised what deals can be sent your way. Airlines, hotels, venues for a wake. Feel free to give it a crack at the supermarket checkout in a month’s time. Some would say that’s unfair, but as you’ve just learnt, nothing in life is.

The Ratbag tour kicks off at The Shoe Bar & Café in Perth on 2 February. You can get your tickets HERE.