Circus Review: The Dumtectives in Cirque Noir is a dazzling blend of acrobatics, slapstick and adult comedy 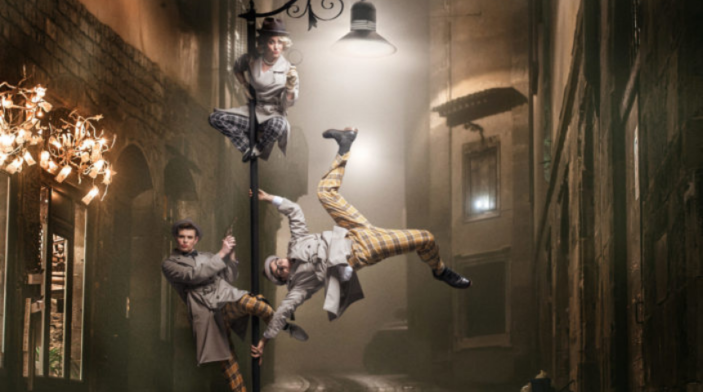 A perfectly stupendous amount of ‘Dum’!

The critically acclaimed and globally touring Australian circus company, Dummies Corp, lights up the stage at The Famous Spiegeltent in Melbourne with their first adult-themed circus comedy – The Dumtectives in Cirque Noir.

As part of the Melbourne International Comedy Festival, this show blasts you into a world of murderous humour and mystery with a captivating blend of acrobatics, innuendos and slapstick comedy.

Set in the unique style of a cirque noir, this production makes the absolute most of its theming – it’s all about the guns, cigarettes, and detective trench coats! The narrative cleverly ties each of the individual acts together, sending the Dumtectives on a journey to uncover the mystery behind a high-flying murder.

Amy Nightingale-Olsen, Thomas McDonald and Leigh Rhodes make up the comedically gifted trio who lead this entire production. The three of them work very well together as a tight-knit unit and bring out all the fun, laughs and electric energy that spreads through the crowd! Not only are their acrobatic skills wonderful to watch, their comedic prowess and ability to execute slapstick comedy with hardly a spoken word is hilariously effective. They each bring something unique to the narrative as they hone in on the traits of their respective characters and put it all on show through their over-the-top, animated performances.

Admittedly, it does take a few minutes to really ease into the style of humour that’s at play – but once it takes off, it never stops. Beyond the opening sequence, the main characters and goals are quickly and efficiently introduced, and despite all the antics, it never loses sight of the story it’s telling. At times it’s very easy to forget that there’s a narrative at play, but that’s only due to the acrobatic wonders being so transfixing.

What makes this production stand out above the rest is the immense variety of impressive acrobatics and comedic set-pieces spread throughout. It’s like three shows in one, and, impressively, it never beats the same drum twice! The production keeps you on your toes and ensures you never know what’s lurking right around the corner. If you think you know what to expect, guess again!

That said, one short mini performance at about three quarters of the way through – while certainly a neat display of talent – does feel a little out of place in the grand scheme of things. Saying it’s the oddest part of the show feels odd in itself as the entire show is full of overly silly moments, but this one just didn’t hit the same.

The acrobatic possibilities are limited by the available space, but that doesn’t make them any less fun to watch. What these performers can do is amazing, including one of the best and most impressive juggling acts I’ve seen. At times, there were more things flying through the air than you could possibly keep track of!

The small pockets of adult humour are the icing on the cake – these little R-rated moments make everything seem so much more refreshing. Cleverly adding a burst of shock and surprise, they’re certainly the moments that got the biggest laughs out of the audience.

The intimate setting really works for this style of circus comedy, allowing the audience to see everything happening across the entire stage, and ensuring every small background detail can be noticed. Though it condenses the space, limiting the ability to go wild with acrobatic tricks, it also drives creativity in how they maximise said space and use props for multiple purposes.

The Dumtectives in Cirque Noir is a creative triumph, blending slapstick comedy with daring acrobatics and a dash of raunchy adult humour. It dares to be different, and that, ultimately, is what enables all of its achievements. For fans of circus acrobatics, slapstick comedy and the art of film noir, this adult-themed circus comedy makes for a thoroughly entertaining night out!

The Dumtectives in Cirque Noir is at The Famous Spiegeltent through to April 18th as part of the Melbourne International Comedy Festival. For more information and to purchase tickets, head HERE.