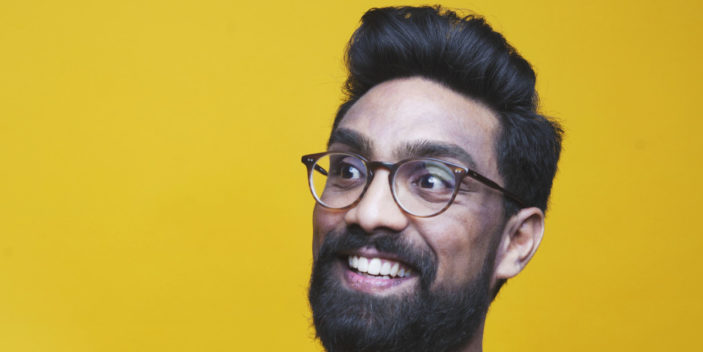 The Rhino Room is considered Adelaide’s premier venue for comedy. The 2022 Fringe program is huge and this year they’re hosting over 50 performers with 16 shows per night, five nights a week. With this incredible choice, it can be difficult for some performers to break through the noise and find an audience. It was this dilemma facing Suren Jayemanne in the tiny downstairs Hell’s Kitchen at the Rhino Room on Thursday night. Facing a sparse crowd, he mused on why previous audiences hadn’t recommended him via word of mouth, the best form of promotion.  Bravely, he marched on.

Opening with a video montage of his two departed dogs was probably one of the more unusual opening sequences to a comedy act. Suren is Sri Lankan born and explained how he left a successful accounting job to pursue comedy some eight years ago. His formula for success at accounting consisted of three elements: dark skin, nerdy glasses and an open spreadsheet. One wonders that he could have perhaps kept the façade of working for several years to support his comedy career.

Suren’s easy, friendly, likeable image was occasionally shattered; a mock threat to the tech girl entering the room, the mock threatening of the audience with his microphone stand, his misuse of the hall pass arrangement with his partner.

The title of Suren’s show is Industry Darling Adjacent, perhaps too many long, confusing words for his target audience. Stories about his failed Masterchef audition, his long-term partner’s desire to prove her pure Englishness via DNA testing, his ice-addicted dog he obtained from Nowra (the drug capital of NSW apparently) and his disdain for the concept of a “Farmer of Colour Wants a Wife” all seemed aimed at middle white Australia.

During a bout of audience participation, he asked this reviewer what his favourite thing to cook was. The answer blurted out was, “steak.” Wrong answer. What could have been funny observations on different cultural eating habits, really went nowhere. His style is quite disjointed and vague. Perhaps deliberate?

The laughs flowed more freely during the second half of the show as he seemed to relax more. Some jokes were perhaps too clever and fell flat. In a larger audience, a delayed realisation of the punchline by the audience can work quite well. With a smaller number, often he was already onto the next story.

Fringe can be a difficult time for performers that miss the mainstream attention. The material would have worked better to a full house. Genuine moments of humour and warmth were overshadowed by his obvious disappointment. Let’s hope that word of mouth does spread to give Suren a better reception next Fringe.

The reviewer attended the performance on Thursday 24th Feb