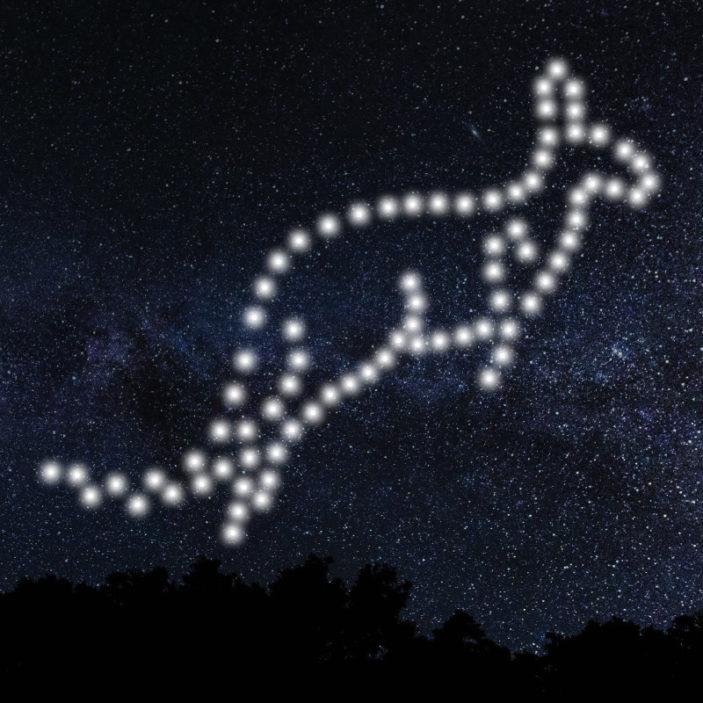 Song Lines are the way of sharing knowledge along generations of Indigenous people. In this multimedia performance, the relationship to the land is explored, not just in song, but in visual poetry.

Originally planned for the Wayville Showgrounds, the venue was changed to Leaconfield Winery, due mainly because of the number of drones in the sky. In a way, this created a more inclusive experience, with the backdrop of the Willunga hills a perfect cocoon for the show. Even a full moon peeping out above the hills added to the experience.

Whilst families filed into the Leaconfield space, set up blankets and chairs and organised their picnic dinners, Indigenous Adelaide singer Nathan May entertained with his soulful songs of peace and hope. The mood was anticipatory as young and old settled in for the evening.

As the sun set, three transparent screens lit up with balls of light, representing fire, the lifeblood of Australia. It represents warmth, protection and danger and is an essential part of our lives. Jack Buckskin narrated a “Welcome to Country”, with the song “I Belong” written and performed by Nancy Bates and Tom West. Archie Roach narrates each chapter and introduces each story. The drones are programmed to fly above the screens and create three-dimensional images which complement the images on the screens at ground level.

Chapter three focussed on Stolen Generations and Apologies. Music included “Took the Children Away” by Archie Roach and “From Little Things (Big Things Grow)” by Kev Carmody and Paul Kelly. A poem entitled “Unearth” was read by Ali Cobby Eckermann.

The theme for chapter four was based on the APY Lands land rights movement. The drones formed constellations while the song “Kulilya” was performed by the Iwiri Choir singers. The singers were also filmed and animated by the drones.

The final chapter was performed by Electric Fields, “Ngura Ngayuku”. The themes included Rainbow Serpent, reconciliation and the Pitjantjatjara Language.

Sky Song is a bold and important performance telling universal stories in a multimedia format. It would be great to see an extended version of the performance, as it felt like it was over all too soon. A bold and immense narration of the First People stories.

The reviewer attended the performance on March 19

Sky Song has been extended due to popular demand.