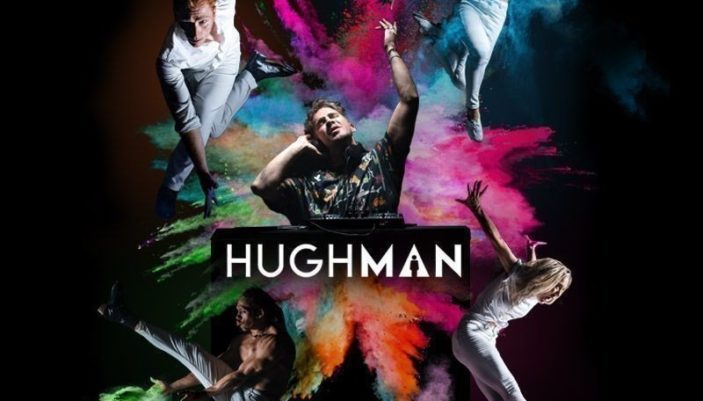 The open-air MOA mini stadium at the rear of Gluttony was literally packed to the rafters. A dedicated crowd of followers of Hugh Sheridan were there to watch him strut his stuff in HUGHMAN. Bursting onstage, Sheridan soon spotted a Crows-guernsey-wearing man and pulled him on stage. Surprise. He’s one of the plethora of dancers who boogied that night to the driving soundtrack.

Sheridan was seemingly everywhere, behind the decks, out front, mingling with the dancers. His energy is infectious. It didn’t take long for the front few rows to stand up and start to move. Before long the whole stadium is following suit.

Despite some microphone issues, the music and the dancers kept coming and kept the crowd moving on a cool autumn night. The show was marketed as being specifically designed to “lift the collective vibration of everyone in the audience through, music, dance and visual ecstasy”. This is exactly what HUGHMAN achieved. There was a genuine lift in the energy of the assembled crowd.

HUGHMAN is a feelgood show that is sorely needed in the post-pandemic world. People are ready to love, dance and feel human again. And this show plays its part in that.

The reviewer attended the performance on March 12th.