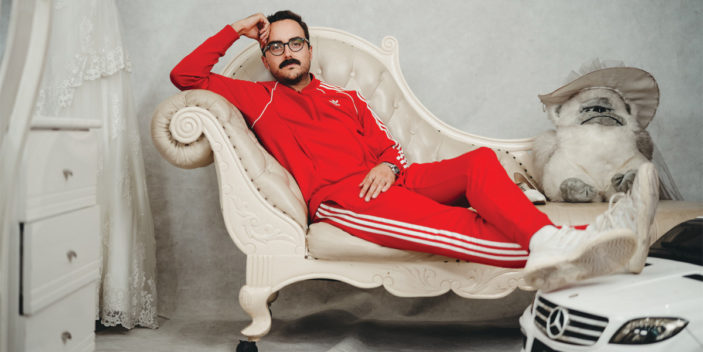 Daniel Muggleton is an Australian stand-up comedian wearing a tracksuit. His trademark comedy is poking holes at bogans, racism, and almost anything else he can think of. He has a regular podcast and is a comedy club regular.

On this chilly Tuesday night in the open-air Piglet Theatre at Gluttony, he wasn’t fazed by the small turnout compared to the larger weekend crowds. In fact, he appreciated the effort that this audience had gone to, and gave it all.

Not all the jokes were politically correct, and some were a little cringe-worthy, but they were delivered with the grace and charm that only a man with thick-rimmed glasses, an oversized moustache and a red Adidas tracksuit could get away with. Stories of his wife and himself trying to conceive a child are hilarious.

Plenty of audience interaction kept the pace alive, a fair wack of self-deprecating humour kept it all real and not even hecklers from the back fence could faze him. There was a fair amount of pointed observation from this mild-mannered tracksuit-wearing comedian.

It takes a certain ability to be able to tell jokes and stories for an hour, standing in an open shipping container addressing a cold seated audience, but that’s what he does. Don’t forget the merch stall after the show, selling bootleg copies of his past shows and surgical masks printed with his face. Needs to be seen to be believed.

Daniel Muggleton may be white, he maybe wrong but he’s definitely mostly white. It’s okay though, you can laugh.