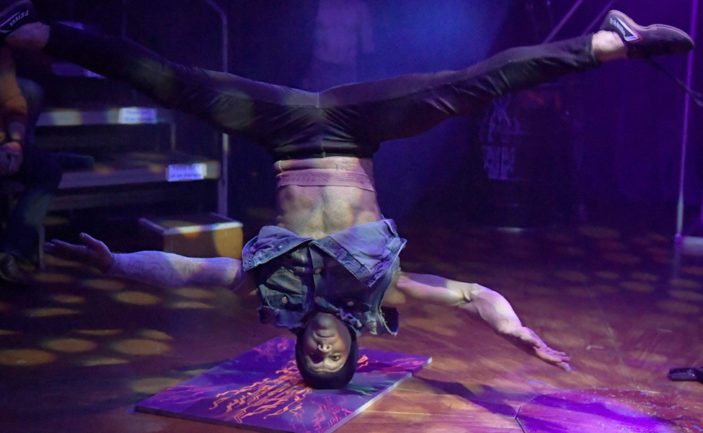 A lone wanderer stumbles amongst a crew of meta-human misfits in a dystopian world, industrial, cyberpunk in the not-too-distant future. This is the Barbaroi and this is her initiation.
The stage is stripped, stark, future industrial and feels like a movie set. A driving contemporary musical backdrop includes artists such as NIN, Radiohead and early Bowie. Against this scene, six performers on stage intermingle and bounce off each other in a clever way. It’s clear that the audience are in for a treat.

The six young performers are strong and agile.  They work as a tight team, yet they also get time to show their individual skills. The acrobats climb and writhe over each other in dramatic ways, creating a tower so tall it touches the ceiling of the Spiegeltent. The juggler cleverly uses the other performers in his hoop routine. The energy is infectious. A couple of the shirtless muscled performers display their strength and skill on hanging ropes or cords. There was a moment where the mechanism jammed, but it was resolved quickly. To the performers credit the show carried on.

This year the Spiegeltent is in its own hub in Hindmarsh Square, which makes it feel exclusive and underground. Between acts which include Reuben Kaye and children’s show Circus Wonderland – A Mermaids Tale, there is entertainment outside in the square, such as singers and jugglers.

Back inside in the Barbaroi, other performances include a tight-rope style walk on flexible glass panes, more feats of strength and balance and acrobats literally jumping through hoops. The  cyr wheel performance was particularly talented considering that the stage was not much larger than said cyr wheel. There are no safety nets in this show. The fast pace is very entertaining for the audience which consists of a range of people from families to older attendees. It really is a case of something for everyone.

It’s refreshing to watch a show full of original acts, where the performers seem to enjoy themselves as much as the audience.

The reviewer attended the performance on March 10th