Adelaide Festival Review: The Picture of Dorian Gray paints a convincing picture of a timeless message 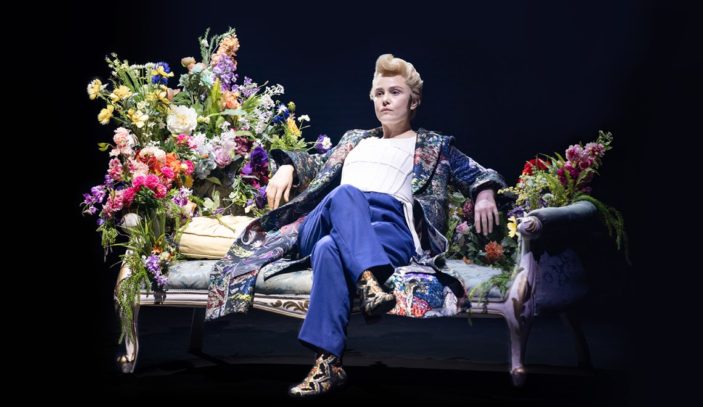 The recent renovations to Her Majesty’s Theatre in Adelaide have been in keeping with the charm of the old building, while modernising it to a current standard. More room in comfortable seats, an additional dress circle, better bar facilities; these all add up to a sympathetic improvement of a classic theatre.

What better place to present Oscar Wilde’s cautionary tale of Dorian Gray? Despite being Wilde’s only novel, amongst his many plays and poems, this well-known story has been adapted as a play by Kip Williams, Artistic Director of the Sydney Theatre Company. His legacy at the STC is impressive and the skill that he possesses in directing a play of this stature is obvious. His work in directing short films has clearly influenced the course of this one-woman show.

Eryn Jean Norvill has the herculean task of playing all the characters in the story. She also comes with a good resume of shows from the STC, as well as the Western Australian Symphony Orchestra and Melbourne Fringe.

The starkly minimalist stage is the work of designer Marg Horwell with a similarly impressive catalogue of works with the STC. All that is visible on the empty dark stage is a massive projector screen and two video cameras. Like the first tentative brushstrokes of a painting, these simple basics build into something more intense over the course of the two-hour play.

Initially there are three characters played by Norvill. Lord Henry Wotton is visiting his painter friend Basil Hallward. She manages to convey the dialogue of each with a motif of their character. A cigarette for Lord Henry, a brush for Basil. Interspersed is the narrator. Speaking to the cameras, her images are flashed onto the large projection at the front of stage and she conveys each character seamlessly.

When we first meet Dorian Gray, black clothed assistants perform a wig and costume change on Norvill right in front of our eyes. It’s a credit to the suspension of belief that the transition is also seamless and believable. More props are bought in – a gigantic vase of flowers for example. This acts as a foil, enabling two characters to interact on screen, one pre-recorded, one live.

Much like a painting, whose layers are built up over time, the layers of props, sets and screens are added to the story. As in the book, we understand how beautiful the painting of the fine young man is, without ever needing to see it.

Moments of artistic licence add to the amusement of the story, with a funny fart joke not out of place at all; one that I’m sure would have tickled Wilde’s fancy as much as the audiences. There are moments of pantomime, Punch and Judy style puppetry, and overall a genuine charm in the acting. Each character is convincing as if they were all played by separate actors.

The timeless story of the attraction of youth meant that the anachronistic use of mobile phones with their flattering affects was entirely in keeping with the overall theme. Dorian’s visit to the opium dens in the style of 24-Hour Party People was similarly inspired.

An enthusiastic standing ovation at the conclusion of the show from the capacity crowd was well deserved. The supporting team is what makes the show run like clockwork to allow the audience to sit back and enjoy the show. A tour-de-force production that will stay in your mind for a long time.

The reviewer attended on 14th March

The Picture of Dorian Gray plays at Her Majesty’s Theatre for the Adelaide Festival.