You Are Not My Mother is an extremely effective horror flick that blends filial drama and powerful frights: TIFF 2021 Review 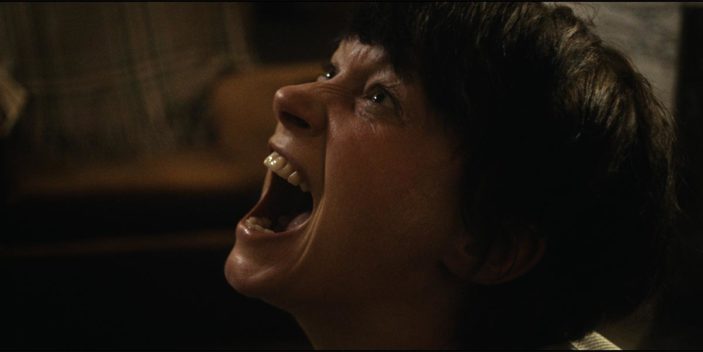 You Are Not My Mother tells the story of Char (Hazel Doupe), a struggling teenager who is living a self-sheltered life, drifting through school with good grades despite the bullies, all while having to take care of her mother Angela (Carolyn Bracken) and grandmother (Ingrid Craige). Her relationship with her mother is distant, after a strong bout of depression which saw her mother disappear for a period of time.

Ever since her mother’s sudden return, Char notices some changes that prove to be quite positive. However, her grandmother thinks otherwise and, over time, Char’s views of her mother are becoming stranger and stranger, until it seems that Angela might be undergoing some sort of transformation.

You Are Not My Mother is the feature-length directorial debut of Irish filmmaker Kate Dolan, best known for her music videos for rock band Pillow Queens, and horror short Catcalls. For her debut film, she has blended native folklore with a simple, effective premise (done in films like The Babadook, The Fly and many more); in this case, the toil of caring for a loved one who is slowly regressing in physical and mental capacity.

Dolan handles the characterizations well. Through the slow-burn pacing, she provides her characters with tried-and-true motivations, identifiable emotions and compellingly flawed dimensions that make them remarkably human. Char is believably stuck between a rock and a hard place in regards to her living situation – the bullying, the family turmoil, her burgeoning coming-of-age – and the audience can easily sympathise with her as it is shown with visual verve, even with the limited settings. The framing by Narayan Van Maele makes fine use of the weather, reflecting the moods of the characters succinctly, without the need for exposition that could drag out the taut runtime.

The performances from the central trio also give life to the characters, making for both emotionally stirring drama and easier scares. Craige lends a sense of loving warmth and enigmatic protectiveness to the part, making her character understandable, though there’s doubt as to where her motives truly lie. Bracken chews the scenery, bridging the gap between moments of stillness and unwavering ferocity, showcasing an amazing physicality. She also shows a serenity that makes for a believable, if now broken, bond between Angela and Char. All in all, it’s a fantastic performance. Last but not least is Doupe, who handles the progression of her character arc effortlessly, exuding vulnerability, angst and drive through her expressive eyes.

The characterizations also lend power to the filial drama, making them agonizing in the character’s seething anger and ongoing stress of the situation they are in. As a result, it’s very easy to empathize. Dolan’s handling of them works so well sometimes that it can come off as subversive; playing off the audience’s expectations as to who to root for, as well as cinematic clichés, one being the expected disrespect between mother and grandmother.

Equally, Dolan in no way slacks off in the horror department, and her handling of the film’s tension is a true standout. She deftly plays around with sound design (led by Dean Murray and Brendan Rehill), as she makes the bouts of emotion in the set-pieces feel excruciatingly elongated, before releasing them at the proper moment and making the scares satisfyingly effective.

The visuals also work effectively, as she relies more on the power of suggestion in a less-is-more approach. Much like with the sound, the dark lighting plays with the audience’s expectations, as she reveals the threat in startling ways. One scary sequence involves Angela feeling nauseous in front of the sink, and one would expect that she would try to induce herself to vomit but that is immediately subverted in a way that provides ample surprise.

As for the flaws of the film, the way Dolan hands its portrayal of mental illness does waver a bit into farce, as it becomes quite clear that Angela’s affliction cannot be summed up with a medical explanation. And yet the characters around her choose not to see it that way. Also, there are some moments of supporting characters that are overplayed that they essentially become plot contrivances and devices i.e. the use of the school bully and her place in the story.

Overall, You Are Not My Mother is an engaging mix of filial, folkloric, and social horror. It successfully transcends small budget limitations and plot contrivances, thanks to wonderful performances from the female ensemble, a slow-burn atmosphere and crunchy sound design.

You Are Not My Mother screened as part of this year’s Toronto Film Festival. For more information head to the official TIFF page.