Last week’s episode ‘The Six Thatchers’ (Series 4 Episode 1) received some mixed reviews in the media. Some were praising, others were less positive. The Guardian’s review even resulted in co-creator and the episode’s writer Mark Gatiss rebutting their critique in verse. The episode for most felt like a step away from the format we’ve been used to seeing, whether this was deliberate or accidental, in the end it doesn’t matter as what’s done is done. The biggest shockwave, the death of Mary Watson, will now result in tidal wave ripples that affect not just the characters but also where the story goes. This week’s episode ‘The Lying Detective’ has us entering into much darker territory, particularly with Mary’s ominous posthumous message “Go to Hell, Sherlock”. Tread carefully, for ahead there be spoilers.

Where last week’s episode felt like a look into the life of Mary Watson (Amanda Abbington) and her mercenary assassin past, this week delves deeply into both John Watson (Martin Freeman) and Sherlock Holmes’ (Benedict Cumberbatch) lives. We’re immediately thrust into Watson’s PTSD, hallucinating his now dead wife and seeing a new psychiatrist, as well as avoiding Sherlock. Then there’s Sherlock, getting high on drugs, shouting Shakespeare’s ‘King Henry V’ speech and ranting about Culverton Smith (Toby Jones) being a serial killer. And then there’s Culverton, a famous, wealthy, entrepreneur and philanthropist and the man very publicly accused by Sherlock as being a serial killer. There’s something fishy about Culverton though, and despite John’s attempts to avoid getting dragged into the mess, Sherlock is desperate and alone. But has Sherlock gone too far with his drug-fuelled accusations this time? This might be a game that he can’t afford to play.

‘The Lying Detective’ straight out of the gates is a deeply intimate episode, directed by Nick Hurran and written by Steven Moffat. John’s PTSD comes to the forefront as he hallucinates Mary and is trying to come to grips with her death. We get to see Sherlock in full maniac flight as his drug taking begins to addle his mind and paranoia sets in. Then there’s the subtle hints dropped by Mycroft Holmes (Mark Gatiss) about Sherrinford, another Holmes sibling perhaps? Visually there are long close ups and focus shots on our characters. There’s less visual background and background noise to distract us. Where last week’s episode felt a bit of a mish-mash of elements thrown together, this one has the attention and story fall square on our key characters, Sherlock, John and Culverton. There are short bursts of comedy interspersed between the drama, tension and emotion. Something that has worked to great effect with this series as a whole. So tonally it feels similar to what we’ve seen before with BBC Sherlock.

If you hadn’t already guessed it by now courtesy of Cumberbatch and Freeman’s Hollywood A-listing, it’s pretty damn obvious that those two are magnificent, and here we see exactly why. Freeman encapsulating something we too often see in men, a stubborn refusal to accept help, the stiff upper lip and a man in denial. Cumberbatch, the wild and untamed addict, at a point where he can almost no longer trust his greatest weapon, his mind. And the most heartbreaking and heartwarming moment we see, is Freeman breaking down into ugly crying and Cumberbatch embracing him after the two finally reconcile. Whether you want to ship these two characters or not, it’s a touching scene that only these two actors could make work and feel truthful. We need to be able to operate in a world where men can openly show their emotion without being ridiculed or emasculated for it. This scene was beautiful in so many ways because of the chemistry between these two actors. 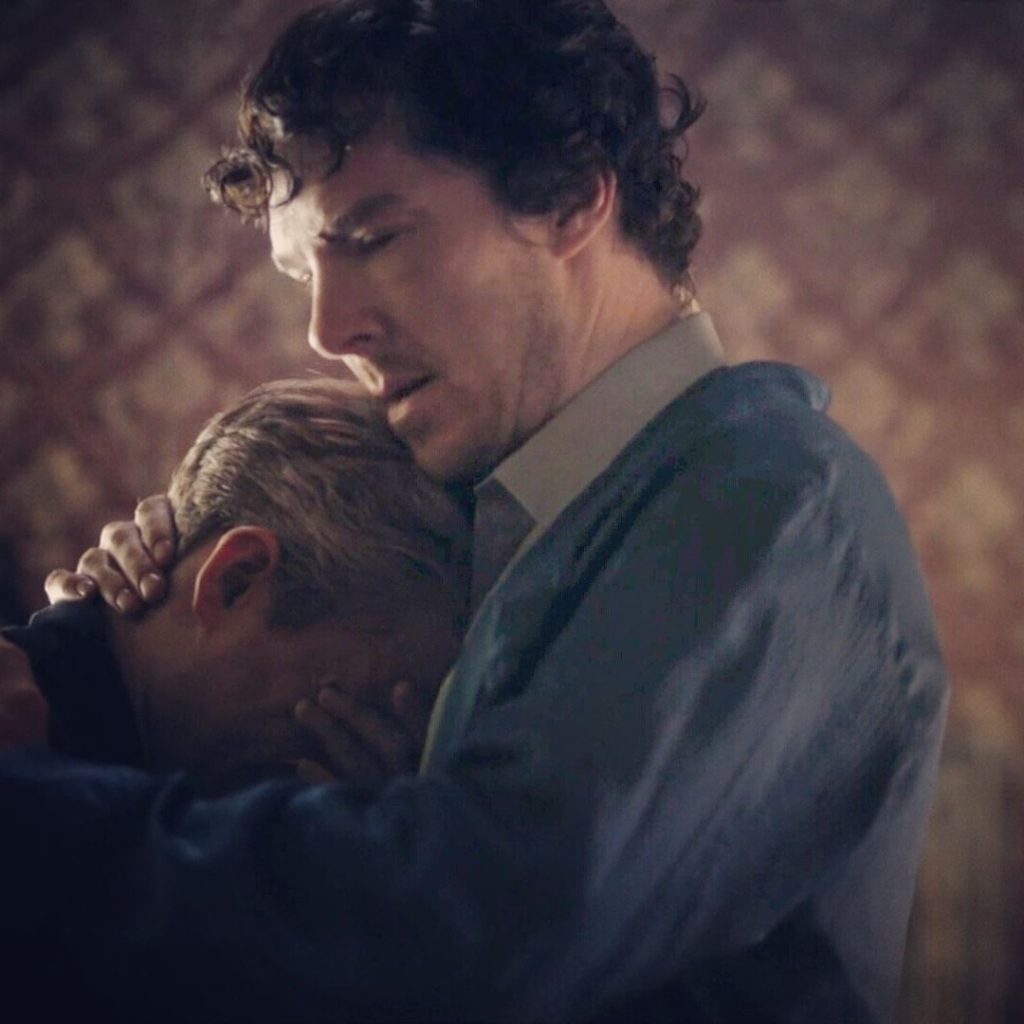 And in between the two of them, Amanda Abbington shines brilliantly, playing both the character of Mary, and John’s internal deductive monologue. She was such an exceptional addition to the cast with her sassy wit that it’s such a shame to lose her. And of course we can’t forget Toby Jones, who has on several occasions before terrorised us with his villainous portrayals. Here we see yet another man, similar to Moriarty and Magnussen, intent on manipulation and toying with people. It’s hard to imagine anybody else encapsulating Culverton better than Toby could. One of the best surprises in this episode comes from Una Stubbs as Mrs Hudson, she manages to one-up Sherlock and in one of the fiercest moments of the entire episode orders the British Government incarnate Mycroft with a “Get out of my house you reptile” as well as calling him an idiot only moments earlier.

Once again the visual effects team work their magic in bringing Sherlock’s deductions to life, particularly that window and note sequence. This show has come leaps and bounds from when we first gawked in wonder at all the little words floating around Sherlock’s head in the first episode back in 2010. And clearly a little product placement with an Aston Martin car chase won’t go astray either.

And really it wouldn’t be BBC Sherlock if we didn’t get served up an enormous “holy moly where did that come from?” twist in the dying minutes. The introduction of Euros Holmes (performed by Sian Brooke) – the Holmes sibling we suspected would show up – but is the Holmes’ sister not brother. The reveal was a head-spin as Euros managed to fool not only Sherlock (pretending to be the daughter of Culverton) but also John (pretending to be the woman on the bus he had a fleeting text affair with *and* his new psychiatrist) but all of us in the audience too. So clearly she is not to be meddled with if she can outsmart our heroes. The ‘Sherrinford’ clues that we saw in both this and last week’s episode may have been a red herring, or may be fully revealed in next week’s episode, we will just have to wait and see. 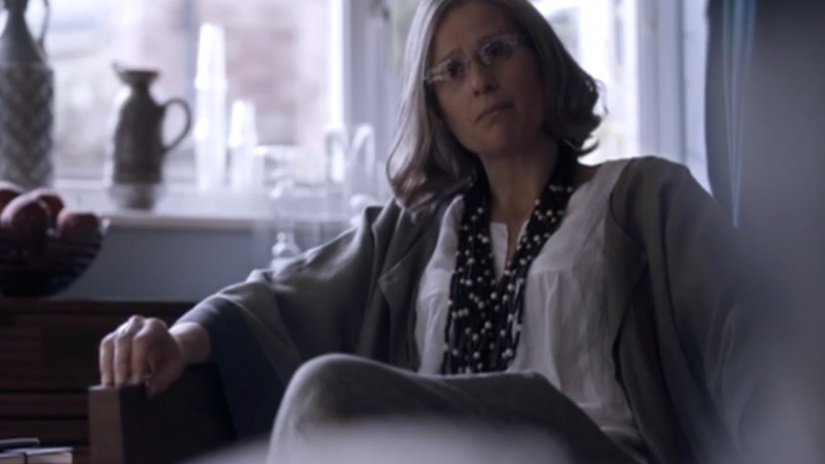 I did have a couple of minor quibbles though, as I was able to guess fairly early on what was going on and that Sherlock being “off his tits” was just a ruse (or at least a complex one in which he purposefully drugged himself). Also the estranged pair of Watson and Holmes end up seemingly putting their differences behind them a little too quickly. One of the most emotionally charged scenes (besides the one mentioned above) is when Sherlock attempts to attack Culverton with a scalpel, only for John to disarm him in a fit of rage and lay a beating into him. It would have been good to see that tension last a little longer but admittedly we know that it would be impossible for the show to keep them apart for too long also.

‘The Lying Detective’ may have subtly given itself away in its title, and it does suffer a couple of minor story and character based quibbles. However this felt more like a return to form and tone as compared to what we saw last week. It also is probably one of the most visually intimate episodes we’ve had from BBC Sherlock. The introduction of Euros Holmes also throws a huge spanner into the works, as it seems the Holmes’ sister may come to blows with Sherlock, John and Mycroft. The next installment titled “The Final Problem” seems more ominous now than ever.

BBC Sherlock is available to stream exclusively on Stan Australia.