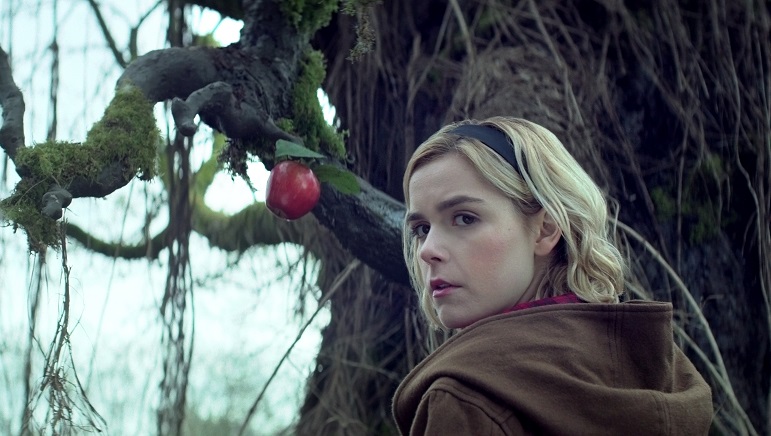 Back in the mid 1990’s Sabrina The Teenage Witch took the original Archie Comics character and gave her a more kitschy comedic vibe. With Sabrina often having to learn deep moral lessons after her attempts at magic go awry. But if you ever did read those original comics, you’d be aware that Sabrina and co had a much darker, grimmer tone. So here’s where Netflix and some of the production team from Riverdale come in. The Chilling Adventures Of Sabrina (aka CAOS) opts to go down a more faithful adaptation route when it lands on Netflix from 26 October.

The creator of the Sabrina graphic novel Roberto Aguirre-Sacasa steps in to helm the television series. Which means that aesthetically it shares a lot with its comic heritage, including a ghoulish credit intro made up entirely of comic panels and vignettes. The series is set in Greendale, which might sound familiar to fans of its sister show Riverdale (also on Netflix in Australia). There’s almost no correlation between the show narratives though, and Sabrina prefers to subject its characters to walking down a much darker path. It has been rumoured though that a potential crossover could also be in the works. 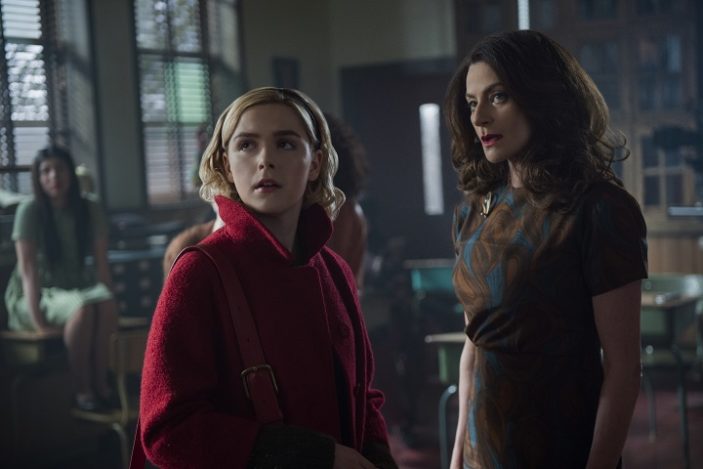 We meet Sabrina, the half mortal, half witch trying to navigate her life as both a normal teenager and also being part of the supernatural realm. She has a boyfriend, and school friends none of whom know of her other life. She’s also part of a Satan worshipping coven of witches, with the Dark Lord himself bent on acquiring Sabrina’s soul for nefarious purposes. So we often see her straddling both high school drama and the shadowy occult dimension, torn between her love for her friends and a normal life and the power that comes with being a witch.

Kiernan Shipka (Mad Men) plays our feisty, but sometimes stubborn heroine. Shipka drives her with an energy that makes her likeable but on occasion frustrating, as teenagers tend to be. Her aunties Zelda and Hilda played by Miranda Otto (Lord Of The Rings) and Lucy Davis (Wonder Woman, The Office) respectively are an absolute treasure. Otto playing the calculating and icy of the elder sisters, whilst Davis brings her wit, warmth and charm to the softer younger aunty. Rounding out the core family unit is Chance Perdomo’s Ambrose, an enthusiastic pansexual warlock who is housebound in the Spellman House that also operates as a mortuary and funeral home, because of course. And Sabrina’s familiar Salem, though this time it’s not a talking puppet cat.  Doctor Who’s Michelle Gomez gets to twist her sinister self as Miss Mary Wardell, one of Sabrina’s teachers but with her own shady agenda. Whilst Richard Coyle gets to also join in on the devilish shenanigans as Father Blackwood. 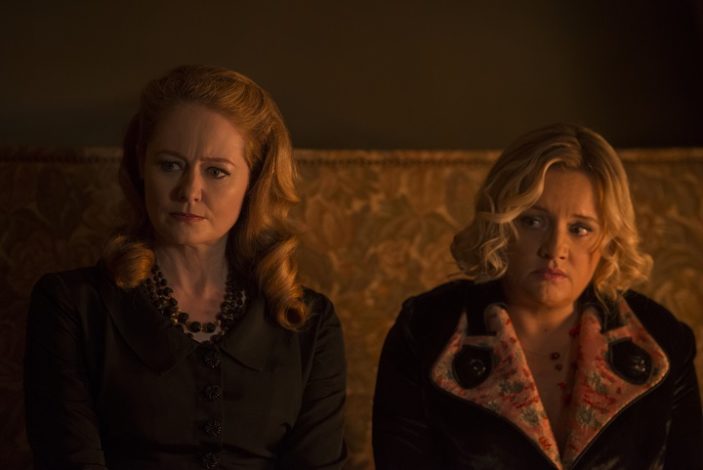 Being of course about a teenage witch, we get to see Sabrina’s life both at her normal school Baxter High and her supernatural college The Academy of Unseen Arts. The latter being a bit like Hogwarts, but run by the shady Father Blackwood and his dastardly trio of student minions the Weird Sisters, lead by Tati Gabrielle’s Prudence. It’s  a little disappointing that we don’t get to spend more time at The Academy, since it’s here that Sabrina is meant to learn magic but she seems to learn more under the tutelage of her aunts than at the college itself. And whilst Sabrina tiptoes back and forth between the two, we get a little insight into each of her somewhat nerdy and woke friends, Roz (Jaz Sinclair) and Susie (non-binary Lachlan Watson) and her boyfriend Harvey (Ross Lynch) the latter is nowhere near as vague as the 90’s version and constantly has Sabrina’s best intentions at heart but it would be nice to see him have a bit more of his own agency too.

The show has a duality to it, as it examines both real world issues, like bullying, LGBTQ relationships, isolation, and book bans. As well as tapping into demonic possession, ghosts, and witch trials. The show itself is obviously dark in nature and tone but also visually dark to watch too. With some of the shots done at Baxter High School or other “less creepy” locations filmed with a grey or washed out hue, and often reverting to using soft focus on the background. Constantly reminding you that even when something scary isn’t happening on screen, it’s probably just around the corner.

The Chilling Adventures Of Sabrina feels like if you got an enormous boiling pot and threw in the teen highschool angst of Riverdale, the horror elements of Stranger Things, the bonds of family from Charmed and the feminist power of Buffy The Vampire Slayer. It conjures a new, dark and edgy twist to the genre of high school dramas that will appeal to younger audiences but also has enough villainous fun for the older crowd. Something wicked this way comes, and it arrives on Netflix on 26 October.

Chilling Adventures Of Sabrina premieres on Netflix this Friday.