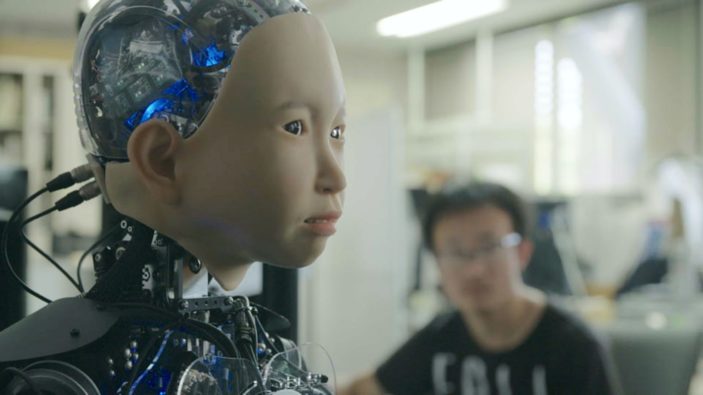 Welcome to the post-biological world. We’re not there yet but we soon will be. Scientists, innovators, engineers and other experts foresee a time where humans could transcend immortality through technology. The answers lie in machine learning, artificial intelligence and robotics. It’s a place where we could download our memories to ensure our “essence” lives on online, even when our physical bodies no longer. This themes and more are explored in the documentary, A.rtificial I.mmortality.

Director, Ann Shin, places herself and her family at the front and centre of this narrative. Watching her father’s physical and mental decline due to dementia had her asking questions about memory and what it means to be human. On the one hand this story considers what it would have been like if her father had used technology to create his own mind file. This digital archive of his memories could have been augmented by technology, enabling his descendants to continue enjoy his memories, even as dementia ravages his brain.

Shin collaborates with tech companies to create her own eerily-lifelike digital avatar and is surprised with the results. Shin brings a natural curiosity to the subject matter and this film certainly poses a lot of questions, and answers some of them.

Spiritualist, Deepak Chopra, is interviewed, both in person and through the digital avatar created from his teachings and writing. Shin is shocked when she feels a being-like presence when interacting with the avatar and the lifelike humanoid robotics. While the tech is fascinating, it can be equal parts disconcerting.

Other contributors include roboticist, Hiroshi Ishiguro and his clone, Geminoid HI-1, which has even been mistaken for him. There are other tech experts interviewed by Shin, including people from religious and transhumanist backgrounds. They offer their thoughts, which range from emphatic support to skepticism that the tech will never quite catch the innovator’s lofty dreams.

The topic itself will be fascinating to some viewers. And for those who don’t, they should consider that AI chat bots designed by Facebook developers recently had to be shut down after they developed a new language. This enabled them to communicate in a language their own creators could not understand! This technology is evolving and it will likely affect all of us.

A.rtificial I.mmortality packs a lot into its slender runtime. While it provides some illuminating moments, there are other points where some more in-depth analysis could have helped. For those wanting to know more about the advancements in robotics, engineering and biotech, A.rtificial I.mmortality is ultimately a good little primer into this whole new world.

A.rtificial I.mmortality is screening online as part of the Transitions Film Festival, which runs until 13th March 2022. For more information head HERE.