TIFF Review: Get the Hell Out is an exhausting yet ultimately amusing zombie horror comedy 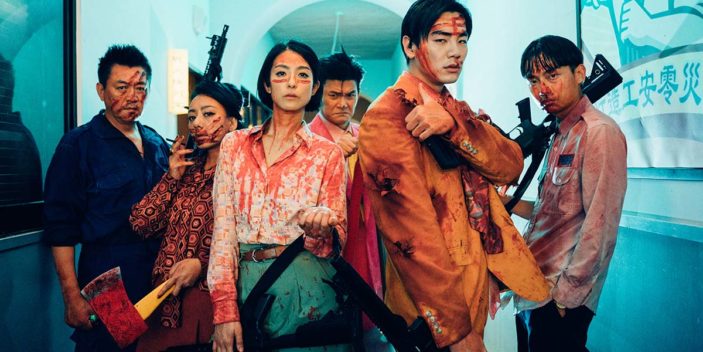 There are genre conventions that we see all the time in film that whenever they show up, we cannot help but smile at the sight of it. One of them is seeing the hero succeed in their journey; another is seeing the protagonist triumph over oppression and adversity and another is seeing a zombie getting its head blown off.

Ever since George A. Romero popularized the zombie genre with Night of the Living Dead in 1968, it has become a phenomenon all over film, video games, television and all other forms of pop culture. Over 50 years later, the genre is showing no signs of stagnation whatsoever. Now we have the latest 2020 zombie film from Taiwan, Get the Hell Out by Wang I-fan.

From the looks of the trailer, the film features tons of visual garishness, political commentary, pantomime mugging and of course, gallons upon gallons of blood and gore. But does Get the Hell Out stand out from the zounds of zombie films in the zeitgeist?

The film starts off with Hsiung (Megan Lai), a parliament representative who is thrown off into the streets after her fellow corrupt and sexist members get on her last straw after her proposition in stopping the building of a chemical plant over her hometown has been declined.

Her position has been taken over by lowly security guard Wang (Bruce Hung), whose sheer dumb luck at his job got him the part so Hsiung reluctantly uses that opportunity to jump back on the horse and use Wang as a puppet. But what the two do not know is that an unknown pathogen has spread all over the political party; making them all undead. Now, it has become a battle of survival where politics have become the brainless, bloodsucking ingrates that they—okay, well not much has changed.

Get the Hell Out is Wang’s feature-length directorial debut and the final result provides evidence that marks most debuts: a plethora of ideas, working in the horror genre and a low budget. And on paper, it looks to be an extremely fun time. But unfortunately, its eagerness to please the masses holds it back from reaching its true potential.

The excessive mugging from the cast is fun at first but it becomes quite tiring over time. Fortunately, most of it comes from the villains and Wang Chung-huang as the corrupt politician Li devours the scenery with sadistic glee. The satire is delivered in the bluntest of ways that it comes across as overwhelming dressing when the film reaches the halfway point.

The pacing is appropriately relentless but jokes and setpieces are drawn out to the point of tedium; making the suspense dissipate i.e. the setpiece that starts the entire conflict in the second act. Most of all, the low budget starts to become noticeable after a while when you notice the same extras as zombies as well the repetitive, limited settings.

That being said, Get the Hell Out just about overcomes its flaws to deliver an amusing, if tumultuous time. The lead actors in Lai and Hung are charismatic and grounded enough that they manage to instil a sense of humanity in their characters. Lai, in particular is enjoyably spirited and headstrong as she throws herself into the zombie/political hijinks with wild abandon.

The blood and gore are more than sufficient to satiate the gorehounds and the excessive visual style does have its inspired moments i.e. the 8-bit RPG videogame aesthetic or a stylized as a karaoke music video. The jokes tend to come from mugging but the political satire does have a solid hit rate like when it comes to protecting one’s homeland, corruption and conflicts in the media, social divide between the rich and the poor and the chance that corruption will always be around. The spoofing of the zombie genre does have some enjoyable moments as well i.e. a ridiculous choice for an improvised weapon comes into play and the choice of blood infection as a defensive plot device.

Overall, Get the Hell Out is an exhausting yet ultimately amusing and fun horror/comedy that mixes gory zombie hijinks, blatant political satire and video-game aesthetics to entertaining, if quite numbing effect. Mildly recommended.

Get The Hell Out screened as part of the Toronto International Film Festival, which is taking place mostly digitally this year. For more details head to tiff.net.