The Rescue is an emotionally rousing & suspenseful documentary about the Tham Luang cave rescue: TIFF 2021 Review 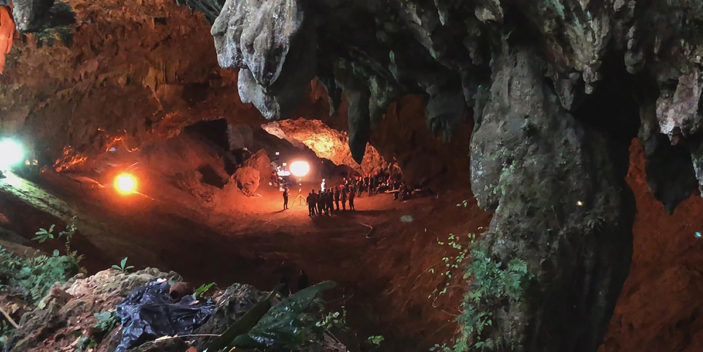 “There is a difference between knowing the path and walking the path.” This is a quote from the 1999 sci-fi hit The Matrix by the Wachowskis. Why is this being quoted, you ask? This quote was stuck in this critic’s mind as he was watching the latest project from documentary filmmakers by Jimmy Chin and Elizabeth Chai Vasarhelyi.

The pairing is best known for their stellar work with Free Solo (following the work of American rock climber Alex Honnold) and Meru (which follows the journey of trekking through the Meru Peak in the Indian Himalayas). All films provided sound presentation, stellar filmmaking and an immersive sense of storytelling that becomes gripping for all audiences, even when one knows the conclusion and destination of the story.

For their latest film The Rescue, Chin and Chai Vasarhelyi chronicle the 18-day story of the Tham Luang cave rescue; which involved the rescue of a junior soccer team (consisting of 12 players and one coach) whom were stuck in a cave after it became flooded. Does the pairing’s latest project live up to the high standards of their prior filmography?

The story itself is extraordinary and has been known worldwide. From the moments where the cave divers rescued four Thai crewmembers in the cave prior to the rescue of the soccer team to the ludicrous plan to anaesthetize the team before extracting them outside the cave, it almost sounds like a movie. But Chin and Chai Vasarhelyi treat the story as both an engaging experience as both a know-how of the workings of the rescue and as a poignant look at the power of the human spirit.

One of the elements that makes The Rescue so involving with its storytelling is its seamless interlaying of recreated footage and the actual footage recorded during the rescue. The feel of the cave setting, the darkness of the underwater footage and the claustrophobic feel of the cramped settings are so palpable in their portrayal that it becomes almost unbelievable in a way that you feel like one is watching a movie.

The exploration of the fascinating strategies of the cave rescue is examined thoroughly, as the film documents the emphasis on safety and resilience. Alongside the recreated footage, the filmmakers throw in succinct visualizations to show the scale of the operation, which spanned 4 kilometres from the location of the team to the entrance.

The frustration, hesitation and pride are all on display; with moments where the Thai SEALS having to admit they know little about cave diving to one of the subjects initially rejecting Thailand’s approach to religion and faith and the many times the cave divers saying that the rescue attempt is impossible.

The editing of the talking head interviews with the storytelling is sharp as it aids the escalation of the stakes involved in the storytelling. The integration of the perspectives of the subjects (especially when their fears and their knowledge of prejudices of their professions are put on display) are tactfully set up but it never feels that the filmmakers are aiming for emotional exploitation or manipulation. Some revelations are undeniably funny and even surreal including how footage of the cave diving was leaked due to the divers being unbeknownst to the Wi-Fi accessibility in the cave and the timing of the cave being fully flooded as soon as the rescue attempt was completed.

Truth is stranger than fiction and watching this doco from the makers of Free Solo and Meru had me on an emotional rollercoaster. Gripping, illuminating and heart-warming, Chin and Chai Vasarhelyi have delivered another belter with The Rescue. Highly recommended.

The Rescue is screening as part of this year’s Toronto Film Festival, which is being presented both in-person and virtually between September 9th and 18th, 2021.  For more information head to the official TIFF page.