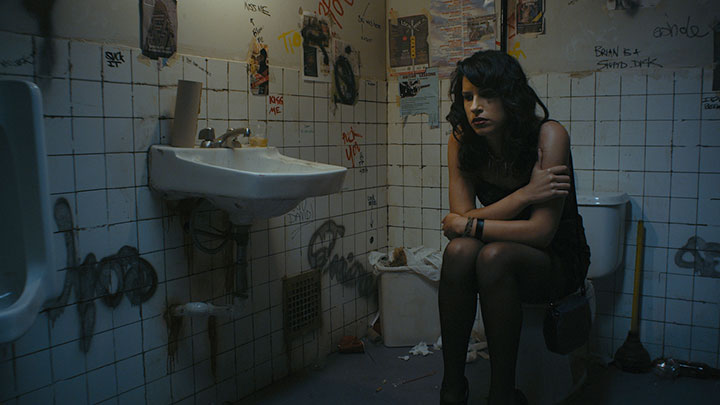 Style-wise, this image is an early tone-setter. The film tacks back and forth through the relationship, from their fumbled, awkward first encounter, to the small gripes that brew into inescapable differences over time, and a post-breakup oblivion of sexual exploration and soul searching. And while a post-mortem of the defunct relationship is the narrative vehicle, the real story is Shireen’s personal journey, navigating her twenty-somethings as a gay, Iranian-American making her way in Brooklyn’s hipster heartland.

The film is the feature-length fruit of a web series created by and starring Akhavan called The Slope (a similarly-toned Brooklyn version of Portlandia, crossed with The L Word), that plays out the daily absurdities of middle-class, gay hipster privilege through the eyes of self proclaimed “superficial, homophobic lesbians”. That both the series and the film have been compared to Lena Dunham’s Girls, is unsurprising: Shireen, much like Dunham’s Hannah, is cut from the same self-involved, Gen Y middle class cloth, fraught with crippling narcissism and mired in some very tricky first world problems.

And like Girls, it would be easy (and lazy) to dismiss the film as shallow, same-same, self-consciously ironic navel-gazing. But Appropriate Behaviour ups the ante by confronting these issues from a queer, non-white perspective with a refreshingly non-hysterical portrayal of a moderately conservative Iranian family. See especially: a delicately played coming out scene between mother and daughter.

And of course there are the hilariously incisive digs at white western perspectives on the Arab world, like Shireen’s employer linking the geopolitical situation in Iran to an article he read in Vice Magazine about the underground Hip-Hop scene in Tehran. But no one is safe from ridicule – from an artist roommate specialising in “sandcastles incorporating found objects”, to an underwear saleswoman using bra metaphors for self-worth. And, as with the very best comedy, Akhavan’s writing calls us out on our prejudices, flushing out any dormant, unquestioned presumptions we might never have known we were harbouring.

Appropriate Behaviour premieres at Sydney Film Festival tonight, June 6th and screens again on the 8th and the 10th. More details and tickets are HERE