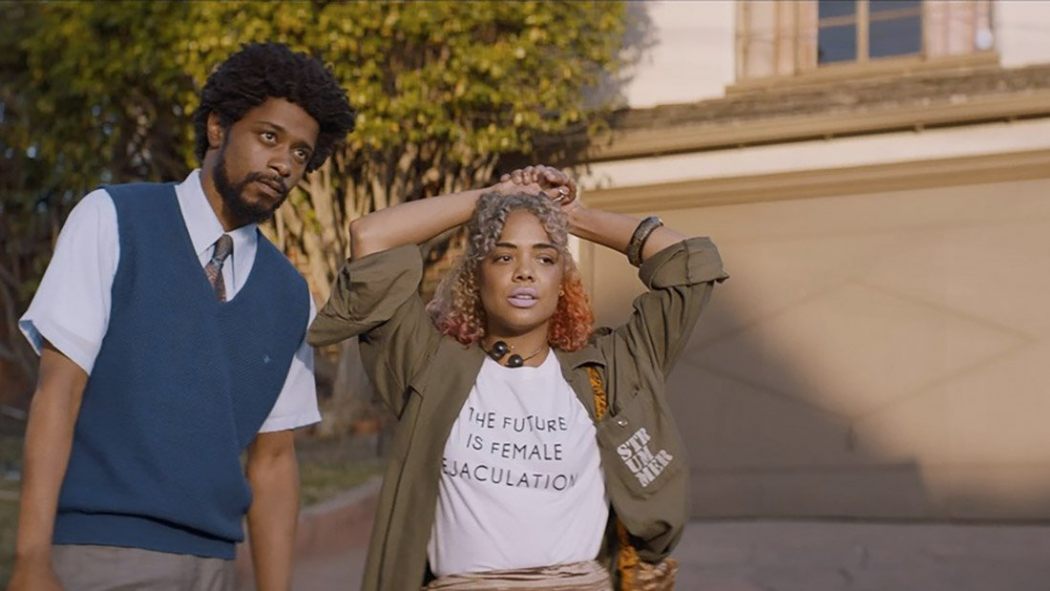 Boots Riley has over two decades of powerful, biting and important work behind him as emcee of The Coup, so Sorry for Bothering You, his directorial debut, isn’t as big of a leap as it appears to be for the artist. Well, it’s not big in the sense that smart political satire is anything new for Boots, and there’s no doubt that his work with the seminal rap band has given him a unique approach to the film world. That approach is translated into this multifaceted comedy-drama which aggressively tugs on the threads of institutionalised racism, power structures and forced-labour and watches them all fall into a surreal, mind-warping dystopia of anthropomorphism, cocaine and orgies. It’s as weird and lovingly unique as it sounds.

The film follows Cassius Green (Lakeith Stanfield), a smart, underemployed Oakland resident who just landed a job at a run-down call centre with creepy over-zealous managers and constant pressure to become a coveted “power caller”. At home, he has urgent need to pay rent to his uncle ( a barely-there Terry Crews) and find time to spend with his girlfriend and colleague, Detroit (played by the brilliant Tessa Thompson). He’s not able to just keep his head down and rise through the ranks though, immediately rushing into the deep-end, deflated with a nervousness that has people hanging up on him, left, right and centre, rendered brilliantly by Boots with a hyper-comical string of Green visually dropping into each callers home to interrupt their lives.

By all means, Green sucks at his job. That is until he receives some sage advice from older co-worker Langston (Danny Glover): “use your white voice”, a technique that bleeds into montages of rolling success and high-fives that, while cliché, are always underpinned by Riley’s penchant for irony. The Dave Chappelle-esque impersonation of a middle-class white man, dubbed with a heightened reality, is but one example of Riley’s meticulously detailed and sly confrontational approach to these issues, and it makes for one incredibly hilarious and intensely watchable experience.

The success is interrupted by Green’s colleagues Squeeze (Steven Yuen) and Sal (Jermaine Fowler) who are more concerned with unionising than keeping their heads down, tugging the protagonist in another direction so that he must choose between the man and the stick. It’s a hard decision, especially when the former brings you to a two-inch-line-of-coke snorting mogul (a very energetic Armie Hammer) who hosts lavish orgies, treated by Riley as symbols of excess and temptation. It’s at this point the movie veers from it’s sledgehammer-strong microcosm of office politics to a broad, conceptual masterstroke of metaphors and grotesque imagery, sweeping Green into a nightmarish absurdist comedy that is rendered beautifully by Riley’s eclectic style, which despite being a bit too broad at times (particularly after those aforementioned two-inch-lines-of-coke are introduced), heralds an new, wildly original, high-minded voice in satirical comedy.

Sorry To Bother You premiered at SXSW in Austin, Texas. It’s released in the US in July.