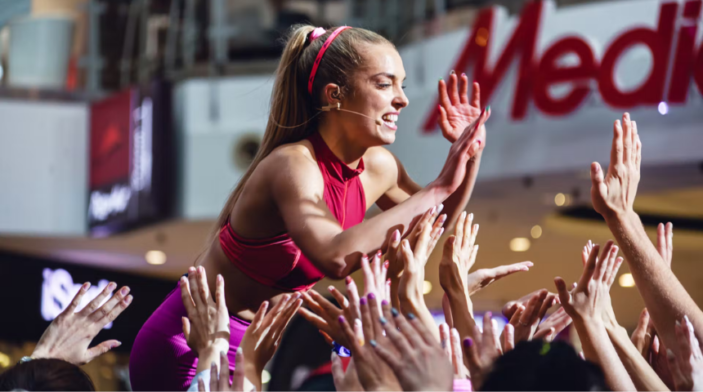 In Polish-Swedish film Sweat, audiences meet social media influencer Sylwia. Fit, pretty, and young, Sylwia (Magdalena Kolesnik) motivates her 600,000 followers to work out and be healthy. But this dramatic character study is about more than just a pretty face; it’s a subtle look at the opposing forces between our public and private personas in real life and online.

Writer/director Magnus von Horn has put together a compelling and, at times, rather ambiguous film. On the surface, his central character appears incredibly glamorous. Her followers love her and believe she has it all. Yet when the camera stops rolling, Sylwia grapples with loneliness and disconnection, with few close relationships, save for her adorable pooch, Jackson.

The story centres around three days in Sylwia’s life, and star Kolesnik manages to pack so much emotion into her performance. We get the upbeat and peppy almost cheer-leader type championing health and fitness. Woo! And then, on the other hand, we get a sad and lost young woman, who wants nothing more than to be loved, and have a meaningful relationship. But when Sylwia finally publicly lets down her guard in an emotional video – only to receive backlash –  things get interesting.

Perhaps the biggest surprise comes after a harrowing event when, after discovering she has a stalker, Sylwia instead comes to realise his humanity, ultimately finding that they are both yearning for a connection. Prior to this there had been moments where the film almost had an almost thriller vibe, but ultimately Sweat is all vulnerability and subtle character study.

Intense closeups of Kolesnik add a claustrophobic, invasive aspect to the piece, juxtaposed against the bright colours of her outfits and upbeat synthpop music and Roxette’s “The Look”. They also prevent things from getting too dreary, offering morsels of joy without having to detract from things feeling “real” in the often artificial realm of social media.

Ultimately, Sweat is a film about a fragile character living her life in a glass house. While many of us think that influencers are vapid and have glamourous lives, this film asks us to rethink and consider their humanity. The platforms may present a character we can enjoy, but Sweat instead scratches the surface to see what’s behind those bright lights and big smiles.

Sweat is screening as part of the Europa! Europa Film Festival. For more information head HERE.