Sundance Film Festival Review: In the Same Breath is a sobering, harrowing account on the origins and cover-up of COVID-19 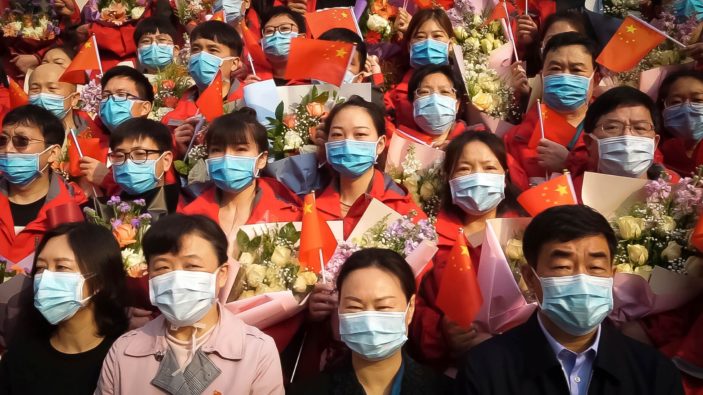 There really is no way for yours personally to say this in a pithy fashion so it is best to just say it straight. One of my most anticipated films this critic wanted to see was In the Same Breath by director Nanfu Wang, a talented documentary filmmaker whose work in indicting the government workings in China are startling, harrowing and thought-provoking experiences.

Her debut film Hooligan Sparrow was a scrappy (due to both logistic and budgetary issues) yet undeniably powerful look into government corruption in terms of injustice around victims of sexual assault, rape and underaged prostitution; a piece of work that put her on the map due to her utmost diligence in providing such toxic footage that could have gotten her arrested.

Her third film One Child Nation (co-directed by Jialing Zhang) showed remarkable improvement in Wang’s filmmaking prowess and effectively highlighted a dark chapter in China’s history over the immense ramifications of the One Child Policy through various family members, civilians, members of the government, talented artists and many more.

Now we have In the Same Breath, a stark indictment on the actions and reactions of the Chinese government over the COVID-19 pandemic. Will the film reach up the high standards that Wang has lived up with the rest of her filmography?

In the Same Breath starts off with footage of the celebrations of the 2020 New Year over in Wuhan, with the people blissfully unaware of the impending danger that is about to set upon them. It all starts with a small purported rumour that eight people had spread false news about a virus that is present in their hospital workplaces. The idea of such a thing sounds ludicrous so it is basically set away due to blissful ignorance.

But the cases kick in and spread like wildfire. So much so that Wang’s daughter and husband are in a town 200 miles away from Wuhan, they become personally affected. Wang then uncovers the extreme lengths the government goes through to cover up the origins of the virus. One example is how the Communist Party tells the hospital staff to act in propaganda videos to show that everything is fine while another is that the Party mitigates any sense of threat of the virus by treating it as minute as the common cold.

A major discovery is how the hospitals are so full, the sick are essentially left out in the street and their fates are cruel to the point that the mention of the word “hospital” in terms of trips comes down to a death sentence. But what is really shocking is the fact that in America, their way of dealing with the virus was similar between how China dealt with the virus. The cover-ups due to economic factors, upholding reputations, brainwashing the public, misinformation, negligence etc is enraging and jaw-dropping content.

One would think that exposing this type of news in the era of social media would be easy but the sheer control the Chinese government in terms of censorship carries far and wide. When journalists like Chen Qiushi, Li Zehua, Fang Bin, Cai Wei, Chen Mai and Zhang Zhan try to report their findings; all are either arrested, imprisoned or vanished into thin air.

Then there are the heartbreaking accounts from people who have lost their loved ones from COVID-19 that could have been easily prevented if the government had put their foot down sooner. One subject had lost her husband because either the hospitals were so full or were rejected by hospital staff because the cover-up was so powerful. The staff were so scared of losing their jobs that they had to reject patients who had the virus in order the cover-up to succeed.

Filmed during the pandemic and assembled remotely, the amount of footage recorded by Wang and numerous journalists (some are anonymously credited as cinematographers with the use of letters eg. Anonymous D and Anonymous Y) is astounding that it recalls the dangerous covert filmmaking that Wang did in Hooligan Sparrow.

The film does tread into recognizable territory but that is due to the fact that there are other recent documentaries out there that deal with the actions and effects on COVID-19 like Totally Under Control and 78 Days. However, it is through Wang’s sharp, no-nonsense and understanding delivery and her personal presence in the narrative (which makes a truly thought-provoking impact in terms of her inaction of the issue due to her trust in American health care) that makes the film stand out on its own two feet. There is even a “what if?” scenario in the third act that surprisingly does not come across as hokey due to its lack of sentimentality in its approach but an understated seething anger.

On that note, In the Same Breath is a harrowing and beautifully empathetic documentary from director Nanfu Wang about the treatment/cover-up of COVID-19 in China and the USA. It is familiar in parts but the unravelling in the astounding similarities between the two continents is downright angering and astounding. Highly recommended.

In the Same Breath is screening as part of this year’s Sundance Film Festival, which is being presented virtually between January 28th and February 3rd, 2021.  For more information head to the official Sundance page.