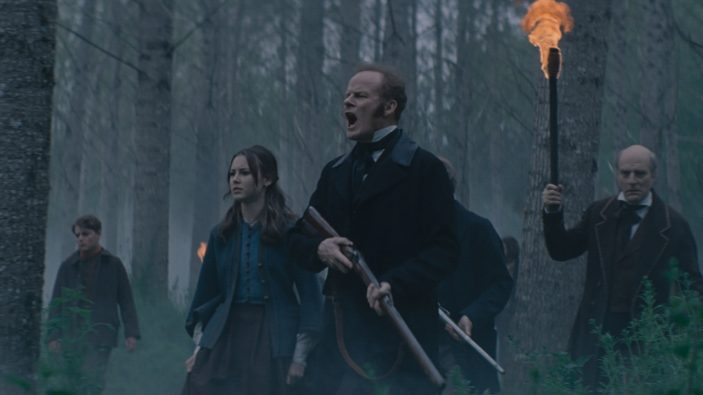 Set in the late 1800s, a pathologist John McBride (Boyd Holbrook) has been sent to a distant village that has been terrorized by a wild animal, resulting in numerous deaths. He has been sent there to find a missing child; whom the parents (Alistair Petrie and Mary Reilly) presume with utter conviction that he is still alive. During the ongoing investigation, McBride discovers the dark past of the village that may have something to do with these attacks; something that may border on something far more personal and haunting than one would expect.

Fashion photographer turned director Sean Ellis has returned to the horror genre after The Broken for his latest effort Eight for Silver, a solid genre effort that manages to spit-shine a new sheen on the werewolf mythology. It is a bit of a shame that the film could have excelled to something more as its flaws prevent it from doing so.

Much like The Broken, Ellis cherry-picks his horror influences; mainly delving into Hammer horror films like The Curse of the Werewolf or plastic reality ‘80s horror A Nightmare on Elm Street and The Thing. The difference however is that in Eight for Silver, Ellis has figured out the difference between derivative and homage.

His fashioning of horror tropes (with loving reverence and without the cringe) with his skilful directorial eye (he is also credited as cinematographer) pay off handsomely; lending to some legitimately horrifying sequences including a sequence where a bunch of children frolic around a scarecrow and a sequence where McBride and his collaborators examine a corpse that recalls the best of body horror.

It helps that the actors sell the drama here, with Holbrook finally having a leading role on film that he can sink his teeth into. With an understated nature, an inner conflict of cynicism and hope and a convincing British accent, Holbrook does a damn good job as McBride. But the heart of the film belongs to Mary Reilly. Playing the mother of the missing child, Isabelle Laurent, Reilly lends a quiet dignity to the role that makes her inner anguish deeply felt; particularly when her role becomes more prominent in the third act.

Unfortunately, there are some nagging flaws that prevent Eight for Silver from being a standout horror genre entry. Firstly, for a filmmaker who is so proficient with visuals, the choice in making the werewolf through CGI is a major creative misstep. The imagery of the werewolf looks so outdated that it takes the audience out of the film. To be fair, Ellis does abide to the “less is more” attempt of showing the creature. But when its presence is fully shown, the suspense is slightly nullified.

Speaking of outdated, there is a horror trope present in the film that provides a nasty aftertaste. The use of the Romani people (or gypsies, as the film refers to them) being the harbinger of doom for the characters comes across as ill-judged and offensive. Now this may have been Ellis trying to comment on something thematic/social that would contribute to the story i.e. colonisation or land disputes. However, the setting of the film is never truly established for that type of intent to work. With characters who are French (who speak English), the use of Irish songs and English accents, it is hard to pin down where the story is set.

Overall, Eight for Silver is a gnarly piece of work that succeeds due to Ellis’ visual eye, the creative subversions of the werewolf mythology, the reverence to classic horror works and the performances from Holbrook and Reilly. Recommended.

Eight for Silver has screened as part of this year’s Sundance Film Festival, which was presented virtually between January 28th and February 3rd, 2021.  For more information head to the official Sundance page.