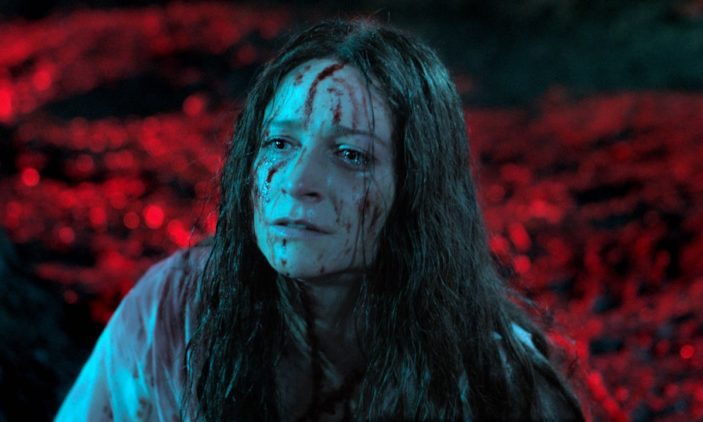 When a filmmaker decides to venture into the topic of filmmaking as a narrative, their efforts can be fascinating in terms of storytelling. When the horror film Censor had been announced as an entry for Midnight Madness at the 2021 Sundance Film Festival, it was particularly intriguing for a few reasons.

Firstly, the topic of ‘video nasties’ being a major theme in the film is an interesting choice as it belies many ideas to consider like the link between on-screen violence and the human condition as well as providing lots of horror references for genre fans and cineliterates [sic]. Secondly, the profession of film censorship has rarely been shown in cinematic storytelling. With those ideas in mind, Censor sounds like it could be something rather special.

Set in the 1985 United Kingdom, Niamh Algar stars as Enid, a film censor who is committed in nullifying the effects of cinematic ultraviolence as she dissects various horror films. Her sharp focus on the job has caught attention of her colleagues but what they do not know is that it is all tied to her dark history which involved the mysterious disappearance of her sister Nina; whom has been reluctantly declared deceased by her parents, much to her chagrin.

But Enid’s life takes a strange turn when she is given a film to censor called Don’t Go into the Church. She discovers that the events in the film are eerily similar to the events of Nina’s disappearance. Wanting to uncover what happened to her sister, Enid begins an investigation to find the director of the film, Frederick North, for answers. But the blurring of truth and fiction may be too much for Enid to bear.

Censor is the feature-length debut of Prano Bailey-Bond, who is best known for her work in horror shorts like Nasty and The Trip. Her skill in finding beauty in the macabre is evident here in Censor as she honours the ‘video nasty’ concept by capturing all what made the films of that era so memorably gruesome and impactful. The VHS visual aesthetic, the change in aspect ratios, the garish lighting (all ably staged and edited by Annika Summerson and Mark Towns), the synth score (Emilie Levienaise-Farrouch), the grisly practical effects, the wonderfully overstated film titles like Cannibal Carnage and Extreme Coda (which serves the purpose of being darkly hilarious as a foreshadowing punchline); they are all wonderfully replicated on screen.

However, Censor is not just a film that was made for nostalgic purposes but it is also a story about the descent into obsession and madness while under the pursuit of closure. On that note, Bailey-Bond and her crew have succeeded with flying colours. Bailey-Bond’s reverence to the horror genre may make the story feel familiar but her storytelling chops makes the material feel fresh.

The events of the ‘video nasties’ provide thematic power to the story. The nature of censorship is examined very well here as the film accurately shows the hypocrisy of such a practice; especially when it does not discern the difference between tone as well as the power of suggestion. Bailey-Bond and her screenwriter Anthony Fletcher are smart to know that censorship does not always apply to film but also to human nature.

Despite what humanity would say, it is that very same darkness within us that is embodied in moments where characters would mock Enid for her work. The battle with one’s best self and one’s honest self comes into play when Enid encounters people that threaten her safety and how it comes back to the traumatic event of her Nina’s appearance. Without delving into plot spoilers, the fight-or-flight situations Enid finds herself in are not always justified for reasons one would think (i.e. the use of film sets); making the blur between fantasy and reality murky.

The film meshes the many fears like fear of the unknown (which is reminiscent of the film Spoorloos aka The Vanishing) to the fears that women experience (too many films to mention) with an investigative plot through the mindset of a woman who is desperate for an answer. Therefore, Bailey-Bond makes the events alternate back and forth between realism and artifice, making it fun to discern the blurring of the two viewpoints. The editing and cinematography are both indicative of the change in viewpoints, especially when they both go from being precise in timing and staging (much like the working nature of Enid) to being unruly (much like the films Enid watches).

Leading the film with utter conviction is Algar, who shows remarkable emotional intelligence as Enid goes from a woman with sharp intent to a woman whose obsessions on her past and beyond. The way Algar embodies the vulnerability of Enid through various tells like constant scratching and lip biting feels natural and never histrionic. The supporting cast all provide credibility and some much-needed mirth eg. Felicity Montagu as a film archivist.

Special mention should be given to Michael Smiley. If one were to cast an actor in their niche horror film to play a reprehensible character of sorts, they should always ask themselves “Is Michael Smiley busy?”. In the case of his work in Censor, he is both creepy and charismatic as a film producer who is so slimy, he leaves a trail wherever he walks.

Overall, Censor is an enjoyably reverential and visually stimulating psychological horror experience that sharply deals with the harms of censorship and how our inner demons can fester in our minds; led by Bailey-Bond’s visual eye and Algar’s stellar acting. Highly recommended.

Censor is screening as part of this year’s Sundance Film Festival, which is being presented virtually between January 28th and February 3rd, 2021.  For more information head to the official Sundance page.