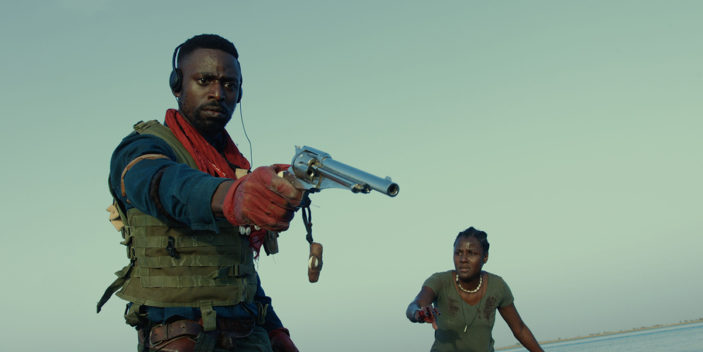 Saloum tells the story of three mercenaries Chaka (Yann Gael), Rafa (Roger Sallah) and Minuit (Mentor Ba) who are tasked to extract a Mexican drug dealer Felix (Renaud Farah) and his cargo of gold and drugs away from the chaos of the government overthrow of Guinea-Bissau and transfer to Dakar, Senegal. But when their means of transport fails to take them to their destination, they find themselves stranded.

Eventually, they make a stop into a small village where they intend to find fuel and resin in order to get back on track. But the people there are immediately suspicious of the three; including an acute police captain Souleymane (Nidiaga Mbow), an eerily accommodating patriarch Omar (Bruno Henry) and a mysterious signing deaf woman Awa (Evelyne Ily Juhen). This is despite the best efforts of the trio trying to blend in. Little by little, their motives are eventually revealed and it culminates into chaos. However, that is the least of their problems.

It takes a skilful hand for a film such as this to work as well as it does; particularly as its story shifts tones and genres with gleeful abandon. Thankfully, writer/director Jean-Luc Herbulot and writer/producer Pamela Diop are up to the task with Saloum. Running at a tight 80-minute runtime, Herbulot and Diop establish the setting and characters. The opening credits introduce the actors as well as their roles. The opening scene involving the coup d’état sets up the stakes and dramatic foundation of the characters, with efficiency and style. Alongside the peppering of cultural context including child slavery and war profiteering, the drama is surprisingly sound.

There are moments of clever foreshadowing (including Chaka’s reticence toward water) and well-timed flashbacks that pump up the drama. The actors all hold up their end of the bargain as they lend nuance and heart to their characters; especially from Gael (who lends confidence and vulnerability to Chawa), Ily Juhen (who brings a sense of tenacity and air of mystery to Awa) and Ba (lending some gravitas to his world-weary character).

The action scenes pack a lot of punch due to the hard-hitting sound design and the gritty hand-held camerawork (courtesy of cinematographer Gregory Corandi) while the musical score by Reksider lends an alluring feel that is both otherworldly and culturally striking. But the surprise component of the film is its genre shifts. The story goes from crime drama to survival action flick to supernatural horror smoothly and it is all founded on a solid cultural foundation of African folklore fused with Western genre aesthetics to make it palatable, unpredictable and entertaining.

Overall, Saloum is an entertaining genre-mashup that delivers on its promise with thrills and chills; solidified by Herbulot and Diop’s supervision and a fun sense of style. Recommended.

Saloum is screening as part of this year’s Toronto Film Festival, which is being presented both in-person and virtually between September 9th and 18th, 2021.  For more information head to the official TIFF page.